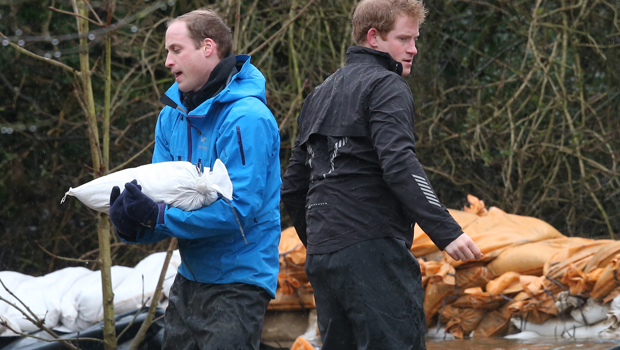 Just when you thought it couldn’t get any more embarrassing for America’s self-appointed monarchs, His Highness King Barack and the Sovereign Queen Michelle, two kids go and shame them in front of the whole world.

This time British Princes William and Harry did the honors.

Coincidentally, on the same day that Michelle Obama’s airplane closed down the Aspen Airport so she and her personal entourage could go skiing at Buttermilk, over in Great Britain, 80-mph winds, “landslips[,] and fallen trees caused havoc on the rail network, and some arriving flights were diverted from London’s Heathrow to other airports amid fierce bouts of wind.”

So, while wannabe American royalty were on their 23rd vacation or so, the heir to the throne of Britain and his little brother Harry spent the day on the southwestern coast of England sandbagging a burst wall to protect the property of lowly British citizens.

For the entire world to see, as they slogged through the mud working next to ordinary citizens, Wills and Harry were emulating their late mother, Princess Diana.  Also setting a high bar for their heirs were “Let’s Move!” Michelle and Barry the Sandbagger, who spent the day knee-deep in powdery snowflakes and sand traps.

Interestingly, neither prince chose to tour swamped properties from a helicopter.  More importantly, the brothers had nothing to gain; British monarchy doesn’t need to pretend to befriend chubby Republican governors before an election, further unpopular policy, politick, or screen for potential victims to exploit in a fundraising ad.

Instead, while Sasha and Malia, who’ve been taught to be altruistic once a year on “Pardon a Turkey Day,” were being tutored by example on how pampered elitists behave, two selfless princes voluntarily toiled away in the muck and wind-whipped rain, dressed in unpretentious rain slickers and galoshes.

The president chooses to ignore five million ObamaCare victims whose lives have been turned upside-down not by Mother Nature, but by the purposeful policies of Obama’s oppressive Nanny State.   On the other side of the ocean, in another Nanny State, Queen Elizabeth II set a kindly example by sending food and bedding from “the royal farms at Windsor to farmers whose land has been inundated.”

Over five thousand miles away from this act of generosity, Barack Obama kicked back in 82° weather on the luxurious Annenberg estate in Rancho Mirage, California.  It’s a stark contrast to two gallant men, free of ulterior motives, unloading sandbags in a River Thames village where the river burst its banks.

But, in fairness, as a prerequisite to three days of unencumbered golf, back in Palm Springs Obama did take part in an obligatory dinner with Jordanian King Abdullah II.  Then, in Fresno, California, prior to enjoying that much-needed post-Hawaii vacation R & R, Obama performed a civic duty himself when he pushed global warming nonsense by discussing federal aid for drought-stricken farmers.

Come to think of it, it’s too bad the British royals weren’t available, because the president could have really used some star power to lend credibility to a $1-billion “climate change resilience fund” he’s proposing.

Compliments of the American taxpayer, President Obama could have flown the monarchs to Fresno aboard Air Force One.  Once the princes arrived, the president could have sandbagged…er, sorry, used his enviable charm to convince the princes to cite global warming as being responsible for the burst riverbanks and swamped property in England.

Then, when he was finished exploiting William and Harry to advance his own agenda, King Obama could have dismissed the princes and gone golfing.