Originally posted at American Thinker. blog Let’s face it — it’s exhausting leaving Washington DC early to stay in Hawaii for 17 days and then remaining behind for 10 more days to unwind at Oprah Winfrey’s multi-million-dollar Maui ranch. That’s why, when mid-February rolls around, the first lady starts to burn up with a cabin fever that can only be quenched with braised ancho-chile short ribs with hominy wild mushrooms and sautéed kale.

After all, the poor woman hasn’t had a vacation in nearly four whole weeks. The good news is that for Valentine’s Day and President’s Day, right on schedule, Michelle and Barry part ways and spend three days as far away from each other as humanly possible. Michelle grabs her snow goggles and her two daughters and heads for Vail or Aspen and Barry grabs his nine iron and heads for the links.

This year was a little different though, because the first couple had just hosted an expensive State Dinner at the White House where Michelle Obama showed up in a $12K Carolina Herrera gown. That’s why the general consensus was that there’s no way, after eating chocolate-misted ganache and emerging from those heated Monet-inspired tents, that the Income Equitists would dare gas up Air Force One at $181K per hour and jet westward for a post-party breather.

Yet here we are, just days after François Gérard Hollande, the socialist leader of France, headed home and wouldn’t you know it, vacation getaway history is repeating itself.

To rest up after that grueling trolley ride to and from the French-inspired Blue Room to the massive tents on the South Lawn, both Michelle and Barack have taken off — separately — for an extended weekend, with travel expenses and security compliments of the beaten down, worn out, discouraged proletariat.

Before heading to dinner with King Abdullah II of Jordan at Sunnylands in Rancho Mirage, California, Barack attended the House Democratic Issues Conference in Maryland. Between those and other official duties, the president, along with his spiked saddle shoes and nerdy shorts, plan to squeeze in an extended golf weekend. As for Michelle, minus a token poor person onboard, she, Sasha, Malia and company landed in Aspen under tight security, which delayed the arrival of other affluent vacationers trying in vain to get to Aspen for their own ski weekends.

With hubby in California, the first lady has three days to make like a Sochi skier and schuss her way down the Buttermilk Mountain bunny slope. Pitkin County Sheriff Joe DiSalvo said he was informed of the trip three weeks ago, which means one week after her arrival home from Oprah’s place, Michelle scheduled her next getaway.

Economic malaise or not, by most standards, this Obama vacation thing has gotten way out of hand. 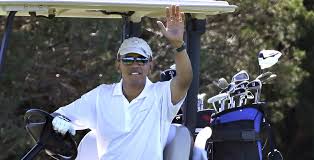 Who gets to go to Hawaii at Christmas, Martha’s Vineyard in the summer and Colorado in February, and then round out the tri-annual excursion schedule with trips to various locales around the globe? Sometimes, in June and October, Michelle uses private time with Sasha and Malia as an excuse to drag along ‘close friends’ to Spain or to visit Africa to fill up on oodles of fried fat cakes.

If an old Hollywood movie were to depict the Obama lifestyle, Barry and Shelley would be Fred Astaire and Ginger Rogers in Shall We Dance. Meanwhile, like Tom Joad in The Grapes of Wrath, a huge swathe of Americans shuffle around in a dustbowl of despair.

Adding to the outrageous nature of the president and first lady taking luxury vacations while the rest of the nation languishes in a state of unrelenting financial, social, and emotional misery is the fact that the real costs of the Obama jaunts are virtually impossible to document.

Tom Fitton, President of watchdog group Judicial Watch, claims “The Obama administration has simply stopped voluntarily producing information about the costs of the travel… They are in cover up mode.” And well they should be! Although Mr. and Mrs. Obama do pick up the tab for some personal expenses, when hotel, security, car rentals, and airfare expenditures associated with the 20+ vacations are factored in, the estimated cost to taxpayers totals more than $18 million.

What’s unclear is whether those calculations include the alleged $10 million in public monies Michelle Obama was said to have spent on personal vacations between 2009 and 2011.

Either way, Fitton is convinced “The Obamas are abusing the perks of public office,” and that “Taxpayers shouldn’t be footing the bill for their luxury travel.”

With all due respect,Mr. Judicial Watch sounds rather judgmental. Isn’t Tom aware that as far as Michelle and Barry are concerned, every vacation is a “working vacation?”

That’s right, despite every second of everyday that they spend frittering away taxpayer money; no one is more concerned about income inequality in America than Barack and Michelle Obama.