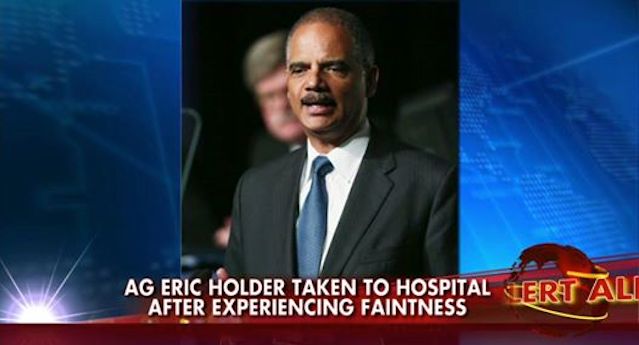 Just days after Attorney General Eric Holder informed states with laws against gay marriage that they didn’t have to obey those laws, the Constitutional critic found himself hospitalized for “faintness and shortness of breath.”

At a meeting of senior Department of Justice staff, where the discussion probably revolved around how to come up with more ways to flout the law, Mr. Holder started experiencing “symptoms.” Lucky for Eric, he was close to MedStar Washington Hospital Center where, “as a precaution,” the attorney general was taken for further evaluation.

Quite unlike the justice system and the US Constitution, after being rushed to the hospital the AG, who was in good condition, rested comfortably.  According to reports, he spent the time at the hospital alert and conversing with his doctor.  Attorney General Eric Holder got to enjoy the benefits of the type of healthcare millions of faint Americans gasping for air on stretchers will no longer have access to.

Luckily, Mr. Holder was not in Georgia at the time of his health scare. Although Georgia is the only other place he’d be looked after just as well: Eric could have been rushed to Old National Gyn. There his “faintness and shortness of breath”would have been attended to by friends in the abortion clinic that his wife Sharon Malone is part owner of.

After all, it’s never too late to be aborted!

Unfortunately, indicted abortionist OB/GYN Tyrone Cecil Malloy who, in addition to aborting babies, was responsible for killing an abortion patient and who faces charges for Medicaid fraud, wouldn’t have been available to assist in caring for Eric Holder.

So it’s just as well the AG was in Washington DC when he fell ill.

Eric Holder was eventually released and spent the evening resting at home.

Let’s face it – Eric was quite fortunate in many ways. For example, he was in close proximity to a well-staffed, top-shelf hospital.

On the other hand, Border Agent Brian Terry and ICE Agent Jaime Zapata were not as fortunate. Both agents were shot to death with “Fast and Furious” arms provided to Mexican drug cartels by Eric and the unjust Justice Department, and bled to death in the desert.

Nonetheless, despite the controversy swirling around his multitude of scandalous Justice Department decisions, Eric Holder has reassured naysayers that he, with Barack Obama’s hearty ‘Amen,’ is “staying on.”

As of today, AG Holder has no plans on going anywhere anytime soon. Unless of course this second bout of  “faintness and shortness of breath” indicate that he may be going somewhere soon.

And if he is, nothing that he or Obama has to say about where he’s going will impact Eric Holder’s untimely departure.