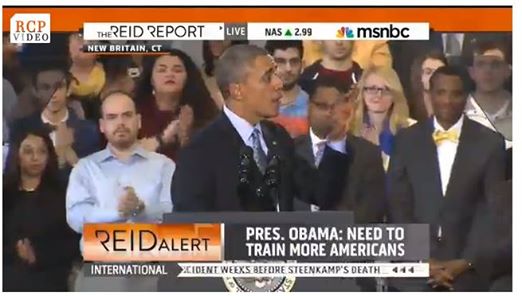 Barack Obama the Train Wreck said that the United States (also known as “we”) “need to train more Americans.”

Obama prefaced his training shocker with an advisory to the Central Connecticut State University audience in New Britain, Connecticut: they needed to “bend [their] knees” so they don’t swoon (as people tend to do) while he’s speaking.

What kind of training does the president think Americans need?

The seemingly potty-trained backdrop audience who clapped like trained seals seemed very well trained. One thing he’s right about, though: training is definitely necessary if Obama wants people to cheer when he talks about job creation in a state with 7.9% unemployment.

Other than those sorts of things, Americans probably could be better ‘trained’ to be more obedient and less questioning.  How about government-funded tutoring programs that “train” Americans to ignore the truth and simply swallow lies?

Even better, how about some sort of presidential commission to brainwash, er…train Americans to ignore what happened in Benghazi, forget about the IRS scandal, and praise Obamacare, even if they’re among the unfortunate six million who lost their health insurance?

How about ‘training’ Americans to embrace the prospect of all-encompassing NSA spying, applaud drone strikes on American citizens, enthusiastically relinquish our sovereignty, and give up our Second Amendment rights while arming drug cartels?

There needs to be an indoctrination program that can train Americans to think it’s a great idea to leave the borders open, use tax dollars to finance the first lady’s vacations, and fund the slaughter of the unborn.

Barack Obama has made it quite clear that, from where he sits, he and his cohort of trainers “need to train more Americans.”

The problem is, Obama wants to train “We the People” to be LESS American and be MORE Socialist, and a problematic document called the Constitution may get in the way.