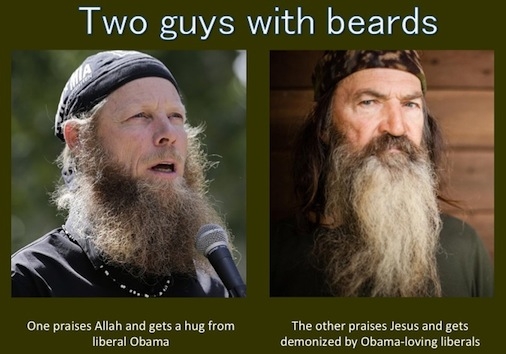 The Bergdahl affair is proving to be very enlightening. Take for instance the liberal hypocrisy concerning two guys with beards, both of whom have religious affiliations with credos that have strong opinions concerning homosexuality.

One of the two bearded fellows is Bob Bergdahl, father of recently-released POW Bowe Bergdahl.

Besides his whiskers, Bob seems to proudly exhibit a strong affinity for Islam, a religion that tolerates the mistreatment of women, children, and homosexuals, and has a violent faction that has killed thousands of innocent Americans. Bob is currently one of the two top recipients of the left’s politically-correct attention, protection, and affirmation.

The other one is the LGBT community. That’s where the duplicity comes in.

What’s uncertain is whether Bob the UPS guy from Idaho is a full-fledged radical Muslim or not, but based on his Muslim-style beard and Rose Garden comments, something’s clearly not kosher in Boise.

Bob Bergdahl showed up in the already rat-infested Rose Garden, where he demonstrated what he’s learned from five years of studying the Rosetta Stone Arabic edition and introduced America to Pashto, the language of the Pashtun tribe, which makes up the vast majority of the Taliban force.

Under the approving eye of Barack Hussein Obama, Bowe’s father Bob recited the most common expression in the Koran — “Bismillah ir-Rahman ir-Rahim” — which means “In the name of Allah, most Gracious, most Compassionate.” Quite frankly, this is not a typical utterance for a supposed Presbyterian from Idaho.

To be fair to a worried father, Bergdahl’s decision to do so might have had less to do with Islam and more to do with the unbridled exuberance of a man happy that his son and five senior leaders of the Taliban, one of whom is the former head of the Taliban’s army, were released from captivity.

As for POW Bowe, the New York Times claims the young Bergdahl wanted to renounce his U.S. citizenship, was “disillusioned with the Army, did not support the American mission in Afghanistan and was leaving to start a new life.” Those could be the reasons that Bowe, aka Abdullah, purportedly walked off base and joined the enemy. He taught Taliban fighters how to make bombs from mobile phones, and, according to one of his captors, even converted to Islam.

Bob, Bowe’s father, says that his son became so immersed in the Taliban culture that he completely forgot how to speak English. That must be why Bergdahl felt it was incumbent upon him to show off his own fluency in the tongue of the Taliban by expressing the victory call of Islam, which some say sanctified and claimed the White House for Islam.

Moreover, Dad, whose neighbors swear he still attends a Christian church, applauded the release of the Gitmo Five and, based on a suspicious deleted Tweet from his Twitter feed, seems anxious to see more of those in cahoots with his son’s abductors go free and get back to the business of blowing up Americans.

If Bergdahl the elder is sympathetic toward the cause of those who took his son hostage, then his behavior is more bizarre than if kidnap/rape victim Elizabeth Smart’s father Ed, after fighting for nine months to find his missing daughter, lobbied for her captors Brian David Mitchell and Wanda Ileen Barzee to be released into a schoolyard full of 14-year-old girls, which of course never would have happened.

So from all indications, Bob Bergdahl, whose Twitter follower’s page features progressive Bernie Saunders (I-VT) as well as a huge Arabic following, does seem to be orientated toward Islam.

Yet Obama, who vacillates between supporting the Muslim cause and planning to strategically erect LGBT memorials in National Parks, hugged the guy whose part-time religion flogs, stones, and hangs any and all members of Obama’s beloved LGBT community.

Which raises the question: What’s up with America’s “First Gay President” smiling and embracing a man whose second language includes terms that describe homosexuality as an obscene act (al-fahsha’) and abnormal (shudhudh)?

And then there’s the other guy with the big beard. That heavily whiskered gent is Phil Robertson, the patriarch of Duck Dynasty. If not for Phil’s accompanying mustache and camouflage gear, Bergdahl and Robertson could pass as members of ZZ Top. But what’s unique about the duo is not their resemblance to Billy Gibbons and Dusty Hill, but how the Islamic-leaning guy, despite his affiliation with a religion that harshly punishes homosexuals, has been implicitly validated by homosexual advocate Barack Obama right in the Rose Garden.

Meanwhile the Cajun, English-speaking Phil Robertson, who is equally verbal and unapologetic about his adherence to the Christian faith – which also condemns homosexuality – is consistently demonized by Obama’s friends and supporters and portrayed as a vile homophobe.

What is clear is that Phil Robertson identifies with a political ideology and religious inclination that makes him a target for unforgiving criticism from the left. Even though Bergdahl articulates tenets much harsher than Phil’s, Bob’s obvious liberalism, such as his support for “Crowdfunding the reforestation of Afghanistan tree by tree,” keeps him immune, regardless of the militant, anti-America nature of his beliefs.

So there is an upside to the whole Gitmo Five-to-one disgruntled-American-soldier tradeoff: If Barack Obama hadn’t flouted U.S. law to further his Islamo-centric agenda, Americans would have never gotten to meet the delightful Bob “As-salamu alaykum” Bergdahl, the man who regularly exchanges niceties with observant Muslims on Twitter, and has a curious propensity to speak to and advocate for the mujahedeen.