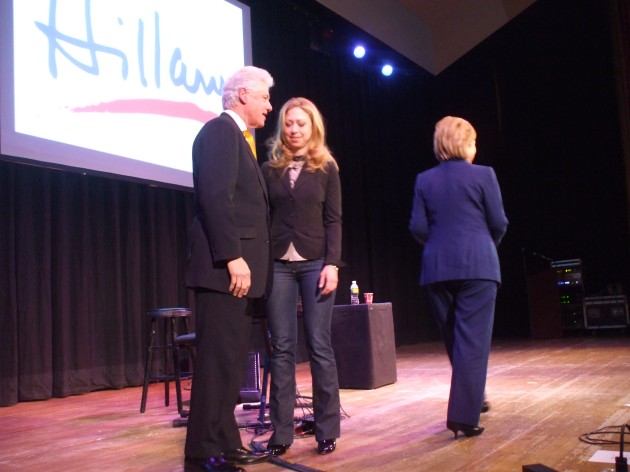 It’s been years since we’ve heard from Tricia Nixon Cox and Julie Nixon Eisenhower, the daughters of disgraced president Richard Nixon, who resigned in 1974 to avoid impeachment for a whole lot less than what Barack Obama does on a daily basis. But after all these years there is an initiative that may lure Julie and Tricia out of hiding into the spotlight called “Fathers Who Empower Daughters”, which is being sponsored by the G(irls)20 Summit.

The G(irls)20 Summit logo says, “3.5 billion ways to change the world,” and exists specifically to “economically empower and engage girls and women and to encourage G20 Leaders to invest in this untapped and valuable resource.”

The purpose of the “Fathers Who Empower Daughters’’ initiative is to ‘’Engage men and boys”, which G(irls)20 says is “important!” So, for Father’s Day, fathers are asked to record and post video saying “how have you, can you and will you empower your daughter?” And daughters are asked to “please tell us how your father has empowered you.”

Predictably, the pregnant daughter of an impeached president and a wife trapped in the grasp of extreme poverty while struggling to buy mansions, Chelsea Clinton, who is also vice chair of the Bill, Hillary, and Chelsea Clinton Foundation, is joining forces with G(irls)20 to publicly help her mom by lauding her dad this Father’s Day.

The other women and fathers who are determined to make Father’s Day all about daughters while ignoring sons are Holly Branson, whose father is Virgin Group’s Richard Branson, and Ziauddin Yousafzai, father to Malala Yousafzai, the young girl who was shot for protesting against the Taliban for education rights for Pakistani girls.

Although absolutely charming in essence, Chelsea Clinton’s description of her father as a man who invests in women is laughable. The truth is, whether Chelsea Clinton sees her father as someone who empowers women or not, the man is a womanizing adulterer who cheated on her mother; who couldn’t have cared less about Chelsea having to endure the embarrassment of his infidelity; who lied under oath and was impeached, and based on the allegations of a number of credible women, could very well be guilty of rape.

But never mind all that. Chelsea spoke fondly about her ‘’supportive, nurturing and empowering father.’’ She looked into the camera and, didactically speaking in a monotone similar to her mother’s and shaking her head right to left and up and down in all the right places for emphasis, said Slick Willy “taught [her] the importance of doing right by [their] family.”

Isn’t this the guy who was having cigar sex with a White House intern in the Oval Office? Isn’t William Jefferson a skirt-chasing wolf with no scruples, who encouraged his equally unscrupulous wife to deflect public attention from his faithlessness by blaming his being caught with his pants down on what she called a “vast right wing conspiracy?”

Chelsea feels Bill “taught [her] the importance of…family” by making “every effort …to be home for dinner every night unless he was on another continent.” Someone needs to inform Mrs. Mezvinsky that Dad’s no family man, and being home for dinner isn’t worth much if father dear gets busy after dessert mussing up blue Gap dresses that don’t belong to her mother.

Sorry to have to say it, but if Chelsea Clinton is going to celebrate fathers who empower their daughters, in her case she’s celebrating a father who preyed on other men’s daughters.

Nevertheless, Chelsea did say that her father taught her to “always do what’s right…and what’s good.” She didn’t mention whether ‘’right and good” includes deceiving your spouse, swearing that you “did not have sexual relations” with a woman you were having sexual relations with, perjuring yourself under oath, or parsing the word “is” to avoid having to admit the truth to a nation you lied to.

Chelsea believes Bill is community-minded, and for that matter so is Hillary. Lest we forget, Bill, America’s “first black president,” exploited a community called Harlem and Hillary carpet-bagged her way all the way from Arkansas to Chappaqua to the Senate community.

In Chelsea’s ‘’Fathers Empowering Daughters” video she said Slick Willy always “challenged [her] to take risks, not unnecessary ones, but the ones that are necessary.”

Risks such as groping women in the hallway at the White House? Or beckoning a female registration clerk at a governor’s conference in Arkansas into your hotel room, complimenting her on her curves and then dropping your trousers and demanding she perform oral sex? Those kinds of “necessary risks”?

But most of all, Chelsea said she is “ultimately” grateful for the example Bill the über family man set for her as she and her husband Mark “think about starting [their] own family.”

Which brings us back around to the Nixon clan. If Chelsea Clinton can talk up dear old impeached Dad for G(irls)20, then certainly Trisha and Julie, whose dad at least was a faithful father and husband, should be allowed to post a Father’s Day video memorial too. And while we’re talking about empowering girls, Charles Manson has a daughter named Rebecca!