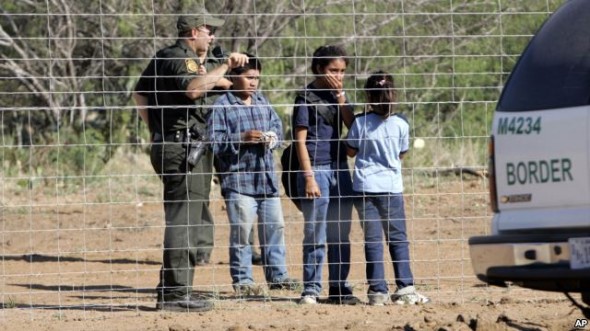 Sorry to be crude, but for all intents and purposes, America is currently the victim of a national rape, figuratively speaking – what our nation is experiencing on the southern border is a corporate violation.  Moreover, being implanted in the womb of what was once a sovereig n nation complete with boundaries and laws is an uninvited presence that, if it were a fetus, pro-choicers would heartily applaud terminating.

Instead, liberal pundits and politicians alike contend that America should never turn children in need away.  That’s why bleeding-heart types are now arguing that our arms need to open even wider to welcome in as many illegal children from the poverty-stricken nations of Honduras, Guatemala, and El Salvador.

What doesn’t make sense is the contradiction of this opinion when compared to the standard liberal pro-abortion mindset that maintains that a life of abject poverty is far worse than death, and being unwanted justifies obliterating untold numbers of unborn human beings.

Yet suddenly, despite the intrusion taking place on our border, those who normally justify abortion on demand seem overly concerned about the well-being of the destitute youngsters imposing themselves on not just one woman’s life, but all our lives – itinerant youngsters who, if they were traveling in the womb, rather than on foot, the left would enthusiastically abort.

Even Barack Obama, the most pro-abortion president in the history of America, justifies accepting the tsunami of children streaming in from south of the border by calling it a “humanitarian crisis,” which naturally necessitates the “saving of human lives or … the alleviation of suffering.”

The irony is that while Barack Obama is in favor of open borders to quell a so-called humanitarian crisis, he simultaneously supports, promotes, and encourages an ongoing humanitarian crisis caused by the abortions of 3,000 American babies a day.  Babies aborted in greater proportion by lower-income women who bought the liberal lie that economic status somehow determines the level of wantedness an unborn child should be granted.

Then, as if aborting Americans presumably destined for abuse and poverty while waving in the underprivileged who arrive here illegally weren’t hypocritical enough, needy children are not the only ones being allowed to violate our country’s sovereign nationhood.

Chris Cabrera, vice president of the National Border Patrol Council in the Rio Grande Valley, has confirmed that gang members from Mexico are among those gaining entry into the U.S., including some from the extremely dangerous Mara Salvatrucha (MS-13).

So are liberals who claim that abortion prevents the costs of future criminals now changing their tune and suggesting that the federal government accommodate murderous gang members – whether it’s through government entitlements or as lifetime guests of the American penal system?

And then there is the specter of the potential loss of life if a small-fry suicide bomber, carrying a backpack filled with more than just crumpled clothes and pictures of Mamacita and pretending to be a youthful Hispanic refugee, should happen to make his (or her) way across the southern border with the goal of martyrdom for Allah, Hamas-style.

Adding to that threat, in the name of immigration reform, the federal government’s hand is being extended to illegals, whose presence will likely cost untold numbers of unsuspecting Americans their right to life from the deadly-disease time bomb that could infect hundreds of thousands if not millions of Americans with lethal viruses that the U.S. had previously tamped down or nearly wiped out.

That’s why the question that must be raised is this: what is the logic behind liberals preaching the right to choose on the micro level and then, on a macro level, when it comes to things like ObamaCare and in this case illegal immigration, denying free Americans the right to choose not to be saddled with another nation’s chronically ill, lawless, and/or underprivileged children?

What kind of rationale justifies abortion as sparing the unborn from the future plight of poverty and abuse and then, in the name of compassion, imports thousands of illegal children destined to become lifetime welfare recipients?  That confusing contradiction also holds true for the children who, if not for abortion, liberals believe would be destined to a lifetime of protracted illness.

Moreover, what kind of ideology that, on the one hand, argues that abortion releases mostly underprivileged children from what would otherwise be a life of abuse, crime, and incarceration, while on the other hand, it argues to allow entry to even the most violent gang members, who brazenly tell Border Patrol agents that law enforcement has no control over their desire to break into a sovereign nation and wreak havoc?

Thanks to liberals’ upside-down reasoning, America has deteriorated into a place where leaders promote abortion for all the same reasons they are currently using to justify their acceptance of sickly, disadvantaged children and future convicts from south of the border.

The left maintains that in order to live a life free of sick and impoverished children, not to mention potential future felons, the freedom to have an abortion is crucial.  But then the pro-abortion party in power turns around and imposes the same human dilemma on its unwilling citizens whom its adherents claim abortion purges from American society.