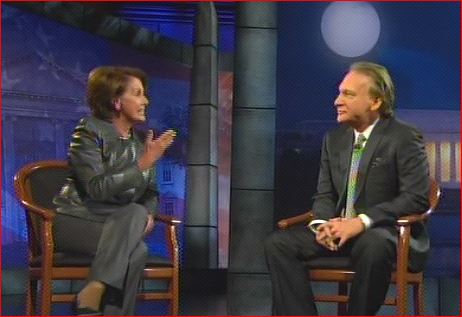 Dressed like an elderly, upscale biker chick in a leather jacket that she accessorized with $10,000 Tahitian pearls, Nancy Pelosi recently reemerged.  This time the House Minority Leader made an incoherent appearance on “Real Time with Bill Maher.”

After sharing the apocalyptic prophesy with atheist Maher that if Republicans retake the Senate “civilization is doomed,” the woman whose political party is currently in the process of dooming civilization uttered the following load of rubbish:  “Fear is a motivator, and we…” – as in Democrats – “are not fear mongers.”

Oh please!  When Nancy Pelosi says “hope,” does she mean “Hope and Change”-style hope?  Because if that’s what the aging septuagenarian is peddling, God help us all.

It’s funny to hear Nancy Pelosi project onto Republicans the very thing she is, which is a fear peddler.

This is the woman who, in the run-up to the failed stimulus bill, sounded an alarm to warn Americans that “Every week we don’t pass a Stimulus package, 500 million Americans lose their jobs.”

Besides being the person who, at the time, was second in line to the presidency adding another 200 million people to America’s census figures, Pelosi the Prophet apparently didn’t foresee at the time that six years after Obama’s “shovel ready” job-creating fiasco was passed, 92 million people, or approximately half of America’s working-age population, would be not working.

Not to mention the fear mongering that drove the rhetoric prior to the passage of the Affordable Health Care Act.  And speaking of healthcare reform, what exactly was the woman with the oversized gavel selling when she said that if the Republican’s “Protect Life Act” prevented Obamacare abortion funding pregnant ‘women [would] die on the floor?’

It was also Nancy Pelosi, San Francisco’s very own harbinger of hope, who warned America that if the House passed a bill that extended a federal pay freeze, it would “undermine the dignity” of a job that is, quite frankly, anything but dignified.

Speaking of federal workers, during the impending government shutdown of 2013 Ms. Nancy warned there would be a “strong negative” response from Democrats if Republicans didn’t comply with – you guessed it – Democrats.

Then, after the ruling that employers with religious objections could elect not to offer birth control as part of a company’s health care package, it was none other than anti-fear-mongering Nancy who warned Americans that they should “be afraid” of the Supreme Court.

Devout Roman Catholic that she is, Nancy Pelosi even felt it was incumbent upon her to write San Francisco’s Archbishop Salvatore Cordileone to ask him not to attend the Washington D.C. pro-tradition March for Marriage event this past June 14th.  Always the upbeat optimist, Nancy described the gathering as “venom masquerading as virtue.”

How Foot-in-Mouth Pelosi can say that Democrats are not “fear mongers” in the same breath as saying that “Civilization as we know it today would be in jeopardy if the Republicans win the Senate” does illustrate a level of cluelessness on Nancy’s part that is quite impressive.

But then on second thought, maybe Pelosi’s statement was actually positive, because after what Mrs. Pelosi and her Capitol Hill cronies have done to “civilization as we know it, a Republican Senate jeopardizing the current state of Democrat-crafted civilization is truly a hopeful prospect.