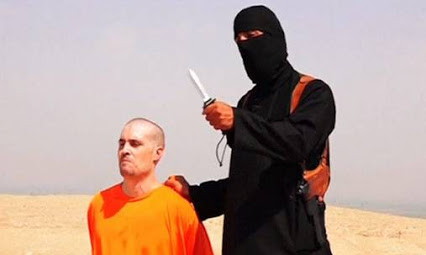 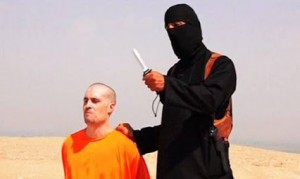 In his primetime speech about going after ISIL (with that damned whistling S), a sibilant Barack Obama promised America that “[w]e will degrade, and ultimately destroy” the band of head-chopping thugs that, with each passing day, is growing larger and stronger.  The problem for America is that the president conveyed the message with significantly less conviction than when he promised us that with ObamaCare we could keep our own doctors.

In addition to the unconvincing delivery, Barack was wearing way too much pancake makeup, and he was positioned below drapes that, from a certain angle, created an optical illusion of the president sporting two horns that would turn Beelzebub green with envy.

In his speech Obama made “two things clear,” which, as usual, were anything but.

The first was that even though the Islamic State of Iraq and the Levant, otherwise known as ISIL, are bitter clingers clinging to armaments and the Quran, according to Obama, they are  “not Islamic,” which is sort of like saying that the Christ in “Christian” has nothing to do with Jesus.

The second, more glaring absurdity was made “clear” when America’s Muslim Apologist clarified for us that “[n]o religion condones the killing of innocents, and the vast majority of ISIS’s victims have been Muslim.”

This is not a surprising statement, coming from a man who believes that there’s a religious “war on women” over abortion but doesn’t believe we’re at war with a group whose faith endorses beheading non-believers.

Either way, religion is loosely defined as a “body of persons adhering to a particular set of beliefs and practices,” which means that a person could be religious about things other than God.

Take liberalism, for instance.  Liberalism’s basic tenets, or “particular set of beliefs and practices,” if you will, center on race-baiting, pushing illegal immigration, harping on “climate change,” and furthering unbridled promiscuity.

Adherents of the religion of liberalism evangelize proselytes to hate the U.S. Constitution, despise capitalism, and fervently revere the holy sacrament of abortion.

As defined, liberalism is a faith to which the president is wholeheartedly devoted.

The fact that high priest Barack Obama, as a central tenet of his religion, condones and even funds abortion serves to discredit the very assertion he made about religion and killing innocents.

Even Joe Biden, who practices the mutually exclusive faiths of Catholicism and liberalism, put a spiritual spin on things recently when he vowed that America “will follow [ISIS] to the gates of hell until they are brought to justice, because hell is where they will reside.”

ISIS believes that killing the innocent gains entry into paradise, and many liberals, despite favoring killing the unborn, eagerly look upward to a future in a heavenly home.

But if Joe thinks that killing the innocent results in the killer going to hell, he should really reconsider his support for the hallowed rite of abortion.

Then there’s the religiously liberal/“practicing and respectful Catholic” Minority Leader Nancy Pelosi, who actually had the gall to say that she considers abortion “sacred ground.”

Meanwhile, although clearly appalled by the beheading of two Americans by a masked murderer with a kitchen knife, if Barack Obama were to go tit-for-tat in a “killing of innocents” competition, liberalism far out-kills ISIS.

With 700 Planned Parenthood churches funded by the government all over America, the dismembering, scalding, and suctioning of 3,000-4,000 innocents a day surely surpasses even ISIS’s busiest day of sadistic barbarism in the name of jihad.

But what Obama’s statement that “[n]o religion condones the killing of innocents” fails to acknowledge is that the fundamental religion he himself follows fanatically spills gallons of innocent blood daily.

Let’s face it – with Islam at its core, ISIS/ISIL hasn’t even come close to the 60 million babies who have been slaughtered here in America on liberalism’s bloody altar, and when it comes to killing in the name of religion, the main difference between ISIS and liberalism is that no one videotapes late-term abortions and proudly broadcasts them worldwide.

Rest assured, if abortions were public spectacles instead of private executions, James Foley’s and Steven Sotloff’s grisly murders would be just two in a daily barrage of religious sacrifices justified by equally committed zealots.

Moreover, Obama’s insistence that “the vast majority of ISIL’s victims have been Muslim” means nothing, especially since his liberal religion champions the rights of minorities while simultaneously destroying those same minorities in high numbers.

According to the CDC’s latest Abortion Surveillance report:

So the president citing Muslims killing other Muslims as evidence that ISIS is not Islamic serves only to further indict himself, because killing the offspring of racial subgroups is what liberals do best.

And which is worse: ISIS killing the enemies of their faith by exterminating the potential seed of Muslims from other sects, or liberals decrying ISIS murdering babies while they themselves terminate hundreds of thousands of future liberals every year?

So once again this president has proven that he knows nothing about a subject that he’s unequivocal about when he’s reading off a teleprompter.

Moreover, despite condemning ISIL, Barack Obama ignores its similarities to the doctrine and practices of his own faith, whose rigidly fundamentalist belief system justifies the killing of many more innocents than ISIS.