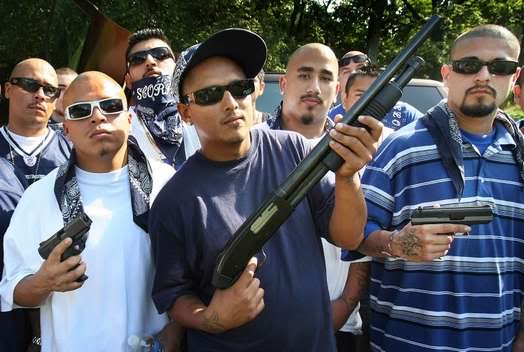 It’s classic Cloward-Piven strategy.  First you foment a crisis, and then you rush in with a left-wing cure.  That is exactly what the president did during an interview on ABC’s This Week with George Stephanopoulos, who is not to be confused with Sesame Street’s Mr. Snuffleupagus.

That’s right – Barack Obama, who, when it comes to himself, regularly contravenes the rules and regulations, is now suddenly an expert on how law enforcement should comport themselves in tense situations.

According to the president, minority community sensitivity is needed for police officers, who Obama has said in the past can “act stupidly.” The president feels the goal should be to teach law enforcement how to differentiate between a gang-banger and an innocent child, who, if wearing a hoodie, could be Obama’s son.

What the president’s counsel did not include was advice on how to deal with gang-bangers wearing hoodies or innocent children foolishly emulating gang-bangers.

… [t]hey want to make sure the police are trained so they can distinguish between a gang banger and a kid who just happens to be wearing a hoodie, but otherwise is a good kid and not doing anything wrong.

The president should be familiar with that type of mix-up. In 2008 and 2012, thanks to his emitting a “new car smell,” candidate Obama benefited because Americans were not trained to distinguish between a qualified candidate and a Chicago community organizer/socialist rabble-rouser who decided being black was the only criterion needed to run for president.

Now, just a few weeks after America expressed views Obama ignored when he lawlessly and unilaterally extended executive amnesty to those who defy the rule of law, he told George Stephanopoulos, “You know, this is a country that allows everybody to express their views. But using any event as an excuse for violence is contrary to rule of law and contrary to who we are.”

It sure would have been nice if George had asked the president, who just the other day said that “[m]ass deportation would be both impossible and contrary to our character,” how the rule of law reflects who we are in some circumstances, but in others, following the rule of law contradicts our character?

After a break, Obama came back to discuss why lawless behavior is acceptable when he deems it necessary. Stephanopoulos asked the president how he justified exercising “administrative flexibility” when he circumvented Congress to grant amnesty to 5,000,000 illegal aliens.

First the president denied being emperor; then he explained that his job is to execute the laws he doesn’t keep, and then applied the gang-banger/hoodie argument to immigration when he told George that America has to:

…[p]rioritize felons, criminals, recent arrivals, folks who are coming right at the border and acknowledge that if somebody’s been here for over 5 years, they may have an American child or a legal permanent resident child[.]

In other words, the president was sort of saying that when it comes to immigration, Americans have to put the law aside and be able to “distinguish between” gang-banging illegal ISIS terrorists, MS-13 gang members, pedophiles, murderers, and rapists and hoodie-wearing unaccompanied minors who just happen to be infected with Enterovirus D-68, but otherwise are good kids and “not doing anything wrong.”

Then, after citing prosecutorial discretion as the reason he did what he erroneously thinks Democrat and Republican presidents have done before with bipartisan Congressional approval, the president went on to give a laundry list of things that we have to do but will never do nor be able to enforce.

Things like securing the border, deporting criminals similar to the ones the Obama administration has already released, and believing that illegals will willingly submit to criminal background checks and U.S. tax law.

Then, point guard Stephanopoulos provided an opportunity for Obama to block any argument that might suggest that his so-called prosecutorial discretion on immigration could open the door for future presidents to target Democrat favorites like abortion and taxes.

According to Barack Obama, it’s different when it comes to taxes because, he says, “The vast majority of folks understand that they need to pay taxes. And when we conduct an audit, for example, we are selecting those folks who are most likely to be cheating.”

Wait! Sneaking over the border isn’t dishonest? And when he says “we,” does he mean himself and Lois Lerner auditing conservatives, Tea Party activists, and right-wing media types?

Either way, apparently for Obama it’s not the same when illegals flagrantly break the law as it is for American citizens whom Obama wants to abuse with Chicago-style intimidation.

Clearly, the president feels his time is better spent “going after” millions and millions of Americans who disagree with him politically than it is pursuing illegals who Obama believes “we’re taking advantage of … as they mow lawns or clean out bedpans.”

When it comes to tax law, Obama, who’s proven to be the lawless one and who doesn’t expect bed-making, fruit-picking, lawn-mowing, bed-pan-emptying illegals to follow the law either, said that although not every person is audited, “we,” (as in he) “still expect that people are going to go ahead and follow the law.”

So there you have it. According to Barack Obama, black teenage boys in hoodies are off-limits to police officers. Similarly, when it comes to illegal aliens, the hoodie test should also be applied, lest those daring to suggest deportation as an option end up being legally audited by a president who doesn’t respect the law.