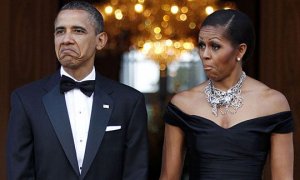 Michelle and Barack Obama recently sat down with Peoplemagazine, the outstanding journalistic publication that gave us the Brittany Maynard: I Moved to Oregon so I Could Kill Myself saga and the poorest selling People cover of the year: Hillary & the White House.

The bigotry issue focuses on the gripes of two angry racists who ignore the fact that they have exploited skin color all the way to the White House. Instead of being grateful, six years into Obama’s second term as president of a country with a white majority, he and Michelle feel now is as good a time as any to discuss their “racist experiences.”

Throughout the interview, Michelle, a woman with less-than-stellar grades who didn’t mind using her skin color as a springboard to an elite institution like Princeton, laughed “wryly”. Failing to mention the very valid reasons why a cab driver on the South Side of Chicago might be hesitant to pick up a young black man, Michelle had this to say:

I think people forget that we’ve lived in the White House for six years. Before that, Barack Obama was a black man that lived on the South Side of Chicago, who had his share of troubles catching cabs.

Maybe Michelle doesn’t know about cab drivers like Edwin Obazuaye. Edwin was a 48-year-old black man who, in March of 2013, picked up Eric Taylor and another passenger in the Auburn Gresham area on the South Side of Chicago. Taylor robbed Edwin and after shooting the taxi drive stole his cell phone. As a result of being shot in the back and suffering a wound to the head, four days later Edwin died.

While Michelle was pointing out to People magazine the injustice of young black men being unable to hail cabs on Chicago’s Southside, the first lady also forgot to mention 17-year-old rapper Clint Massey, aka RondoNumbaNine. In February of this year, Massey was charged with shooting and killing black cab driver, 28-year-old Javan Boyd.

During the gripping interview, the first lady informed People that just because she wears $12K gowns and her husband sits in the most influential seat of power in the world, they are not insulated from racism.

For example, Michelle shared one disturbing incident that took place on her fake relate-to-the-little-people expedition to Target in 2011 which, at the time, seemed more about height and laundry soap than skin color and racism.

However, three years later, after mulling it over a bit, Michelle now sees the Tide Encounter quite differently. The first lady told People:

I tell this story – I mean, even as the first lady – during that wonderfully publicized trip I took to Target, not highly disguised, the only person who came up to me in the store was a woman who asked me to help her take something off a shelf. Because she didn’t see me as the first lady, she saw me as someone who could help her. Those kinds of things happen in life. So it isn’t anything new.

Amazingly, America’s 5’11” first lady, who in 2011 relayed the story to David Letterman as an amusing tale of a short woman unaware she was asking the first lady to help her reach some laundry soap, has now morphed into racism.

Michelle was not alone. Barack, the man who, despite being unable to express himself very well in writing, became president of the Harvard Law Review, and who is presently POTUS despite his razor-thin resume, piped up and said, “There’s no black male my age, who’s a professional, who hasn’t come out of a restaurant and is waiting for their car and somebody didn’t hand them their car keys.”

Besides the fact that there are just as many white valets as there are black valets, one would think Obama would view the get-me-my-car faux pas as a compliment. Distrusting a black valet with one’s car keys would certainly be a more appropriate example of racism than handing over the keys to the Mercedes.

Not only that, but people do make mistakes. After all, wasn’t it Obama who misidentified a Navy corpsman as a “corpse-man?” Doesn’t that even things up?

Not on your life!

Mrs. Obama recalled another unsettling incident when the president was “wearing a tuxedo at a black-tie dinner, and somebody asked him to get coffee.” What Michelle didn’t mention was whether Barry was standing against the wall with his arms crossed whispering to Valerie Jarrett, also in black tie.

In fairness, the Obamas did have the common decency to admit to People that racism in America has gotten better, especially because that waiter/valet is now the president, but not before adding the following qualifier: “The small irritations or indignities that we experience are nothing compared to what a previous generation experienced.”

Then Obama stressed that progress still needs to be made because:

Wait! Does Obama have a son? If not, is the president using the “son” example to imply that out of the approximately seven million black males between the ages of 12 and 30 living in America, attempting to walk with one’s belt mid-thigh and lurking around in a hoodie is the only reason some of these young hooligans are being accused of robbery or worse?

Either way, the Obamas were correct that progress has been made with racism.

Unfortunately, with hypersensitive elites offering highly dubious examples of prejudice and excusing the bad behavior of some black males, the progress is making a U-turn and taking us backwards.

And as a result, just like everything else our first black president has accomplished, with the help of his wife Michelle, Barack Obama has managed to dumb down real racism and trump up the made-up kind.