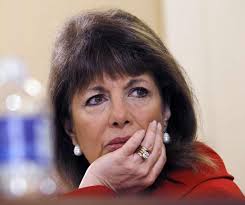 Besides being shot on a fact-finding trip to Jonestown in 1978, Speier is best known for taking to the House floor to chide pro-life legislators by admitting to having an abortion at 17 weeks. Jackie Speier also favors environmentalism, and is pro-gun control and pro-gay marriage.

Despite Roman Catholicism being the religion Speier claims to identify with, much like Nancy Pelosi, in reality their cult-like convictions are firmly embedded in the dutiful creed of liberalism.

Now 64 years old, Speier initially became involved in politics as a congressional staffer to Leo Ryan (D-CA). In November of 1978, when Jackie was twenty-eight, she joined Ryan, then chair of a subcommittee on protecting American citizens abroad, on a fact-finding mission to Guyana to investigate human-rights abuses at Jim Jones’ Peoples Temple.

From the transcript of Jim Jones, The People’s Temple, & The Jonestown Massacre Jackie was quoted as saying:

We got to the commune and it was pretty remarkable. In two years, they had created a very viable community. There were crops growing, there were cabins, there was a pavilion, there was a medical clinic, there was a day care center.

So for all intents and purposes, what Jackie and the team initially witnessed in Jonestown seemed positive and constructive sort of like liberalism. Jonestown had a “charismatic yet paranoid [Marxist] leader…a viable community,” free healthcare, provisions, and childcare.

But sadly, beneath the humane safety net of Jonestown something very sinister lurked.

On the day 900+ people were forced to commit “revolutionary suicide” by drinking cyanide-laced grape Kool-Aid, Ryan’s team was attempting to leave with a group of the cult’s defectors who claimed to be held on the compound against their will. That’s when a band of Peoples Temple members attacked the investigative team, leaving five dead, one of whom was Leo Ryan, who died after being shot in the neck.

Ambushed on the tarmac, Jackie Speier was shot five times at point-blank range but managed to survive after crawling into the cargo bin of a plane. Speier, who lay there for 22 hours waiting for aid to arrive, endured the pain by drinking shots of strong Guyanese rum brought to her by Jonestown survivors who spent the night drinking in a local bar.

Jackie’s harrowing experience in Jonestown is significant, because lately the congresswoman has made some comments that make one wonder how a person who witnessed such intense brainwashing firsthand doesn’t recognize how a similar indoctrination influences her progressive point of view.

When it comes to abortion, gay marriage and the like, it’s obvious Speier regularly knocks back the liberal Kool-Aid. But, after the 6,700-page Select Committee on Intelligence study on the CIA’s detention and interrogation program was released, even Jackie’s House floor admission to having had an abortion pales in comparison to the congresswoman implying to MSNBC host Don Lemon that the CIA should apologize.

Jackie Speier didn’t clarify to whom the Central Intelligence Agency should apologize exactly, but it sure sounded like she was saying that the CIA should apologize to the terrorist group responsible for 9/11.

The appalled congresswoman had this to say about the Senate Committee’s report:

Every single page had something in the executive summary that shocked me. Whether it was the rehydration anally or keeping them sleep deprived for one hundred and eighty hours with their hands over their head in shackles. That is not what this country is about and we have got to shut this down.

Expressing an opinion that is sympathetic to terrorist types is somewhat predictable from a leftist, as is apologizing for America for actions that require no defense.

But then when Lemon, who failed to follow up by asking to whom she felt an apology was owed, asked “Should the agency issue an apology?” Speier quickly replied “Absolutely.”

So here we are, 36 years after Jonestown, and a Roman Catholic congresswoman who, besides shilling for abortion and gay marriage and after being shot five times fleeing The People’s Temple, is now suggesting the CIA apologize for using enhanced interrogation to save American lives.

Sorry to have to break it to Ms. Speier, but regardless of to whom she feels an apology is owed, the potential ramifications of saying “I’m sorry” for actions deemed by our leaders as necessary in this particular case would be like guzzling a cup of cyanide-laced Kool-Aid.

From the transcript of Jim Jones, The People’s Temple, & The Jonestown Massacre, Jackie mentioned the “hair on the back of [her] head stand[ing] up,” when Jonestown is referred to as a mass suicide. According to Speier, nothing about what happened that day was a suicide: “The 900 people that were members of that cult, they were killed, they were murdered, they were massacred.”

Despite that experience, and based on the ridiculous suggestion that the CIA apologize – to anyone at all – what’s clear here is that Ms. Speier has been indulging in some Kool-Aid.

Moreover, it’s the hair on the back of America’s head that should be standing up, because currently there are politicians in positions of power who, like Jackie Speier, have inclinations that, if acted upon, could set America up for another massacre.

Still, Jackie Speier and her ilk seem willfully blind to the similarities between the Jonestown mentality and her party’s submission to lies and deceptions that could lead America into liberal-inflicted suicide.