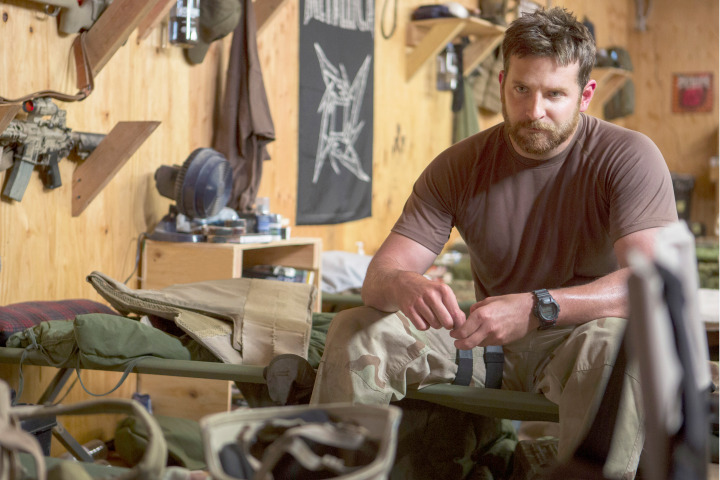 Hollywood is also a place where America-hating, Cuba-loving collectivists can become millionaires while criticizing capitalism, and the pot-smoking offspring of “radical Jewish socialists” can be catapulted to the heights of stardom for telling dirty jokes.

Hollywood is home to those who champion freedom of expression as long as what is being expressed supports the left-wing agenda. Yet those same people refuse to recognize that the right to express those opinions, regardless of how vile, was won thanks to the sacrifices of the men and women of our military.

Now, as American Sniper breaks all box-office records and receives six Oscar nominations, including Bradley Cooper for Best Actor, the usual Hollywood blowhards are expressing disdain for a film chronicling the experiences of the most lethal sniper in American history.

When recounting his role as an assassin, the subject of the Clint Eastwood movie, the late US Navy Seal Chris Kyle, nickname by insurgents “The Devil of Ramadi,” has been quoted as describing the adversary as “Savage, despicable evil.”

Those kinds of adjectives offend liberals because to them America’s enemies are heroes and America’s heroes are enemies.

In fact, based on some of the negative reaction to the movie’s success, it appears that there are those who would have preferred that Eastwood make a movie sympathetic to the Marine Corps veteran with PTSD who shot and killed Kyle and his friend Chad Littlefield at a gun range.

On Twitter, Rogen, who is beloved by the star of Eastwood’s “Empty Chair” series, President Barack Obama, compared the movie American Sniper to the fictional Nazi-sniper propaganda film featured in the plot of Quentin Tarentino’s Inglourious Basterds.

Seems Rogen, who once said “I mean, where I come from, ‘communism’ is not a terrible word,” is bent out of shape because Eastwood has made a hero out of a man who says things like “It was my duty to shoot the enemy, and I don’t regret it. My regrets are for the people I couldn’t save: Marines, soldiers, buddies.”

Similar to the lines wrapping around theaters nationwide, when Chris Kyle was memorialized at Cowboys Stadium in Arlington, Texas, there was a funeral procession stretching over 200 miles from Midlothian, Texas to Texas State Cemetery in Austin.

Sadly, for Seth there are no lines for his movies. Instead, while he’s busy criticizing American Sniper, which grossed $105.3 million in four days, The Interview, the lemon Rogen starred in with James Franco, is predicted to lose $75 million.

Nonetheless, Seth Rogen is not the only paunchy Hollywood type who enjoys the freedoms American sniper Chris Kyle protected. The other bigmouth hefty trying to demean true fearlessness is the corpulent anti-capitalist owner of nine properties and obvious consumer of lots of foie gras, director/producer/writer/author/ multimillionaire Michael Moore.

Michael Moore, a man who has zero clue when it comes to valor, love of country, or heroism, took to Twitter to call Chris Kyle a “coward” who “shoots u in the back.” According to America-hating Moore, “snipers aren’t heroes, and invaders are worse.”

Michael the “Sicko” seems to be morally equating murderers like the DC sniper, who hid in the trunk of a car shooting random people going about their daily business, with the duties of a warrior protecting the lives of other soldiers.

This bunkum comes from a guy who embraces a health system instituted by a Cuban dictator renowned for lining up thousands and mowing them down with firing squads.

Then there’s writer and film critic Lindy West. In an article in the Guardian West, who received a social media award from Hanoi Jane, opines, “The real American Sniper was a hate-filled killer.” Then she asks the question: “Why are simplistic patriots treating him as a hero?”

West wrote of the film, “If [Eastwood], intentionally or not, makes a hero out of Kyle – who, bare minimum, was a racist who took pleasure in dehumanizing and killing brown people – is he responsible for validating racism, murder, and dehumanization?”

If she believes that’s true, then why doesn’t Lindy West admit that those who refuse to acknowledge that the religion responsible for the killing of white, black and brown people and for the raping and beheading of thousands in the name of Allah are also responsible for “validating racism, murder, and dehumanization?”

Rogen, Moore, and West are among those who wouldn’t hesitate to call Kyle an “American Psycho”. Yet that same group would probably refuse to label a Muslim extremist who kills to avenge Mohammed an Islamic terrorist.

This pathetic group of individuals scorns the memory of a dead soldier who, had he been in Libya on September 11th 2012, would have done more to help than a missing president who may have been busy watching a rerun of Rogen’s stoner flick Pineapple Express while four Americans, including an American ambassador, were being murdered.

In the end, the sad truth is that, predictably, liberals would rather support killing an unborn baby than a terrorist. But above all, be they in Hollywood, the media, or academia, liberals can always be counted on to disparage patriotism, censure heroism, and generally condemn anyone who dares to harm America’s enemies.