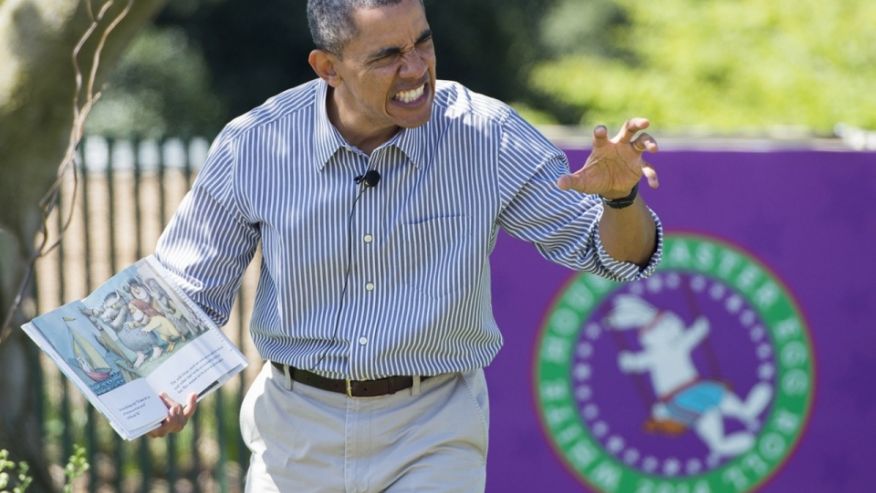 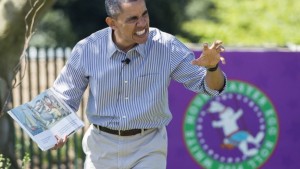 Although it sounds a little like a new product for a couch potato suffering from chronic constipation, Michelle Obama’s ‘Let’s Move!’ initiative is celebrating its 5th anniversary of imposing government regulations on a nation that would rather she focus on something besides food.

To celebrate ‘Let’s Move!’ success, the healthy hashtag #gimmefive was added to this year’s theme for the 137th White House Easter Egg Roll.

Amidst all the excitement, in addition to hardboiled symbols of fertility being rolled around on the lawn of a pro-choice president, the first lady thought it would be appropriate to honor the ‘risen Christ’ by strutting her stuff with the “So You Think You Can Dance” dance troupe in time to a rhythmic rendition of “Uptown Funk.”

Then, in keeping with tradition, despite Harry Reid and Nancy Pelosi being nowhere in sight, Barack Obama took to the Story Corner to read a cautionary tale by Maurice Sendak entitled “Where the Wild Things Are.”

Adhering closely to the tradition of prior years, the president sat down to read to the children. Unfortunately, before Obama could finish the 338-word story, a swarm of bees came in for the kill.

Not for nothing, as they say in Brooklyn, but did you ever notice that the president attracts ‘wild things’ like bugs, rats and, on more than one occasion, buzzard-sized flies?

This time, the same guy who reassured America that “If you like your health care plan, you’ll be able to keep your health care plan” attempted to calm the children dodging the dive-bombing bees with the comforting words, “Oh no, it’s a bee. That’s OK, guys. Bees are good, they won’t land on you. They won’t sting you, they’ll be OK.”

That’s right, while Kenyan Christians massacred by the Somali-based al-Shabab terror group were being buried and Iran restated their commitment to the destruction of Israel as being “non-negotiable,” Barack Obama spent a busy Monday morning quelling the anxiety of children being menaced by bees.

Clearly ignoring the president’s insistence that bees, like ISIS, are just harmless JV team players, the children continued squealing, which inspired the president to kick it up a notch, yelling, “Hold on! Hold on! You guys are wild things! You’re not supposed to be scared of bees when you’re a wild thing!”

If this same group of kids realized that six years earlier the guy telling them not to be afraid of bees was the same person who would have enthusiastically funded the termination of their lives, it wouldn’t be bees the frightened children would have been stampeding to avoid.

Nevertheless, to reinforce the belief that bees notorious for stinging don’t sting, America’s most famous raconteur proved his point with a story about a badly behaved lad who, after being sent to bed without supper, dresses in a wolf costume.

Maybe the president finds “Where the Wild Things Are” inspiring because it reminds him of his own fantastical journey into the make-believe world of “Hope and Change.”

Think of it! Like America, Max’s room “fundamentally transforms” into a jungle. Obama flies on Air Force One and Max sails to an island populated with malicious beasts called Wild Things.

Obama bullies politicians and Max intimidates creatures.  But above all, similar to Barack Obama, Max is eventually acknowledged as the king of Wild Things who, before returning home to his supper, spends all his time cavorting with his subjects.

So that was Easter 2015 at the White House.  Before subjecting the kids to the excruciating sight of Michelle shaking her groove thing to “Uptown Funk” on the holiest of all Christian holidays, Barack Obama reaffirmed his empathetic nature by referring to small children terrified by a swarm of attacking bees as “Wild Things.”