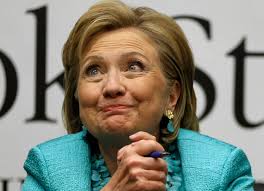 Voilà!  In addition to handling a private/official email problem, flying coach, and carrying her own luggage, Hillary Clinton may now be able to add to her list of outstanding accomplishments singlehandedly resolving the contention surrounding immigration reform.

Recently, on a tightly stage-managed listening tour Hillary, granddaughter of alleged immigrants, revealed her acute sensitivity for the plight of – you guessed it – immigrants.

An empathetic Hillary had this to say about how illegal immigrants are being treated in America:

We are turning down people who really want to work. I mean they are here to work and a lot of them now have children who are American citizens, and they are doing the best they can to try to make a good life for themselves and their families.

And you know, I think if we were to just go around this room, there are a lot of immigrant stories. All my grandparents, you know, came over here and you know my grandfather went to work in [a] lace mill in Scranton, Pennsylvania and worked there until he retired at 65.

Ratcheting up the relatability factor to new heights, the presidential hopeful finished her immigration tale saying:

So I sit here and I think well you’re talking about the second, third generation. That’s me, that’s you. And we are saying to all these other people who want the same dreams and the same aspirations and the willingness to work hard just like our families did that no, we’re not going to make it easy for you, we’re not going to make it legal for you. And I just think that’s such a short term, unfortunate outcome for us [as] well as for them.

Besides the total staging of a fake impromptu gathering, there are a lot of things wrong with what Hillary had to say, the most glaring of which is her exaltation of lawbreakers.

But then again, as we’ve already witnessed, the most famous woman in a pantsuit will say and do just about anything to get elected. In Hillary’s world the ends always justify whatever sordid means are necessary to accomplish her goal to finally seize and maintain power.

In this case, besides encouraging criminal behavior Hillary prevaricated about “All [her] grandparents, you know, [coming] over here.” Unfortunately, based on easily-accessible public census records, as it turns out Sir Edmund Hillary’s pseudo-namesake’s soaring tale of settlers’ struggle and courage is yet another in a long list of self-serving lies.

It’s either that, or Clinton can’t keep track of her emails or remember where her maternal and paternal grandparents were born, in which case, for the sake of the country she seeks to lead, maybe she should reconsider trying to gain control of the nuclear launch codes.

That’s not likely to happen, so instead, added to a roster that already includes a fake marriage, a fake laugh, a fake love for “everyday people,” a fake listening tour, and fake stories about Bosnia, Benghazi, Bill and all manner of other baloney, Hillary must have felt it was as good a time as any to add fake immigrant grandparents.

For those of us who prefer the truth, Hillary Clinton’s ongoing lies are infuriating, and her attempt to dumb-down legal immigration is downright offensive. The truth is that Clinton’s sole foreign-born grandparent, Hugh Rodham Sr., migrated to Pennsylvania from Northumberland, England in the late 1800s.

From the perspective of being the grandchild of genuine immigrants, three of whom emigrated legally from Italy in the early 1900s, Hillary, who diminishes everything from the sanctity of life to the murder of four Americans in Libya, denigrates lawful entry into the U.S. as well as the hard work and character that most legal immigrants are known for.

Nonetheless, after the truth about Mrs. Clinton’s ancestral heritage was revealed, one of her lapdogs explained her brazen lie like this: “[Hillary’s] grandparents always spoke about the immigrant experience and, as a result she has always thought of them as immigrants.”

And my grandparents always spoke about music, and as a result I’ve always thought of them as musicians.  Even though none of them ever picked up a musical instrument and couldn’t play a note if their life depended on it.

“As has been correctly pointed out, while her grandfather was an immigrant, it appears that Hillary’s grandmother was born shortly after her parents and siblings arrived in the U.S. in the early 1880s.”

If that explanation sets the new standard, then being born in the U.S. now defines an immigrant, especially if the birth takes place shortly after one’s parents arrive here – which, ironically, totally disqualifies every anchor baby from claiming U.S. citizenship.

Furthermore, besides her foreign-born grandfather and the grandmother who was born soon after her parents came to America, Hillary has two other U.S.-born grandparents whom she also identified as immigrants. That means that in her own uniquely mendacious way, Hillary Clinton may have settled the whole controversy surrounding immigration by classifying everyone, whether foreign- or American-born, as immigrants.

In fact, Hillary’s definition is rife with possibility because it does away with the legal/illegal distinction and “levels the playing field” for anyone living in America.

In other words, in Hillary’s mind, if you’re born in or out of the U.S., you, like her three American-born grandparents, are now considered an immigrant, which means that thanks to the genius logic of the smartest woman in the world, all are immigrants!

That is unless, despite what the census data and other records say, like Barack Obama’s dubious beginnings, Hillary’s maternal and paternal grandparents were really all foreign-born. If so, America might as well just believe Hillary citing her foreign family’s origins, because like everything else, the definitive evidence is probably forever hidden away on her private email server.