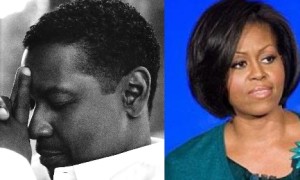 Originally posted at the CLASH Daily.

A hugely successful black male celebrity had a word of advice for those who would otherwise be influenced by racially-obsessed firebrands like Al Sharpton, Mr. and Mrs. “Poor Me” Obama, as well as the lead prosecutor and social justice-minded mayor of Baltimore.

According to this particular African-American superstar, the key to success isn’t forcing equality, killing cops, being a beneficiary of quotas, or political retribution – it is putting God first.

In Alabama at the Tuskegee University commencement an ungrateful spoiled brat named Michelle Obama spewed forth a dose of racial venom that would put Minister Farrakhan to shame.
Meanwhile, at Louisiana’s Dillard University, Academy Award-winning star of such films as Malcolm X, Training Day, Glory, The Book of Eli, and The Equalizer, Denzel Washington, took a vastly different approach to being a keynote speaker.

Denzel assumed an attitude of thankfulness and humility by telling graduates that if one “puts God first,” success will follow. Washington didn’t talk about bias, prejudice, “uppity-ism,” or “cronies of color.” Instead, Denzel Washington chose to discuss how everything he’s accomplished is due solely to the “grace of God.”

While the first African-American first lady was busy recounting for Tuskegee grads every personal affront she could dredge or dream up, African-American megastar Denzel promised, “I’m going to keep it short.” Then, after receiving an honorary doctorate of Humane Letters at the ceremony, he told the group to “Put God first in everything you do.”

Michelle Obama’s Tuskegee comments exuded an attitude of racial entitlement mixed with palpable resentment, but not Denzel’s. Instead, he shared how his mother rebuked her son’s growing haughty desire to climb his way to the top of superstardom without leaning on God.

Instead of sounding off on racial prejudice like an angry street agitator, which is what Michelle Obama was busy doing in Alabama, Denzel told the following story:

“When I was young and started really making it as an actor, I came and talked to my mother and said, ‘Mom, did you think this was going to happen? I’d be so big and I’ll be able to take care of everybody and I can do this and I can do that.’ “

“Oh, you did it all by yourself? I’ll tell you what you can do by yourself: Go outside and get a mop and bucket and clean these windows – you can do that by yourself, superstar.

Instead of blaming perceived wrongs for what he didn’t have or what wasn’t bestowed on him because of his skin color, Washington acknowledged those in the audience like his mother who sacrificed much so that the graduates could accomplish their academic goals:

“So, I’m saying that because I want to congratulate all the parents and friends and family and aunties and uncles and grandmother and grandfathers, all the people that helped you get to where you are today.”

Washington reminded the crowd of something Michelle Obama, with all her fancy clothes, gourmet food, and bad attitude doesn’t seem to grasp, which is that no matter how many personal assistants, multimillion dollar vacations, or pairs of Jimmy Choo shoes one owns, “You will never see a U-Haul behind a hearse.”

Unlike Mrs. Obama’s Tuskegee tirade, the Denzel-delivered Dillard commencement speech had none of the bitterness, animosity, or warnings about the impending hardships of being black in America that were so prominent in Michelle Obama’s remarks.

Instead, Denzel Washington told the graduates:

And so, if some disgruntled black Americans are looking for an alternative example of how success is attained, maybe instead of firebombing minority-owned businesses, shooting young police officers in the head, or buying into Michelle Obama’s Tuskegee vitriol, how about listening to Denzel’s sound advice and “put God first?”