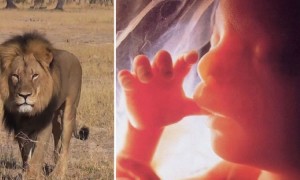 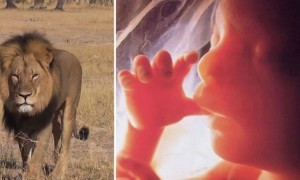 Call me hardhearted, but unlike late-night talk show host Jimmy Kimmel, who got choked-up talking about how Minnesota dentist Walter Palmer killed Zimbabwe’s beloved 13-year-old Cecil the Lion, when I weep, it’s for the 60 million human beings that have legally perished in a natural habitat called the mother’s womb.

Am I missing something here? Because in the moral outrage department something is sorely amiss.

Not that hunting lions is my thing, but here I was just getting used to the morally relativistic idea that there is no right and wrong and then, out of the blue, I find out that although killing babies is an acceptable choice, killing lions is not.

I thought it was the left’s modus operandi to measure every action against a personal moral compass. If it’s right to you, then it’s right – right? Wrong! Thanks to Cecil we’ve come to find out that there is no right and wrong – unless you shoot a lion. Then ethical relativists suddenly transform into self-righteous moralizers.

Actually, as harsh as it may sound, I’m kind of glad the lion issue happened at the same time the Center for Medical Progress/Planned Parenthood baby body-parts videos are being released. It’s very revealing what captures America’s attention.

Here we have Planned Parenthood president Cecile Richards, heading up an organization that hunts down marketable livers in the womb, and she gets kudos from Barack Obama for doing so. Meanwhile, a sportsman travels to South Africa to hunt, then unintentionally kills Cecil the Lion and People for the Ethical Treatment of Animals (PETA) call for Palmer to be “extradited, charged, and, preferably, hanged.”

Kill an unborn baby and get funding from the government. Kill a lion and you’re drawn and quartered by the ethical-treatment bunch.

ISIS beheads Christians and plows piles of bodies into unmarked graves and no one gives a damn, but Cecil is decapitated and the hunter becomes the hunted. Come to think of it, more tears have been shed for a dead lion than were shed for Kate Steinle, the woman shot in the back by an illegal felon in a sanctuary city. Then there was the indifference exhibited by Barack Obama, line dancing in Kenya after five unarmed American soldiers were gunned down in a terrorist attack on America’s homeland.

All of this is not surprising, because if I remember correctly the Lion of the Tribe of Judah was nailed to a tree and the lion’s share of the crowd that called for His crucifixion cheered.

Still, I don’t get why Palmer is getting death threats for killing a well-protected animal while currently 4,000, count ’em, 4,000 baby humans are aborted daily.

As far as well-protected environments go, isn’t a mother’s womb supposed to be a protected environment? And if it is, then why do incinerators turn thousands of aborted human beings into ash while the outraged fuss over one dead lion? Maybe it’s because America has been ‘fundamentally transformed’ into a nation where hunting for sport is a no-no, but killing for convenience is a yes-yes.

Sadly, based on the reaction to Cecil’s untimely demise, America is now a place where a dead lion equals hysterical weeping and gnashing of teeth while dead baby parts tagged for sale on a cold stainless-steel tray results in a corporate shoulder shrug.

The dilemma is that as a society we’ve successfully devalued life in the womb. Unfortunately for poor dead Cecil, when one life loses value all lives lose value as well, even a lion’s.

The hunter/dentist isn’t to blame; our culture is to blame because we’ve indoctrinated almost two generations to believe that having a choice trumps the sanctity of life. Now a guy who likes to hunt for sport exercises his right to choose to stalk prey, takes out that prey, and those who ordinarily justify child sacrifice being peddled as women’s healthcare get all apoplectic.

If 60 million living human beings can be legally scalded, scalpeled, and suctioned from the protected environment of the womb, maybe Walter Palmer was under the impression that shooting a lion with a bow and arrow, if he chose to do so, was not a big deal.

Moreover, how is Walter’s quest for personal fulfillment different than a woman seeking a convenience-driven abortion? Both are selfish desires that are satiated by the death of an unsuspecting victim.

Unlike the non-reaction to babies being extricated from the womb in a “less crunchy” manner in order to finance Lamborghinis, the reaction to the dead lion was best witnessed on the CBS show The Talk where host Sharon Osborne’s sentiments bordered on histrionic.

Mrs. O said that as punishment for the dentist hunting and killing “magnificent animals” he should go bankrupt and lose his dental practice. Host Sara Gilbert responded to Sharon’s outrage by waxing philosophical, opining that cows lose their lives every day, and from a cow’s point of view a cow’s life is no less important than the life of a lion.

And while righteous indignation over Cecil becoming a wall trophy rages on, today in abortion clinics all across America, living human babies will be viciously yanked from the womb and discarded like pieces of garbage.