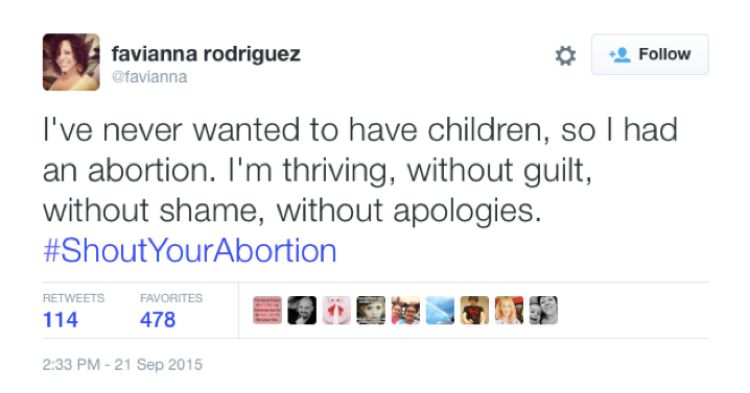 Gloria Steinem bragged on a T-shirt that 40-something years ago she had an abortion. As the end of Gloria’s pathetic life fast approaches, the feminist icon wants it made known that the killing of a child is a reason to rejoice. So too do the thousands of like-minded women who are currently taking to Twitter using the braggadocious albeit barfacious hashtag #ShoutYourAbortion.

The goal of the #ShoutYourAbortion Twitter campaign is to offset the disgrace of submitting your offspring to a horrific procedure wherein mothers dispose of their children in order to further their careers or to shirk personal responsibility.

If doing away with stigma and shame is the goal, why not a hashtag for pedophiles called #ShoutYourChildSexPartner? What about aged Nazi war criminals carrying around all that remorse? Don’t they deserve a freeing #ShoutYourMillionthGasChamberVictim?

Let’s not forget felonious illegals – they at least deserve a #ShoutMyMurderVictim. And as for the proponents of honor killings and female genital maiming, shouldn’t they at least be given equal time with a #ShoutMyMutilatedDaughter hashtag?

Placing genocide and pedophilia aside for a moment, the ‘I’m proud I slaughtered my baby’ campaign was started by an unholy trinity of abortion fans named Lindy West, Amelia Bonow and Kimberly Morrison. The trio is responding to the US House of Representatives voting to remove federal funding for Planned Parenthood, employees of which have recently been caught on video bartering the body parts of sometimes still-living babies that they butcher for profit.

If Lindy, Amelia and Kimberly want to put Planned Parenthood in a better light, maybe they should contemplate starting another abortion pride hashtag, only this time one that celebrates the sale of aborted baby livers. Then, after the ladies are finished heralding the merits of selling human flesh, maybe they can blow off some steam drowning a litter of puppies.In the meantime, to protest the vote to defund the federally-funded abortion mill, since last week the mothers of 60K dead babies have “shouted” their pride for participating in the government-sanctioned filicide currently responsible for the deaths of 60 million babies since Roe v. Wade was voted into law.

Amelia Bonow, one of the creators of the #ShoutYourAbortion hashtag, said she first posted on Facebook about her experience of receiving an abortion “on a whim”, but also in order to “vocally align [her]self with Planned Parenthood.”

So Bonow, who views posting about slaughtering her unborn child “a whim” feels that in addition to aligning her uterus and vagina with forceps and a scalpel, she should also align her voice on Twitter with Planned Parenthood.

What’s interesting about Amelia is a Facebook profile tagline she had posted that has since been removed which read: “Entry Level at Not getting injured or caught,” which means self-preservationist Amelia doesn’t mind fatally injuring the defenseless, but is careful about not getting injured herself.

Either way, for almost a week now the abortion shouters have been shouting about vocations being fulfilled, freedom from unplanned motherhood, and expressing “gratitude” over having living human beings flushed from their wombs mostly for matters of convenience, which on Twitter is currently something to wear as a badge of honor.

Even if a person is filling red biohazard bags with the bodies of dead babies, according to those looking to alleviate an aching conscience, no one needs to be stigmatized or shamed. So rather than admit that what they did was wrong, the #ShoutYourBabyKilling crew is desperately trying to minimize the act of disposing of human life

That’s why, by shouting about one abomination or another, Lindy, Amelia and Kimberly may be trying to free women of the gnawing guilt that no one, regardless of how vile or selfish an act, should have to endure. Moreover, if shouting out this or that assists in helping the shouter believe that the unconscionable is actually something to be proud of, why not encourage everyone to shout?With that in mind, maybe the pro-abortion contingency can really illustrate their acceptance of personal choice by merging with another equally militant group who also feels justified in exercising the right to dispense of inconvenient human beings: ISIS.

How about an ISIS hashtag of #ShoutYourBeheading? Or perhaps #ShoutYourImmolation?

And even if one day Lindy, Amelia and Kimberly find themselves being drowned alive in an ISIS-provided cage, if a simple hashtag elevates the murder of infidels in the eyes of the world, then the #ShoutYourAbortion crowd should be the first to applaud an equally proud #ShoutYourISIS effort.