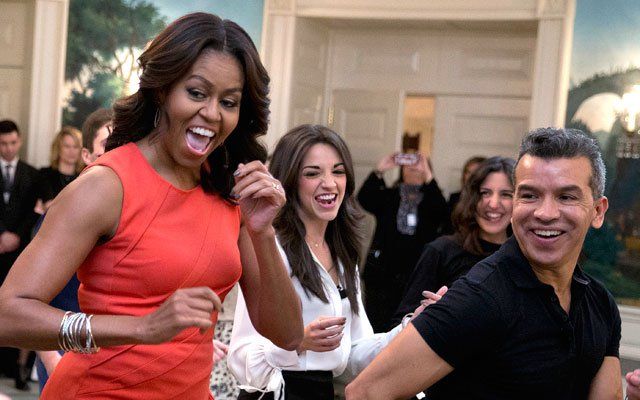 The young people who went to Paris’s La Bataclan concert hall last week went to party and dance. The problem is that 89 of those that jammed into the Eagles of Death Metal concert ended up dead or missing.

A mere 72 hours later, in a stunning display of tactlessness and lack of decorum, at a White House hosted Broadway workshop Michelle Obama danced. Tearing up the carpet in the East Room, the FLOTUS danced the Conga with the same enthusiasm she exhibited when boogieing to the “Uptown Funk” and churning out Bollywood moves on Diwali.

Casting ‘Paris attack’ sackcloth and ashes aside, Michelle invited 40 performing arts high school students to a festive event entitled “Broadway” at the White House, which will air on TLC on November 26.

From the Broadway show based on the story of her and her husband Emilio’s life, Estefan sang “On Your Feet!” and “Glee”’s Matt Morrison belted out a number from Finding Neverland.

Meanwhile, in France, bouquets were being piled high where three days prior bloody bodies fell dead. Yet at the same time at the White House students were treated to rousing Broadway-style acts from shows like: Fun Home, An American in Paris, School of Rock, and Something Rotten.

Speaking of ‘something rotten,’ while 128 victims of ISIS were being identified by family, autopsied, prepared for burial, and tearfully eulogized, America’s empathetic First Lady chose to mark the occasion with an afternoon of acting, directing, singing, costume design, makeup, and music composition workshops.

Then, rather than exhibiting the dignity called for at such a sober time, in the midst of ISIS threatening to taste American blood, Michelle Obama took Gloria Estefan’s advice, got up on her size 11.5 feet and danced the Conga with choreographer Sergio Trujillo and actress/singer Ana Villafana. “There you go with a shimmy!” choreographer Sergio Trujillo teased the First Lady.

Rather than honor France’s dead and inspire youth to understand the pressing issue of worldwide terrorism, Michelle ‘it’s all about you’ Obama told the performing artist wannabes: “These folks are here today to honor you and to hopefully inspire you.”

Mrs. Obama encouraged the schoolchildren by telling them; “They’re also here with an important message for you about what it takes to succeed, not just on Broadway, but in life.”

It would have been more sincere if Michelle had warned the kiddies that because of her husband’s irresponsible policies, attaining success in America, on Broadway, or anywhere else on the planet, seems highly unlikely.

Moreover, shouldn’t the First Lady have also pointed out that if Barack Obama continues to ‘fundamentally transform’ America by accepting military-aged male ISIS fighters disguised as refugees into our nation it’s highly doubtful, despite their “passion and creativity,” that Broadway at the White House-attendees will have a shot at any kind of life at all?

Instead, Michelle, the woman whose husband Obama once called the U.S. Constitution “a deeply flawed document” chose to depict Broadway as a “cornerstone” of American heritage.

FLOTUS said, “Since America is such a big, bold, beautiful nation, that’s how our stories are told on Broadway.” Furthermore, in an effort to advance academic excellence, the one woman Conga machine schooled the young learners by saying that in addition to entertaining and inspiring us, and in lieu of a public school system that teaches unrevised American history, it’s Broadway that “educates” us.

Then, in commemoration of the 128 people mercilessly slaughtered in the heart of Paris, Mrs. Obama cited her husband’s comments about the tragedy by telling her audience this:

As my husband said on Friday, this was an attack not just on France, our dear friend and ally, but on all of humanity and our shared values. And as we mourn, we know that we must continue to show the strength of those values and hopes that the President spoke about when he talked.

Pressing on, FLOTUS flattered her audience by stressing that “the beauty is that all of you here, our young people that are here, you all reflect that passion, that creativity. You all are a part of those values that the President talked about.”

“That’s what we’re protecting,” she said.

And even though thanks to Barack Obama’s reckless attitude toward homeland security, Americans are finding themselves more insecure than ever, according to his wife, “We’re protecting what you all represent.”

And so, after ISIS’s dance of death in France, and judging from her lackadaisical party attitude, it appears as if the values Michelle wants protected includes her right to dance the Conga while the world grieves a terrorist attack.