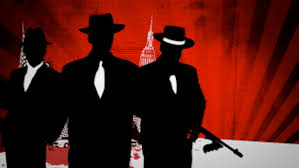 The Cosa Nostra has an unwritten code of conduct that shuns the slaughter of innocent people.  That’s why, in lieu of a sane politician to place the security of Americans before the absurdity of political correctness, it’s no surprise that the Mafia has offered to undertake the role of ridding the Big Apple of ISIS.

Giovanni Gambino, the son of a key member in New York’s notorious Gambino crime family, has proposed that the mafia, who he says is in a much better position than the FBI or Homeland Security to gather street-level human intelligence, is more than willing to provide New Yorkers with the kind of “safe and squeaky clean” protection the late Mafia boss John Gotti’s neighborhood of Ozone Park enjoyed during his reign.

So word to the wise: if ISIS warriors would rather not wake up with a pig’s head in their bed, have hellfire visited upon them, be dismembered in a pork sausage factory, or prematurely meet 72 virgins after being dipped in a vat of boiling bacon grease, maybe the bloodthirsty should pick another neighborhood to carry out the commands of the Quran.

And in case ISIS is willing to gamble, there’s a track record both here and abroad to prove that unlike Barack Obama, if ISIS dares crosses the “red line,” the family will not hesitate to follow through on their word.

Taking that into consideration, in a city that overlooks the capital of Sicily, ISIS’s made men have decided that because of the threat of Mafia retaliation, the mountainous region of Palermo may not the best place to wage terrorist attacks or establish underground cells.

An Italian security official disclosed that out of fear of being eradicated by mob bosses, ISIS cells are afraid to enter certain areas such as “Sicily, Calabria, Puglia and Campania – including the city of Naples.”

According to the security officer, “Italy is able to protect itself from terrorist attacks in just two ways – the precise processing of ‘weak signals’ that allows wiretapping and targeted preventive interventions, and with the Mafia.”

A little closer to home, Gambino reminded the wary that “[t]he world is dangerous today” and reassured “people living in New York neighborhoods with Sicilian connections [that they] should feel safe.”  Rest assured Giovanni means it when he says, “We make sure our friends and families are protected from extremists and terrorists, especially the brutal, psychopathic organization that calls itself the Islamic State.”

Speaking of “brutal, psychopathic organizations,” in truth, the Mafia is just a more effective facsimile of the U.S. federal government.  Both entities extort money with the promise of protection.  The difference is that the Mafia is an organization that actually delivers on the promise.

On the other hand, after using intimidation and threats to extract taxes from hardworking Americans rather than shield from harm, the Washington cartel seems committed to shoving us into the crosshairs of Muslim extremism.  Instead of assuring Americans that ISIS will soon be sleeping with the fishes, Obama is pressuring America to sleep with the enemy.

Worse yet, the forthcoming hit on America’s citizens is being facilitated by the Don who belongs in the Big House but sits in the White House – which is why, when it comes to national security, a crime family spokesperson now seems more trustworthy than the president of the United States.

And as shocking as the proposal to have the Mafia defend the streets of New York City may be to some, for others it makes perfect sense.  Why?  Because, regrettably, Big Apple residents are currently saddled with a mayor committed to playing down the threat of a group of jihadis obsessed with jugulars.

Then again, lest we forget, Bill de Blasio is the guy who believes that a “smack-down” is a post-election line dance.

Moreover, it was during the January 2014 snowstorm that this same de Blasio was more interested in proving a point by making the Upper East Side of Manhattan wait for snow plows than he is about heading off an impending ISIS bloodbath.

So now, in response to that sort of indifference, the Mafia is offering to do job American leaders simply refuse to do.  That’s why, notwithstanding the mob’s sometimes “bad and ugly” reputation, it’s comforting to hear Giovanni Gambino say that “the rise of global terrorism gives the mafia a chance to show its good side.”