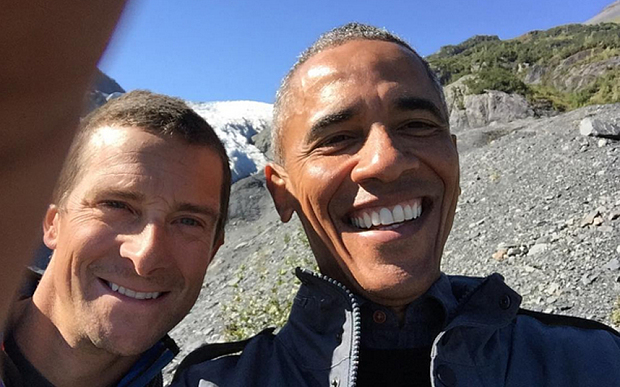 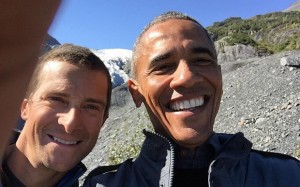 Recently, a friend recommended I tune into NBC’s “Running Wild with Bear Grylls”. Seems that instead of “running wild” in Washington DC, Barack Obama, on a climate change junket North, spent a carefully-scripted afternoon “running wild” (if you want to call it that) in Alaska’s Kenai Fiords National Park with extreme survivalist, Bear Grylls.

Bear’s welcoming demeanor gave Barack the opportunity to learn about using belly button lint to kindle a fire, and how to eat food cooked on a piece of slate.

Grateful to be included in the “running wild” episode, the president got so excited, he lost his head and admitted he lives in a “bubble,” which confirmed the general consensus that he’s out-of-touch.

Obama also confessed that he does not have, and cannot operate a Smartphone, after which he tried and failed to take a selfie.

With that in mind, maybe one of Obama’s advisors should inform the president that claiming to possess the power to slow the rising sea while being unable to operate a Smartphone, could tend to cause a person to lose credibility.

Anyhow, while he was in Alaska, Bear and Barack did talk about angry grizzlies. In fact, that segment is where Obama divulged that Michelle, who he said prefers nice sheets to being outdoors, looks scary look when she gets mad.

The male bonding included discussion about the dangers of disturbing fornicating bears, which may explain why Obama avoids tangling with Vladimir Putin. Then, before swigging out of a canteen, Obama actually chatted about the downside of drinking ones own urine.

After Bear brewed gas-suppressing catkin tea for the president, Obama informed the world that flatulence is not a problem he struggles with. What would have made for great TV is if Bear Grylls had thought to confirm or debunk the “snore-y…stinky” president’s gas assertion with Michelle, and then double-checked whatever Michelle told him with the pilot of Marine One.

Father of three, Bear Grylls asked the president about juggling the presidency and raising two young girls. Obama said that “living over the store” makes it easier for him to spend time with Sasha and Malia, and might explain why the Prime Minister of Israel, Bibi Netanyahu, was once left sitting alone in the White House meeting room while Dad rushed upstairs for dinner.

The usually politically correct president got so caught up in the moment, he blurted out that a “cracker” would have made the half-eaten wild salmon that Grylls said still “smelled of bear breath” more palatable.

The president rambled on a bit about the cold water from a melting glacier, extolled the merits of “persistence,” bragged about being “ripped,” and reminisced about growing up the Hawaiian-born son of a single mother.

Then, after rustling up some of Sasha’s favorite s’mores for Grylls, who seemed less than impressed with Obama’s culinary skills, nouveau survivalist, Obama crowed to Bear that he’s “skinny but tougher than [he] looks.”

In the end, Barry did seem to appreciate the experience of spending time in Seward, Alaska.

But for those of us who assign a mere man more credit than he deserves, watching the president awkwardly ramble about in the great outdoors, devoid of the trappings of power, and bereft of the podium he’s usually hiding behind, was eye-opening.

Lest we forget, it was “fundamental transformer” who made the world believe that he had the power to heal the planet, but based on his obsession with recruiting the world to address global warming, Obama proves the powers he publicized simply do not exist.

In fairness, Obama did bow his head as Grylls prayed a prayer at the end of the show. In the prayer, Bear Grylls asked the “Lord to … forgive us when we fall short and help us to be strong in You”, to which the president responded: “Amen.”

Still, seeing the president standing in the shadow of the Exit Glacier, which formed during the Little Ice Age, “fundamentally transformed”, at least in my mind, a man who regularly reeks of pompousness into somebody finite and frail.

The sight of God’s creation in Alaska made prominent the power of the One who spoke into being the planet, Obama, a withering blade of grass, believes he has the power save.

So, in addition to finding out that belly button lint makes an excellent kindling tool, watching Obama “run wild” with Bear Grylls reminded me that God and God alone is the one with the power – not Barack Obama.