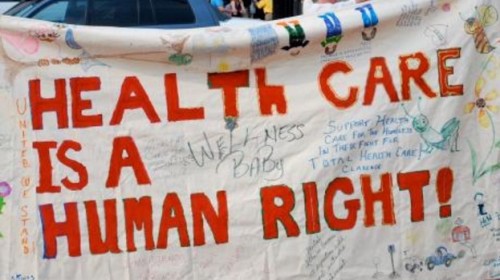 Recently, an elderly relative had a routine procedure to screen for colon cancer. This particular relative is an active, healthy, vital 82-year-old that still works. Unfortunately, there is a family history of colon cancer, which, for prevention, requires bi-annual screening.

This time, after the anesthesia wore off, the doctor was quick to inform her that, based on age, and despite a precarious looking growth being removed, this colonoscopy was her last. The procedure would no longer be covered nor would it be recommended.

Does this now mean that in America age now disqualifies some people from being eligible to locate pre-cancerous growths before they have a chance to turn into full-blown cancer?

The doctors reasoned that older people don’t handle chemotherapy very well. Therefore, even if malignancy were found, nothing would be done about it anyway – so why even bother to look for it?

In other words, for lack of any other fatal disease, why not embolden colon cancer cells to run wild in the lower intestines of old geezers?

The conversation between my family member and the doctor brought to mind the 2010 town hall meeting where a woman named Jane Sturm asked President Obama if he had been in charge five years prior would he have allowed her 105-year-old mother, who received a pacemaker when she was 100-years-old, to receive similar care based on zest for life?

Or would he have cut off care based on age?

Imagine, instead of healthcare decisions being a personal choice, Americans are asking a pro-choice president whether he would choose to allow an old woman who wants to live to receive treatment?

Obama, who had a virtual colonoscopy he’d deny to a WWII veteran, had an “end of life” answer for Jane Sturm. In order to cut down on waste and expense, Obama would have denied surgery, and instead of a pacemaker, would have granted “Granny Sturm a pain pill”.

Six years after that town hall meeting and my elderly relative is being told that at a certain age individuals will not only be denied the right to have cancer treatment, they’ll also be denied screening for cancer prevention.

With that in mind, as a nation, Americans are at a serious juncture.

Maybe someone should tell those meting out cancer screening approvals that being dead is unhealthy.

As for the living; our problem is that the right-to-healthcare party is deciding who has the right to healthcare, which ultimately puts those that argue there is no right to life in the position of determining who lives and who dies.