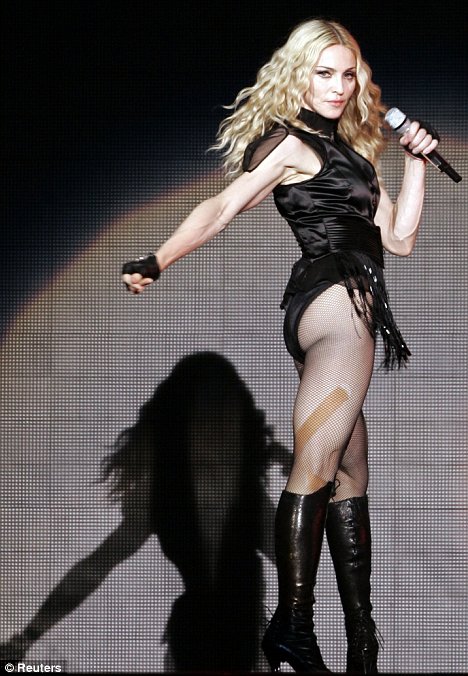 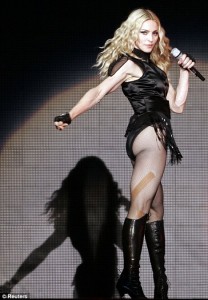 Anyone who does not believe in the Biblical principle of “sowing and reaping” – which is known as ‘karma’ in certain circles – should have a chat with aging 1980s pop icon Madonna.

It seems the Diva of Debauchery is reaping the harvest of heartache that she has so diligently sown for almost thirty years.  Ms. Ciccone has negatively etched vulgar lyrics and images into the impressionable minds of children; purposely tainted the innocent; and, like a parasite, burrowed into the psyche and spirit of an entire generation.

It was Madonna who spent the greater part of the 1980s, and most of the ’90s, expressing her sexuality at the expense of America’s children.  When not parading around naked in pornographic picture books, Madonna Louise Ciccone defiled young minds by blaspheming via Christian symbols and extolling the merits of losing one’s virginity.

As we all know, “what goes around comes around,” so it should be no surprise that the female exhibitionist who robbed millions of their innocence is currently being bitten by a very different, but equally painful, kind of karma.

A little background: In 1986, Madonna married actor Sean Penn, and then she divorced him in 1989.  Since then, every five years or so, Madonna assumes a new identity.

In the 1990s, Madonna went through a Hispanic spell.  That was when she morphed into Eva Perón, mated with a Cuban actor Carlos León, and gave birth to his now 19-year-old daughter Lourdes.

Soon after, Madonna abandoned her Evita image and became enamored with English accents.

In 2000, she married Guy Ritchie, an English filmmaker ten years her junior with whom she had a male child she named Rocco.  Madonna relocated to London, where she refurbished her persona from sleazy pop star to a lady of the English manor.  She became best friends with one-time Londoner, who also play-acts being British, Gwyneth Paltrow; feasted on haggis; wore riding chaps around the house; and wrote British-themed children’s books.

When Madonna’s marriage to Guy Ritchie fell apart in 2008, the “English Roses” author returned to New York City with her children, Lourdes, Rocco, and David Banda Mwale Ciccone Ritchie, the first of two children she adopted during her Malawi phase.

Before long, and instead of aging gracefully, the self-absorbed attention-seeker resumed begging for validation and, in the process, forgot that she’s a mother.

Here’s where the karma comes in.

Trying to shield her own children from what she subjected a generation to in the 1980s and ’90s, Madge banned from her home magazines, television, and picture books featuring nude women hitchhiking.

The problem for Madonna’s brood is that mom just can’t control her impulses – she is still Madonna.

For example, in 2015, she showed up at the Grammy Award Show with her exposed derrière covered in fishnet held up in a Givenchy couture butt bra.  Then, at the Brit Awards, while trying to assume the image of a Spanish matador, the former English lady tripped over her cape and took a tumble on stage.

Meanwhile, Ma-Donna repeatedly embarrassed her 15-year-old son with topless pictures of herself and humiliated her teenage daughter Lourdes by insisting on exposing her behind at red carpet events like the Vanity Fair Oscar party.   Moreover, the word is out that Menopausal Madge’s refusal to tone down the explicit actions and lyrics continually “horrifies” her teenage children.

Then, in a shameful example of an unquenchable pursuit of attention at a child’s expense, Ma-Donna mocked her son Rocco on Instagram.  First she posted a picture of the boy with his hair in pigtails, and then she called attention to the size of his penis.

In response, Rocco made a radical choice that millions of children mesmerized by Madonna’s three-decade long antics were deprived of.  In the middle of a tour she dragged her son around on, “Old Granny’s” “trophy” boy packed his bags and went to live in London with his father Guy.

Ironic, isn’t it?  Rocco does not want to be subjected to continued embarrassment or abuse, so the woman who brainwashed, and continues to try to brainwash, young people accuses Guy Ritchie of trying to brainwash the boy.

The upshot to this fiasco is that Madonna is now embroiled in a custody battle in London’s High Court.  The woman who debauched millions of children claims that son Rocco, now living a happy, “stable life” in England with Guy Ritchie and his wife Jacqui Ainsley, has been illegally retained by his father.

Madonna’s lawyer, Eleanor Alter, argues on her client’s behalf that Guy choosing not to return Rocco to the loving arms of his lascivious mother was a “reckless move in teaching him responsibility.”  After all, everyone knows that the epitome of teaching children responsibility is when a 56-year-old mother of four is so desperate for attention that she exposes her breasts and implies that her son has #nosausage.

So, in the end, what is the moral of Madonna’s “sowing and reaping” tale of woe?

Madonna will likely lose custody of a son who moved to another country to get as far away from her as possible and refuses to come home.  And so, as the woman who for 30-plus years has influenced millions of children to rebel and disregarded the wishes of their parents loses control of her own child, one can’t help but wonder if Madonna likes how it feels.