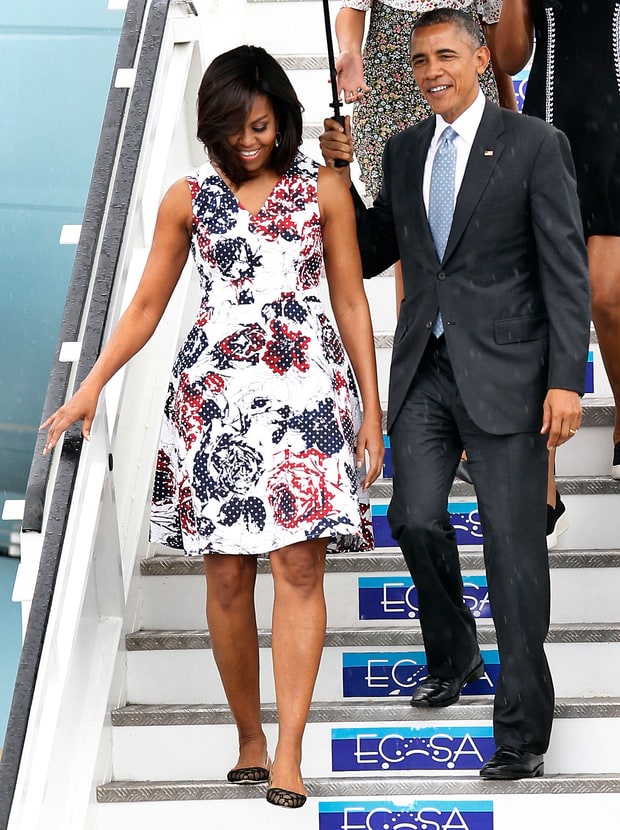 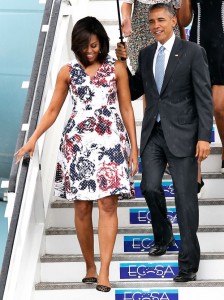 For a president and first lady who constantly berate Americans about being thoughtless, it is quite shocking to see how thoughtless the ones doing the haranguing can to be. This time, their uncaring nature was on full display when their entourage arrived in Cuba for the annual Spring Fling taxpayer funded vacation.

But! Before discussing Obama obliviousness, we need to backtrack a bit.

For starters, let’s remember that the first lady never misses her President’s Day ski jaunt to the tony slopes of Aspen. This year’s getaway was so secretive no one knew it happened. Not to worry though, while Mr. Obama golfed on a well-watered course in drought-stricken Rancho Mirage, Michelle, and her daughters exercised the entitlement they’re accustomed to by shutting down an Aspen airport.

Then, after waxing those skis, just as she does every March, Michelle gathered together mom, aka Marion the Moocher, her two daughters, for the annual pre-Easter getaway. Last year Michelle flew to China. This year, the destination was Cuba.

Also this year, Dad, anxious to embrace a dictator, tagged along.

The sad thing is that the Obamas are being feted on an island whose people are trapped in inexorable poverty. Obama won’t address it, but Castro confiscates 92% of wages earned by Cuban laborers who work for foreign companies. Meanwhile, as Michelle fritters away the hard-earned money of American taxpayers on things like $9K a night Beijing hotel suites, the average Cuban struggles to subsist on less than a dollar a day. 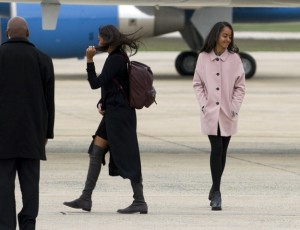 That’s why, when the “spread the wealth around” Obamas were boarding Air Force One just prior to polluting their way to Cuba, those with a keen eye for hypocrisy were not surprised to see young Sasha mindlessly strutting around the tarmac sporting expensive gray suede footwear. Those babies were a far cry from the flip-flops Cubans wear and looked a lot like celebrity favorite Stuart Weitzman Lowland Thigh High boots that cost about $800 a pair.

Did Sasha’s “My Brother’s Keeper” parents consider what $800 could do for an average impoverished Cuban? Heck, $800 is more than two years wages and in a socialist food production system would cover the cost of a truckload of powdered milk.

Don’t these people realize that permitting a 14-year-old girl to wear $800 boots to Cuba smacks of elitism and tactless inconsideration toward the plight of the poor? Especially if the girl wearing the boots is the daughter of a president who confronts poverty by posing questions like: “Do we have the political will, the communal will to do something about it?”

Thankfully, in flight, young Sasha peeled off her costly kicks and emerged from the plane in black sneakers and a matching Ivana knit frock by Shoshanna, the latter of which sells for $385.

Sorry, but wearing haute couture in Cuba is like royalty feasting on Wagyu beef in front of peasants gagging down gruel. Wearing designer clothes to Cuba waves an unnecessary level of ostentatiousness in the face of economically destitute people.

Then again, the Obama daughters did each wear a $20K designer ball gown to the Canadian State Dinner recently – so in comparison, to some, a measly pair of $800 boots and a paltry $385 dress is toning it down.

Not only that but look at the example Mom sets.

When the FLOTUS descended from Air Force One to greet a nation whose government strictly rations food, whose citizens live crammed together in decrepit hellholes without hot water, the first lady sent quite a message in a $2,190 Carolina Herrera dress.

Remember when Michelle showed up to ladle out soup in a DC soup kitchen wearing $565 Lanvin cap-toe sneakers? Her preference now is Carolina Herrera. In fact, she wore a similarly priced robin’s egg blue outfit to greet socialist Pope Francis who said that to “Not to share [the] wealth with poor is to steal.”

One can’t help but wonder what the guy who also believes in welcoming illegal immigrants, just not into the Vatican, thought of Mrs. Obama wearing a modest $2,300 ensemble?

We’ll never know, but what we do know is that in the beginning of her reign Michelle exhorted the downtrodden by telling us that, “…in order to get things like universal health care and a revamped education system…someone is going to have to give up a piece of their pie so that someone else can have more.”

Just don’t ask Michelle to forfeit her pie! Besides, she’s in Cuba and Cubans already have universal health care and free education.

So, how about the dress? If Michelle, really thinks Americans should share “pie,” maybe she could set the example by selling her red, white and blue Carolina Herrera. The proceeds from just that one frock would cover six years worth of wages for one Cuban worker, or pay a day’s wages to 2000+.

And if that’s too painful a thought for the FLOTUS, maybe she should throw out dollar bills to hordes of hungry Cubans, and do it while envisioning herself standing on the balcony of the White House during the upcoming Easter Egg Roll tossing hunks of cake to the huddled masses below.

So, the next time hurting Americans get a lecture about “leveling the playing field…sharing the wealth” or divvying up our pie, remember that Michelle wearing a $2,000 dress in Cuba proves the ones putting on the hurt are advocates for themselves, not the poor.