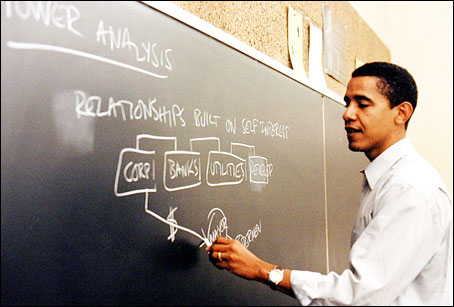 Recently, when disrupters showed up at a Trump rally in Chicago, the first thing that came to mind was that America’s most notorious community organizer could be the wizard behind the curtain orchestrating what was being sold as an organic occurrence.

In Saul Alinsky’s 1971 book Rules for Radicals, the late author could have been describing Obama’s last seven years in office when he wrote that an efficacious organizer should be “an abrasive agent to rub raw the resentments of the people of the community; to fan latent hostilities of many of the people to the point of overt expressions.”

The father of community organizing taught that once people are “whipped up to a fighting pitch,” the agitated could be directed to participate in rowdy demonstrations. By employing those techniques on the international level, Alinsky’s star pupil, Barack Obama, has successfully managed to whip up global chaos.

Back in Chicago, in the early 1980’s, Greg Galluzzo taught student Barack Obama to avoid the spotlight because the fundamental goal of a grassroots activist is to lead “indigenous” communities to believe they were taking action independently.

As 2016 election protests continue to gather steam, it appears as if Galluzzo’s street-smart pupil is having trouble hiding his preoccupation with the Republican candidates.

Obama has even managed to remain mum about his associations with Soros-financed MoveOn.org, Chicago’s Democratic Socialists of America (DSA), and the Communist Party USA, all of whom have also caused disruptions at recent Trump rallies.

In addition to some of the president’s dearest friends, the motley crew of community-organizing characters on the march also includes like-minded Bernie supporters who have promised that if Donald J. Trump wins the Republican nomination, mass civil disobedience is scheduled to take place that will make Chicago’s 1968 “Battle of Michigan Avenue” seem like a block party.

That’s why, despite a poor attempt at keeping a low profile, if Obama believes that Alinsky-style “direct action” possesses the power to keep a Republican billionaire populist or a “tea bagging” Constitutionalist out of the White House, it’s doubtful he will be able to sit back and let the skills he honed in Chicago go to waste.

After years of observing this president’s partisan bullying, one thing is certain, try as he might to hide it, over the last two terms, Barack Obama’s intrinsic dedication to Alinsky tactics has never wavered.

Remember when the New Black Panthers intimidated white voters with billy clubs at a Philadelphia polling place during the 2008 election?  Then, remember how the Tea Party was targeted and harassed by the IRS prior to the 2012 election?

Barack Obama’s training in Chicago by the great community organizers is showing its effectiveness. It is an amazingly powerful format, and the method of my late father always works to get the message out and get the supporters on board. When executed meticulously and thoughtfully, it is a powerful strategy for initiating change and making it really happen. Obama learned his lesson well.

That’s why, if America is fundamentally transforming into an Alinsky playground, and if prior to a public demonstration Black Lives Matter Chicago just happens to suddenly drop in on the White House, Barack Obama is a suspect.

Think of it! Every time Obama disparages a Republican candidate, he’s merely exercising the Alinsky tactic of ridicule that served him well on the Southside of Chicago.

Recently, at a St. Patrick’s Day gathering Obama had this to say:

The longer that we allow the political rhetoric of late to continue, and the longer that we tacitly accept it, we create a permission structure that allows the animosity in one corner of our politics to infect our broader society. And animosity breeds animosity.

By choosing to forgo nibbling on Irish Soda bread and discussing his Moneygall roots,  Obama turned a luncheon into an opportunity to fuel street-level strife.  By doing what comes naturally, Alinsky’s charge purposely contributed to the “vicious atmosphere” he claims to reject.

And for those who tend to compartmentalize, those St. Patrick’s Day sentiments came from a verbally vindictive pol who, when not busy stirring up international turmoil, breeds domestic animosity by depicting white Americans as religious fanatic gunslingers looking to express “antipathy toward peoplewho aren’t like them.”

In keeping with that line of thinking, Barack Obama habitually panders to African Americans, Latinos, young voters, and women.  By doing so, this president confirms that the principal objective of everything he says and does is directly related to organizing communities to take action on behalf of the left’s interests.

Yet despite those and other not-so-well-hidden attempts to practice street activism, Obama does seem somewhat uneasy.

Recently, at a DNC event in Austin, Texas, Barack expressed apprehension when he pointed out that “Change doesn’t happen overnight…we never get 100 percent of change.”

Apart from the personal satisfaction this subversive enjoys from the extensive damage he’s already done to America, if ever there were a reason to drag into the middle of the Oval Office the infamous chalkboard young Barry used when marshaling the Chicago multitudes, fear that “Hope and Change” will be toppled by someone like Trump would be that reason.

Unconvinced? Let’s remember that prior to the failed Arab Spring it was Obama that helped to organize the Arab street.

So, as the “largest civil disobedience action of the century” looms on the American street, there is little doubt that deep in the bowels of the White House Barack Obama is organizing Democrats to usher in the Democracy Spring.