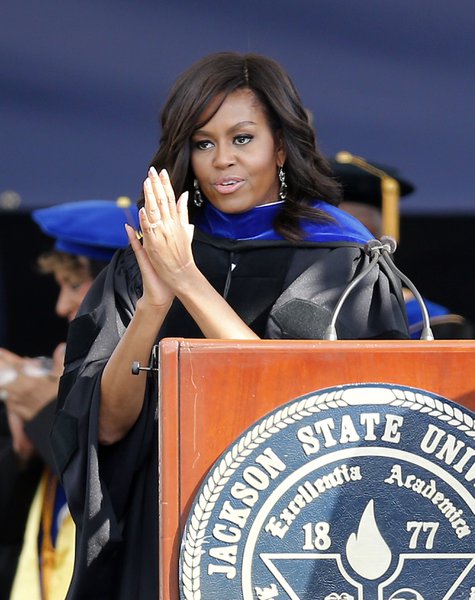 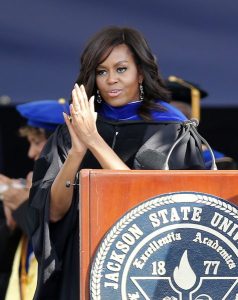 Originally posted at at American Thinker.

Last year, the first lady, Michelle Obama, gave a commencement speech at Alabama’s Tuskegee University that sounded more like she was paying homage to black activist W.E.B. DuBois than the school’s founder Booker T.  Washington who, as an ex-slave, believed character and hard work were key to improving the plight of the black man.

Then again, Michelle is part of the illiterate gang who ousted evil slave owner Andrew Jackson from the $20 bill without researching the philosophies escaped slave Harriet Tubman stood for. Wait until Obama, who misquoted MLK on his Oval Office rug, realizes Underground Railroad conductor Tubman was a devout Christian whose pistol-packing ways mirror Sarah Palin, not Maxine Waters.

Nonetheless, Michelle recently returned from a trip with the guy who lectures continents on gay rights and who, after wishing Queen Elizabeth happy 90th birthday, threatened Britain by warning that voting “Yes” on a referendum to bow out of the EU would place the UK at the ‘end of the TTIP trade deal queue.’ Sorry, but that sounds more like Chicago-style coercion than a friendly suggestion to an ally.

Either way, Mrs. Obama is not unlike her Saul Alinsky-trained husband. The FLOTUS also ‘sees the world not as it is but as it should be’ and feels it’s her duty to set the non-compliant straight.

That’s why, after returning from making enemies overseas, Michelle quickly donned her tam and gown and headed to give a confrontational commencement speech in a state still stigmatized by a dark image concerning civil rights.  It was at historically black Jackson State University that Michelle chose to include in her remarks a rebuke to Mississippi for daring to uphold the First Amendment.

As part of the discourse, the FLOTUS used voting rights as the vehicle to refer disparagingly to the “religious freedom bill” recently signed into law by governor Phil Bryant. The basis of the bill is to protect those who, because of a religious opposition to things like same-sex marriage, extramarital sex, or transgenderism, refuse to provide services to whose behavior falls outside what they believe to be Scriptural precepts.

Governor Bryant maintains that the “religious freedom bill” was passed “to protect sincerely held religious beliefs and moral convictions… from discriminatory action by state government.” Bryant said the new law “merely reinforces” existing religious freedom rights on the state level, “does not limit any constitutionally protected rights or actions,” and does not challenge federal law.

The bottom line is that Americans are still free to live any way they choose. With that in mind, religious freedom should mean that no one is strong-armed to accept or accommodate conduct that runs contrary to a person’s deeply held faith.

It’s good to know that, in the name of nondiscrimination, dear FLOTUS can always be counted on to verbally discriminate against anyone who desires to remain true to constitutional or religious convictions.

That’s why; by comparing the God-given civil rights of black Americans to gender identity confusion and illegal immigration Mrs. Obama pretty much exploited Jackson State University graduates. Michelle got all preachy saying, “We see it right here in Mississippi — just two weeks ago -– how swiftly progress can hurtle backward. How easy it is to single out a small group and marginalize them because of who they are or who they love.”

It’s obvious from that statement the FLOTUS believes that if ‘who you are and what you believe’ make you hesitant to share a restroom with a transgender; you are worthy to be discriminated against. Otherwise, according to Michelle, ‘singling out and marginalizing’ is unacceptable.

And so, rather than commend her audience’s achievements, or inspire black graduates to forthcoming success, the FLOTUS turned a graduation into an opportunity to publicly reprimand a Republican governor and to stir animosity by insinuating that Mississippi is reverting back to civil rights abuses.

So we’ve got to stand side by side with all our neighbors –- straight, gay, lesbian, bisexual, transgender; Muslim, Jew, Christian, Hindu immigrant, Native American — because the march for civil rights isn’t just about African-Americans, it’s about all Americans. It’s about making things more just, more equal, more free for all our kids and grandkids.

The FLOTUS must have gotten confused because, while secretly viewing Christians as the one’s doing the oppressing, she mistakenly included Jesus-following, gun, and Bible-clingers in her “march for civil rights” appeal.

More importantly, since when is a force against one’s will to benefit another’s will the definition for the upholding of civil rights? And if that is how things now work in Obama’s fundamentally transformed America, shouldn’t Halal butchers be mandated, despite religion, to sell legal pork products to customers who demand bacon?

Besides, if  ‘justice, equality and freedom’ are the goals, how does one carp about laws being passed that seek to ensure the right to “freedom of religion?” Moreover, in what way does the president saying, while in the UK, that a law “should be overturned” that preserves religious liberty make America “more just, more equal” and freer?

In the end, Michelle’s anti-freedom/ averse-to-equality rant are just more drivel issuing forth from a woman who, together with her subversive spouse, profess love for America and adherence to the Christian faith, but exhibit neither.

Instead, in an effort to destabilize the Constitution, disparage Biblical values, and chop away at conventional social mores, every year, Michelle “turns up like a bad penny” at historically black commencement ceremonies where she attempts to stir up racial divisiveness and gain political points by playing the victim card.

At the end of the day, Mrs. Obama can be counted upon to defend against intolerance by speaking prejudicially against the foundational principles held dear by great historical figures such as the Christian freedom fighter about to be memorialized on the front of the $20 bill.