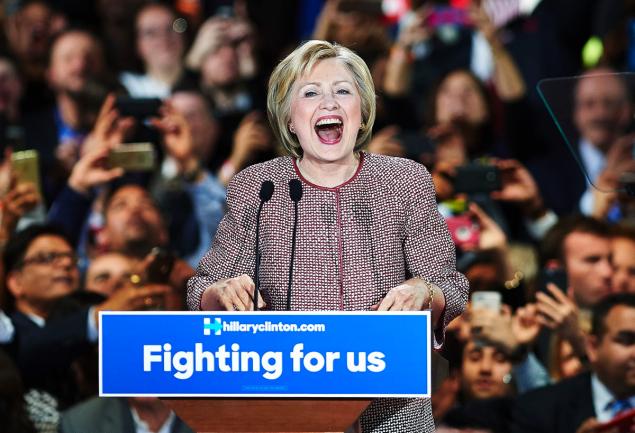 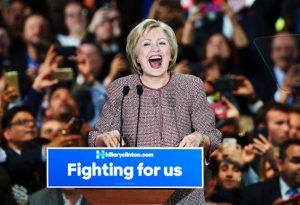 On the night of the New York State Democrat primary, after beating Bernie Sanders who was raised in a rent-stabilized apartment in the Midwood section of Brooklyn, Hillary Clinton’s pretentiousness was on full display.

Sporting an affectatious grin, Miss Hillary, with her usual dose of disingenuous corniness, told the doting flock of misguided sheeple, “Today you proved once again there’s no place like home!”

What became clear that night was that the room full of toadies cheering on Hillary were either unaware, or didn’t care, that the unscrupulous carpetbagger calling New York “home” is an Illinois-born, Connecticut schooled, Arkansas groomed, and ultimately, Washington DC bound — fake, phony, fraud.

In other words, in the claw to the top, Hillary misuses whole states like rungs on a ladder.

And, believe it or not, the fault lies with intellectually challenged folks in states like New York who feel that inducting a post-menopausal pair of ovaries into the White House is long overdue.

Therefore, with low stores of estrogen as the primary criteria, the sycophants wearing balloon hats and waving Hillary placards seem willing to overlook prevarications from a woman whose whole life has been a sham. Let’s not forget, when not coughing up a lung, Hillary feigns being married to a philanderer she hasn’t co-habited with for almost four decades.

An attempt to barrage the unwashed masses must be why nouveau riche multimillionaire Hillary recently felt moved to malign billionaire Donald for having a fleet of golf carts stuffed to the gills with cash. The problem is that Hillary critiquing Donald for being rich is sort of like Madonna condemning Kim Kardashian for being an exhibitionist.

After all, in a little more than a decade, the Clinton machine has managed to bilk $153 million out of the coffers of Wall Street firms by giving speeches for $250K a pop. So, Hillary criticizing anyone’s affluence is a perfect example of how this well-practiced chameleon changes color to trick the easily duped.

According to the woman whose daughter lives in a 5,000 square foot, $10.5 million, Madison Avenue apartment, self-made billionaire Trump’s problem is that he jets into a campaign stop in the lap of luxury, then flies out to return to his opulent digs in Trump Towers.

Hillary, who never created a job in her whole miserable life, and has lived primarily off the largesse of the American taxpayer, criticized the businessman who created 34,000 jobs, because she said, he said, “wages are too high in America and [he] doesn’t support raising the minimum wage.”

The doyenne of The Clinton Foundation, a family organization whose logo features Clinton name, then offered guidance to a man whose surname adorns the Trump Towers, saying:

Come out of those towers named for yourself and actually talk and listen to people. At some point, if you want to be president of the United States, you have to get familiar with the United States; you have to spend time with Americans of all sorts and backgrounds in every part of our country.

Did Hillary say: “Americans of all sorts and backgrounds?” Wait! The woman admonishing Donald for lack of multicultural exposure is the same individual who teamed up with corrupt NYC mayor Bill de Blasio to crack “CP time” jokes.

Either way, maybe Mr. Trump should pay heed to Hillary when she says:

Don’t just fly that big jet in and land it and go give a big speech and insult everybody you can think of and then get on the big jet and go back to your country clubhouse in Florida or your penthouse in New York. I somehow don’t think that puts you in touch with what is going on.

After all, before flying exclusively in a $39 million, 16-passenger, Gulfstream G450 private jet, and after being chauffeured around for 36 years, Hillary did get “in touch with what is going on” by enduring the Scooby-Doo for a week, and riding in a Bronx subway for two stops.

And when not ignoring commoners in wheelchairs, it’s Hillary Clinton, not Donald Trump, who willingly braves the threat of E Coli to eat Chipotle like the little people.

Notwithstanding those and many other hypocrisies, when not tying up NYC traffic to get a $600 haircut at Bergdorf Goodman, or demanding a luxury presidential suite, this populist pretender, with her eye fixed like a laser on the White House, spends time on Listening Tours “talking and listening to people” she cares nothing about.

That’s why, despite Hillary’s history of deceitfulness and unbridled ambition, it’s astounding that there are still minions who support someone who left the White House in 2001 driving a U-Haul packed with stolen items, and who later claimed that, at the time, she was “dead broke.”

In the end, if fake Benghazi videos, dead Americans, and compromised email servers fail to shake up Clinton’s supporters, then, come November, not even a Trump Train will be able to stop Sir Edmund Hillary’s namesake from pulling off her greatest hoodwink.