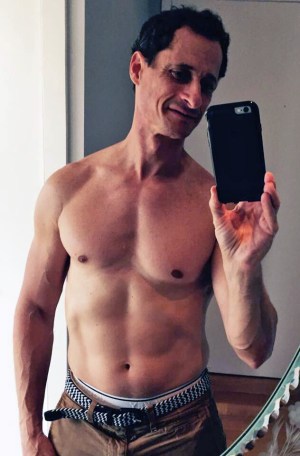 Last month, while his wife was at work, and his 4-year-old son Jordan Zain slept beside him, Anthony Weiner, aka Carlos Danger, spent the evening sexting a picture of his engorged manhood to a shapely Trump supporter. Weiner got sloppy and got caught.

Recently, the world’s most famous sexter was caught again.

For months, while his wife Huma was busy administering CPR to Hillary Clinton, Weiner, with too much free time on his hands, was sending lewd messages to a school-aged girl. This time, the object of the sext addict’s online attention was a 15-year-old teenager from North Carolina.

And while that may be shocking to some, what’s more shocking is the liberal outrage over Weiner’s purported shenanigans. Aren’t liberals usually the ones celebrating unbridled sexuality? And don’t the left make it their life’s work to sexualize children as early as possible?

Yet extreme abortion supporter Governor Andrew Cuomo responded to the Weiner revelations in the following way: “If the reports are true, it’s possibly criminal and it is sick.”

Cuomo expressed an amazing level of moral indignation, especially because the judgmental New York governor supports underage girls having access to abortion without parental notification. If liberals like Cuomo believe that youthful girls have the right to choose at 13 years old, why shouldn’t a 51-year-old man feel comfortable sexting a consenting child of fifteen?

The same holds true for New York City mayor de Blasio, who recently signed an executive order mandating that city facilities provide gender-neutral bathrooms. If de Blasio would allow a little girl to share a bathroom with a 45-year-old sexually confused male, who is he to condemn Anthony Weiner by suggesting that the ex-congressman “address his issues”?

Moreover, in keeping with de Blasio’s bathroom logic, wouldn’t a man participating in online sex play with a high school sophomore be exonerated if the girl self-identifies as a consenting adult?

Let’s not forget, Anthony Weiner is a former politician from a city where kindergarten teachers are asked to refer to students by their preferred gender. So if a 6-year-old can select a gender, why can’t a schoolgirl choose to exchange salacious texts with a guy who posts pictures of his Johnson while his wife is otherwise playing handmaiden to a presidential hopeful?

Add to all those glaring contradictions, Anthony Weiner hailing from a state where high school student’s sex education includes activities where:

With that in mind, maybe Anthony was merely homeschooling the girl. Or maybe, like last month, the self-proclaimed “chick-magnet” was seeking a play date for his son.

Play date or not, Weiner still has to deal with the ramifications stemming from a teenaged girl telling the Daily Mail she met her sext-mate on Twitter last January and that the two conversed for months through direct messages.

Based on screenshots, in their first chat, Weiner told the teen she was “kinda sorta gorgeous.” From there, the duo moved up to Skype and an encrypted app that, unlike the cloth Hillary used when she wiped her email server, deletes messages after a first reading.

Besides allegedly sending the schoolgirl extremely vulgar direct messages referring to what he’d do to her private parts, Weiner also sent shirtless pictures of his torso, a swimming pool selfie, and one photo with his hand stuffed down his infamous drawers.

The North Carolinian student shared that Weiner, whose estranged wife spends most of her time with a woman whose husband is actually accused of rape encouraged her to engage in “rape fantasies.” Judging from the captured images, the former congressman, who also asked the girl to “to touch herself” and “dress up in schoolgirl outfits,” knew full well he was chatting with a minor.

After last month’s scandal involving the raunchy text Weiner sent featuring his sleeping son, the Administration for Children’s Service said it would investigate what went on at home while Huma was on a campaign bus placing cold rags on Hillary’s forehead. The agency would not comment on the teen sexting disclosure, but despite Huma calling the accusations a “hoax,” said it “routinely investigate(s) new allegations pertaining to current open cases.” Federal authorities in North Carolina did not return comment.

Meanwhile, sounding a lot like Hillary Clinton admitting that her email setup was a “mistake,” Weiner, who didn’t deny “flirtatiously” sexting the girl he called “Baby,” confessed that he had “repeatedly demonstrated terrible judgment about the people [he had] communicated with online and the things [he had] sent.”

I am filled with regret and heartbroken for those I have hurt. While I have provided the Daily Mail with information showing that I have likely been the subject of a hoax, I have no one to blame but me for putting myself in this position. I am sorry.

Correct me if I’m wrong, but since when does a morally relativistic liberal pronounce anything as “terrible,” especially if it concerns sex?

Either way, disingenuous regrets, liberal contradictions, hyper-sexualized children, and gender-identity issues aside, now that he’s single again, if Anthony Weiner really does have a proclivity for underage girls, the former congressman should really visit Slick Willy on “Pedophile Island.” Because at the end of the day, after being caught in the act three times, Weiner has a lot to learn from Bill Clinton about how to elude negative consequences when caught with your pants down.