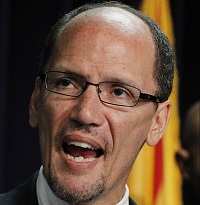 If it concerns illegal immigrants, Democratic National Committee Chairman, Tom Perez, strongly believes in sanctuary cities making sovereign decisions. On the other hand, Perez also strongly believes “That [abortion rights are] not negotiable and should not change city-by-city or state-by-state.”

Judging from their 55-page, pro-abortion manifesto, the Democratic Party platform officially thinks that the right to kill the unborn takes precedent over human rights. That’s why, henceforth and in perpetuity, every candidate who runs as a Democrat must now stand on the side of abortion because, according to Tom Perez, “every woman should be able to make her own health choices. Period.”

As the titular head of the most progressive pro-death political party in American history, DNC chairperson Perez also demands from party members “absolute ideological purity.” Thus, pro-life Democrats (which is sort of an oxymoron) are not welcome in the party. This sentiment comes from a guy who criticizes Trump for alleged dictatorial tendencies.

Nevertheless, if given the opportunity, litmus-test Perez would likely argue that besides feeling that the unborn are not human life, abortion is “settled law” and settled law should not be superseded by emotional, personal, or religious belief. In other words, there is zero room in the Democratic Party to discuss the rights of the unborn, scientific evidence, or what ultimately constitutes God-ordained humanity.

Yet when it comes to justifying the presence of illegal aliens, Perez diametrically opposes the argument he uses to defend killing human babies in the womb.

For instance, the Democratic Party rationalizes abortion on demand by stressing that baby killing is a Constitutional right that must be protected. If they really believe that, why do those on the left likewise fight to help break immigration law?

Tom Perez stresses that abortion rights are “not negotiable and should not change city-by-city or state-by-state,” but then changes that opinion if a city or state harbors illegal felons. All in all, if a city or a state decides to defy the law and shelter illegals, a non-negotiable Tom Perez and the Democrat Party encourage them to do just that.

Recently, at a May/Labor Day rally outside of the White House, Mr. Perez, who sees Trump and the Republican Party as a threat to having carte blanche to cart 3,000 dead fetuses to the incinerator every day, told illegal immigrants and hordes of labor party representatives that “The Democratic party will always be here, fighting for you.

Shouting to the crowd in Spanish, Perez spurred the gathering to new heights by reminding them that the Democratic Party and the illegal community share the value of diversity. Not for nothing (as they say in Brooklyn), but judging from the news of late, some of the other assorted values Democrats and illegal felons share are fraudulence, thievery, law flouting, and, on occasion, rape and murder.

Moreover, if this dispute were truly about furthering diversity, why would the Democratic Party help illegal alien women gain full access to abortions that extinguish the lives of those Perez claims, if born, would add to the shared cultural mixture he so highly touts?

Besides not mentioning Trump by name, and before broaching the topic of big labor, bi-lingual Perez had a poignant message that epitomizes the hypocrisy that resides within the Democrat Party and this is what he said, “No human being is illegal, we must treat everyone with dignity.”