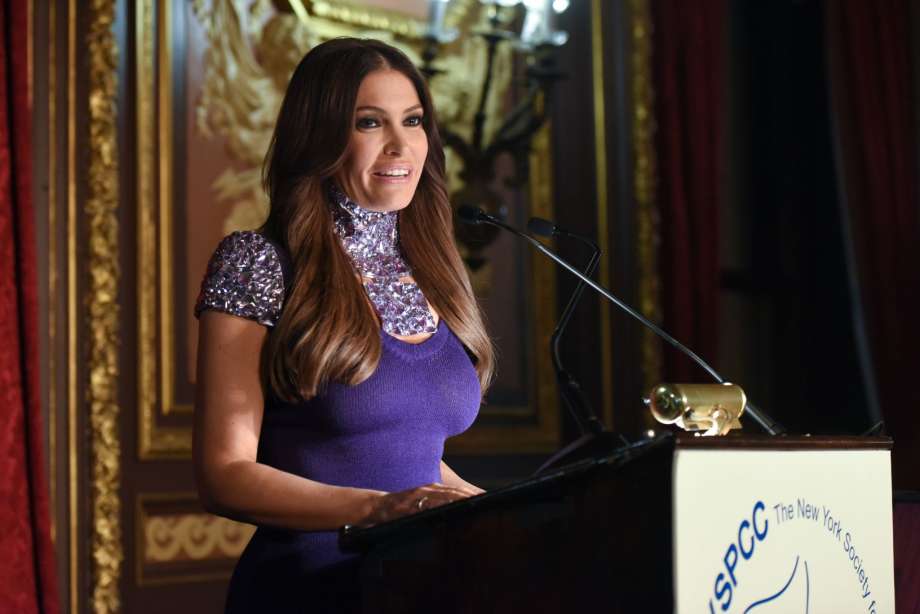 There’s renewed talk that former Victoria’s Secret model/former first lady of the City by the Bay, and current Fox News host, Kimberly Guilfoyle is negotiating with the Trump administration about possibly replacing Sean Spicer as the one who will be dealing with the ornery White House press corp.

If it actually does happen, Guilfoyle will have to make the tough transition from swinging her pins in time to music in front of the camera on The Five to obscuring two of her four best assets behind a podium adorned with the presidential seal.

Think of the potential jam up of notepads trying to squeeze through the door every time Kimberly, in a plummeting neckline, sashays up to the lectern to take questions.

Instead of the usually irritated redhead guy, the person getting everyone hot under the collar will be a curvaceous brunette, poured into a tight red dress, flashing a Colgate smile. The scene will be sort of like Boardwalk Hall in Atlantic City, except the White House press briefing room will have its very own brainy Miss America answering tough questions while everyone desperately tries to focus on her intellect.

In other words, if Kimberly takes the job, the White House Press Secretary will go from Spicer to even spicier!

Besides being a Victoria Secret runway model, and a Fox News anchor, 48-year-old Guilfoyle’s resume qualifies her for the job because it includes work as a former Los Angeles and San Francisco prosecutor.

As for her personal life, Fox’s most famous brunette was married for four years to the current Lt. Governor and former mayor of San Francisco, liberal left-wing-loon-nutcase Gavin Newsom. The couple separated in 2005 because their bi-coastal marriage was under pressure.

Letting no moss grow under her Manolo Blahniks, the next year, Kimberly divorced Gavin and married Eric Villency the CEO of the Villency Design group and gave birth to a son named Ronan Anthony Villency.

Now, the New York Times is reporting “Trump has raised the Fox News host … to allies as a possible press secretary.” Guilfoyle recently said if she is offered, and decides to take the White House press secretary job, it will mean she’ll have to relocate from New York City to Washington, DC and that move will mean leaving her Fox family and a huge cut in pay.

Not to worry, low cuts and pay cuts are not a problem for Guilfoyle who claims:

I’m a patriot, and it would be an honor to serve the country. I think it’d be a fascinating job. It’s a challenging job, and you need someone really determined and focused, a great communicator in there with deep knowledge to be able to handle that position.

Recently, Kimberly, who has admitted to having her first celebrity crush on Howard Stern, had this to say about how to ensure successful press briefings:

If you want to be successful and do communications with President Trump, you have to be someone who he actually wants to spend a little bit of time with. You’ve got to insist on getting in front of POTUS, talk to him, and have like five, six minutes with him before you go out there and take the podium, and otherwise, you’re driving blind.

“It has to be somebody with a very close relationship, where there’s trust there, there’s inherent loyalty, someone who’s been there from the beginning,” she added.

Having known Trump and his family for more than a decade, Kimberly believes she just might be that person.

“I think I have a very good relationship with the president,” Guilfoyle said. “I think I enjoy a very straightforward and authentic, very genuine relationship, one that’s built on trust and integrity, and I think that’s imperative for success in that position.”

While all this is press secretary talk is very exciting for Kimberly, if she does leave, it poses a huge problem Fox News.

Why? Because to the amusement of male news junkies all across America, since 2006, Kimberly, her décolletage, long chestnut tresses, thighs and legal proficiency, have been prominently featured on the “fair and balanced” network. And so, seeing as Andrea Tantaros is suing the station, if buxom Kimberly does assume the position of White House press secretary Fox News will have to work fast and furiously to hire a fresh pair of legs.