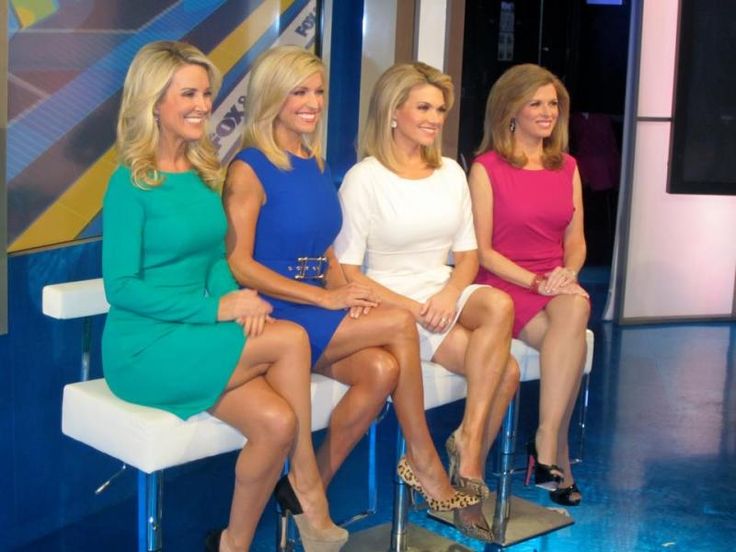 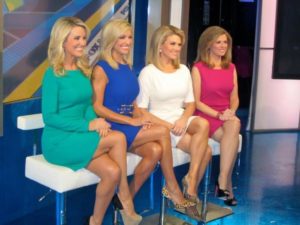 No one would deny that in advertising, sex sells.  If that weren’t the case, then attractive women wouldn’t be promoting things like cat food and sparkling water.  Over at the Fox cable news network, conservative news is the profit-making vehicle of choice, and Fox sells that product with the help of provocatively clothed commentators.

Take, for instance, Megyn Kelly.  Before setting her sights on NBC, the former Foxy News diva primed her meteoric rise to fame by discussing the events of the day in a spaghetti strap halter while showcasing designer shoes and oiled legs under a see-through glass-top desk.  For a time, the Fox News golden girl’s foray into serious journalism included ditching soft curls for a robotic ’80s hairdo that closely resembled Sly Stallone’s ex-wife, Brigitte Nielsen.

The gams and glamor worked so well for Miss Megyn that the combo jettisoned the precocious pundit right into the center of a debate confrontation with then-presidential candidate Donald Trump.

In the end, Megyn’s “world’s most beautiful people” allure ended up outweighing the seriousness of anything else in Ms. “Kelly’s File.”  And so, with Megyn gone, Fox should be honest and just confess that in addition to clips of Geraldo Rivera going mano a mano with a hurricane, the network’s official policy remains committed to daintily posing shimmering pins on sky-high stools.

The problem is that unlike men who are clueless when being beguiled by feminine wiles, women can usually discern when other women are flaunting their sexuality to attract male attention.  That’s why, to the feminine half of the Fox News audience, it’s obvious that the conservative cable news channel considers it “fair and balanced” to coerce two thirds of its on-camera personalities to double as eye candy.

Surely, Fox News would argue that the parade of gorgeousness coincidentally belongs to a group of doubly blessed politically minded female newscasters.  Either way, the Murdoch men should know that making a woman’s cleavage the emphasis of a news alert distracts from the intellect of highly accomplished women.

In fact, predictable décolletage displays are the very thing transforming Fox News into a kind of cable news Hooters.  The only difference between the two is that Hooters girls in revealing T-shirts serve chicken wings to hungry men, while Fox News fillies, outfitted in sleeveless skin-tight sheaths, serve up cable news to bored men sitting home in their pajamas.

Speaking of men sitting home in their pajamas, for the sin of responding like a man to having the news of the day shared by women emulating peacocks doing a mating dance, Bill O’Reilly of Fox’s wildly popular The O’Reilly Factor is the second high-profile loss from a network guilty of fostering an environment where Victoria Secret models sell the news.

In addition to embarrassing the Fox news giant, Bill O’Reilly’s fall from grace also exposes the hypocrisy of Fox News.

Think about it: how can Fox stand by and watch female news anchors struggle to find a ladylike position for their bare legs on a curvy couch in the morning, and then penalize their most popular host for reacting to the bait at night?  After hawking a full array of bodacious bosoms, flowing tresses and skin-tight mini-skirts, Fox firing a dude for being seduced by the wares being peddled smacks of conservative cable news entrapment.

At any point in time, did Rupert and his sons Lachlan and James advise Bill O’Reilly that if a female guest on his show bats her mink eyelash extensions and puckers her bee-stung lips, it’s not because she’s signaling interest in attending a pajama party at his Long Island home, nor is it a green light for the 6’4″ bloviator to kiss her on the lips?

In other words, other than the receptionist Bill referred to as “ hot chocolate,” what appears to have happened was that some of the women who used sex to attract a male audience on one side of the camera ended up garnering unwanted attention from Bill on the other side.

So even though the gangly senior citizen answered his hotel door in his skivvies, Bill O’Reilly deserves a break.  After all, if hairspray fumes could be converted into pheromones, judging from the line-up night after night on The Factor, poor Bill’s hypothalamus gland was likely in perpetual overdrive.

That’s why, after being in the presence of a bevy of newscasters who share the news while crisscrossing their legs like Sharon Stone under interrogation, it stands to reason that the big guy couldn’t help grunting at some of them like a testosterone-infused boor.

Even still, instead of succumbing to the sexually charged atmosphere nurtured by the Fox News Channel, Catholic school- and Harvard-educated O’Reilly should have at least known not to bite the carrot.  Bill should never have behaved like a troglodyte.  Instead, the host of The Factor should have exercised self-control by aligning his 1960s caveman thinking with current safe-space standards.

Regrettably for O’Reilly fans, it’s too late for Bill to embrace his feminist side, don a man-bun, and save his job.

In the end, if Bill did harass the women alleging he made unwanted advances toward them, then there his no defense for his behavior.  However, Bill is still a man and would have to be either castrated or dead not to react to some of the sensuality being passed off as journalism over at the Foxy News network.