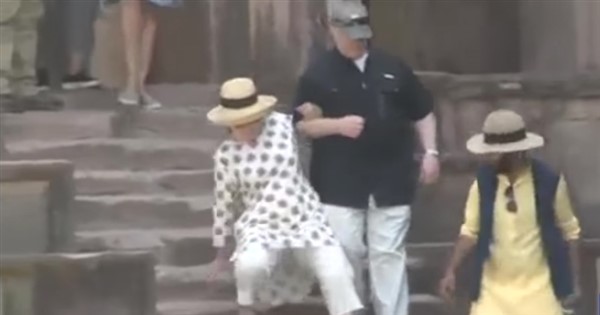 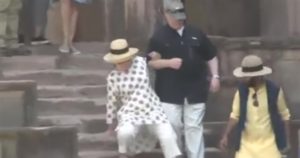 Fourteen months into her “What Happened” tour, Hillary, with Huma in tow, decided to fly a private jet to India.  Part tourist, part guest speaker, while visiting Jahaz Mahal in Dhar’s Mandu, Hillary slipped and fell down a flight of stairs – twice.

Thinking back on one of her more ignorant comments, the only explanation for such an awkward misstep is that the ghost of activist Mahatma Gandhi, the guy she once joked ran a gas station in St. Louis, Missouri, shoved her from behind.

Hillary’s attire for her acrobatic spill was a jaunty straw hat, strappy Birkenstocks, a kurti, and capris that resembled enormous white sails.  Even stranger than her getup were Hillary’s male escorts, especially since a few days prior, she had accused white females of leaning on men to tell them how to vote.

It happened after Hillary was introduced by a journalist in Mumbai as the “woman who should have been the president of the United States of America.”  While there, Clinton spoke to an India Today Conclave about – you guessed it – why she lost the election.

During the Q&A, India Today editor and host Aroon Purie asked Clinton a question about how 52 percent of white women could vote for Trump, especially after Access Hollywood released a tape in the final weeks of the campaign featuring Trump indulging in boy talk with Billy Bush.

Maybe a more thought-provoking question would have been for Mr. Purie to ask Hillary how she managed to get the other 48% of the white female vote after staying married for 43 years to a philandering husband credibly accused of rape, sexual abuse, and other tawdry acts of sexual impropriety.

Hillary blamed white women who she said didn’t vote for her because white women are pushed around by white men who support Trump.

The woman who would lean on two men to make her way down 15 steps went on to say that white women face an “ongoing pressure to vote the way that [their] husband[s], [their] boss[es], [their]  son[s], whoever, believe[ they] should.”

How is Hillary’s opinion that white women should have voted for her merely because they’re white and women any less sexist and racist than the belief that domineering white males control white females?

Either way, according to Hillary Clinton, it’s subservient white women who are responsible for her not having the opportunity to slip and fall down the Grand Staircase in the White House!

Not black women, not Muslim women in full burka, not Hispanic women married to machismo husbands, and especially not Indian women whose husbands run gas stations in Missouri and Dunkin Donuts in Delaware.

Mrs. Clinton told the crowd she was winning with those easily influenced white women until another man persuaded them to vote for Trump.   That man was FBI director James Comey.

According to Hillary, when Comey, a typical white male, informed Congress two weeks before Election Day that the investigation reopened into the private email server the former secretary of state had hidden in a bathroom closet, the news swayed white females.

All of a sudden white women, who were going to vote for me and frankly standing up to the men in their lives and the men in their workplaces, were being told, ‘She’s going to jail. You don’t want to vote for her.  It’s terrible, you can’t vote for that.’  So, it just stopped my momentum and it decreased my vote enough because I was ahead.  I was winning, and I thought I had fought my way back in the ten days from that letter until the election.  I fell a little bit short.

“I think that it was part of a historical trend that I was bucking and then it collapsed on me,” Clinton added.

Hillary stereotyped white females as those who can’t think for themselves, are easily influenced, lack conviction, and are attracted to overbearing troglodytes.  Then Mrs. Clinton charged Caucasian females with marrying and working for white men who threatened them into electing a white man, who, when not colluding with Russians, grabs women’s private parts.

Clinton followed her belittling of white women with insulting Americans of every gender and race when she portrayed Trump voters as gluttonous reality TV-loving children who prefer fast food and ice cream to wise motherly advice about eating spinach and growing up strong.

Hillary, who is about as entertaining as Barack and Michelle Obama dancing for Diwali, said:

If people were looking for a reality TV campaign, maybe I should have given them more entertainment.  I’m the mother who says, ‘Eat your spinach, you’ll grow up strong.’  Someone else is saying, ‘Eat all the fast food and the ice cream you can possibly stick in your mouth.’

Aroon Purie probed the matronly seer by bringing up Trump and Russian collusion.  Purie asked, “Do they have something on him?”  Clinton, whom they have lots on, and who has a trail of money behind her that reaches to India and back, replied: “Follow the money.”

Speaking of “following the money,” Hillary “Uranium One” Clinton amused the audience when she expressed the opinion  that “Trump [has] quite an affinity for dictators.”  Hillary said, “He really likes their authoritarian posturing and behavior.  He does have a preexisting attitude of favorability toward these dictators, but I think it’s more than that with Putin and Russia.”

Then, two days after saying the United States does not “deserve” the presidency of Donald Trump, indefatigable Hillary, looking a lot like Trump-critic and U.S. skier Lindsey Vonn, wound down her “What Happened” tour of India by sliding down a flight of stairs.