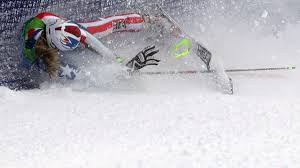 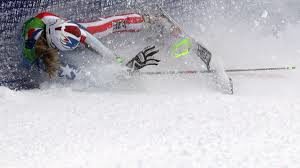 Karma is defined as “destiny or fate, following as effect from cause.” In Christian circles, it’s the Biblical principle of “sowing and reaping.” Time and again this simple cause and effect pattern seems to afflict those who publicly deride our current president. The trend started to emerge soon after a bevy of Republican candidates systematically were eliminated from the race for the White House and Hillary was roundly KO’d on Election Day.

Take for example US skier and Olympic gold medal hopeful, Lindsey Vonn. Before the XXIII Olympic Winter Games in PyeongChang Lindsey proudly announced that she would represent the American people in South Korea, but not President Trump. Soon after that presidential proclamation, Lindsey found herself slipping and sliding and crashing into walls.

As a result of Lindsey’s hubris, the injured Olympic darling failed to medal in her event. The disaster that followed Lindsey publicly renouncing Donald Trump should probably be called “The Lindsey Vonn Effect” for that which occurs whenever Trump-bashing culminates in an unfortunate event.

Hillary Clinton has suffered many such moments. Since she lost the 2016 election to Trump a desperate Hillary has been traveling around trying to vindicate herself to whoever will pay large sums of money to listen to her try to explain What Happened.

“The Lindsey Vonn Effect” began before the election but kicked in fully after Hillary lost and started hawking her explanatory book. In fact, in October of 2017, Mrs. Clinton while on a “What Happened” book tour in London, broke her toe after falling down a flight of stairs. The undefeatable woman who Democrats think had the election stolen from her hobbled around in a boot for months.

More recently, in India, while dressed in an ethnic outfit that looked like a cross between hospital scrubs and traditional Indian attire, Mrs. Clinton was touring the 15th-century Jahaz Mahal in Dhar’s Mandu mere hours after trash-talking Donald Trump. That’s when Hillary slid down the stone staircase. Was Hillary the victim of “The Lindsey Vonn Effect”?

Tripping and falling isn’t Hillary’s only affliction. In fact, while out justifying her profound loss on the liberal speaking circuit, Hillary will frequently be shut down by uncontrollable coughing fits.

Hillary’s not the only one who has felt the sting of “The Lindsey Vonn Effect.”

For one, Trump-hating comedian Jimmy Kimmel has been unrelenting in his criticism of the President, especially on issues such as healthcare and the Second Amendment. Apparently, Kimmel was so busy hating the POTUS he didn’t take time to notice the negative critics-versus-Trump pattern.

Thus, after hosting this year’s Oscar show, Kimmel fell victim to “The Lindsey Vonn Effect.” Despite being directed to avoid the topic of politics, during the broadcast, Kimmel oozed Trump-revulsion whenever he could fit it in. The next day, Kimmel delivered the Academy viewer numbers that reflected “an all-time low”.

Let’s just say that Kimmel experienced ratings on par with Hillary Clinton’s gymnastic tumble midway down a flight of stairs in India.

In other words, sort of like Lindsey found out; it’s never a good idea to publicly go mano y mano with Donald Trump, especially if you don’t want to experience mortification in front of the entire world. Just ask comedian Kathy Griffin. Kathy is a woman who attempted to behead Trump in effigy, and in the process beheaded her career in real-time.

The pattern is uncanny. Add to that list Trump other critics like the NFL and Starbucks. Also feeling “The Lindsey Vonn Effect” are Trump-hating rapper Eminem who is bleeding fans, and postmenopausal pop star Madonna whose album sales tanked after ranting on about blowing up the White House.

In politics, Trump detractors like Nancy Pelosi suddenly can’t express a coherent sentence. Senator John McCain (R-AZ) criticized the president and ended up also wearing a boot that matched Hillary’s. Even Arizona Republican “Jeff Flake(y)” got caught gossiping about Trump on an open mic. Also in the mix is the perpetually peeved Trump advisor Steve Bannon, who is no longer at Breitbart, and “reality show legend” Omarosa Manigault Newman. Soon after dissing the Trump White House in an attempt to boost ratings, the occupants of Celebrity Big Brother house evicted Omarosa.

Next up in the long list of “Lindsey Vonn Effected” Trump denigrators are the always- “inspirational” Obamas. Currently, Michelle and Barry are in late-stage negotiations with paid video streaming service, Netflix, to be paid big bucks to host an open forum where they can insult Trump in front of an audience of approximately 120-million paid customers worldwide.

One week after announcing the money discussions, Netflix fell victim to an Obama-induced “Lindsey Vonn Effect.” Seems Netflix stock, which had been steadily climbing, has been increasingly diminishing in price since subscribers heard the Obama’s were going to be paid to set up camp at Netflix. The announcement met with boycotts and subscription cancellations.

Last week Netflix stock was $331.44 a share. Then, after Netflix announced they would provide Trump-bashing Barack and his bitter Bride a soapbox to spread their signature, racism, gender identity politics, socialism and community activism the “stock dropped nearly 3% in value…down & 9.35.” In other words, “The Lindsey Vonn Effect” appears to be paying a visit to Netflix and very possibly depositing itself into Obama’s ever-swelling bank account.

In the end, the sowing and reaping occurrences are probably coincidental. However, as someone who neither skis, tours Lodi dynasty period resorts, appears on Netflix, nor hosts the Academy Awards, my best advice to those who do is to tamp down the Trump criticism lest “The Lindsey Vonn Effect” come knocking at your door.