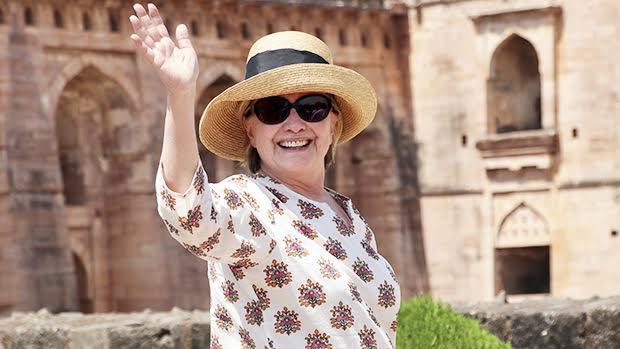 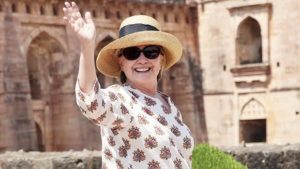 Recently, while visiting India’s ancient city of Mandu, in Madhya Pradesh, accident-prone tourist Hillary Clinton lost her footing and skidded down the stairs of 13th-century Jahaz Mahal.  It happened as Mrs. Clinton and an escort descended the stone stairs like the mother of a bride being ushered to the head table.

The former first lady’s unsuccessful effort to steady herself was remedied by a white male escort who likely convinced his wife to vote for Trump.

In any case, looking as if she had slipped on a banana peel, three quarters of the way down the staircase, the failed presidential candidate unintentionally headed into a yoga straddle split with one leg entirely in midair.

That’s when a second white male escort, wearing a matching straw hat, hurried to the side of the portly politician.  Attempting to help the men steer her carefully onto terra firma, Hillary kicked off her orthopedic sandals and tried to grip the stone with her gecko toes.

It’s horrible to say, but at 71 years old, Hillary should avoid sudden jerking motions, because lurching forward, backward, or side-to-side often results in incontinence issues for senior citizens with aging bladders.  So, after the stair incident, it’s not surprising that Miss Hillary thought it would be wise for everyone involved if she avoided the hot sun and instead slipped out of her white capris and soaked for a spell in a bath at the Umaid Bhawan Palace in Jodhpur.

Hillary, who broke her toe in London last year, has proven that elderly pear-shaped women do lose their balance, slip, and fall.

Hillary explained the London incident in the following way:

I was running down the stairs in heels with a cup of coffee in hand, I was talking over my shoulder and my heel caught and I fell backwards.  I tried to get up and it really hurt.  I’ve broken my toe.  I’ve received excellent care from your excellent health service.

Wait!  Hillary expects people to believe she was “running in heels with a cup of coffee talking over her shoulder”?  Furthermore, she also wants us to accept the excuse that gravity threw her onto the floor and she couldn’t get up because “it really hurt”?  Sorry, but a more believable explanation would have nothing to do with “coffee” being in that cup and more likely to do with a cantankerous drunk losing balance while yelling orders at her assistants.

Regardless, and despite the discomfort, the quintessential politician did manage to remember to use a broken toe moment to send a thumbs-up to Britain’s socialized health care system.

Regrettably, this year, that same thumb may be out of commission for a while. Lacking a thumb is unfortunate, because Hillary’s most recent crack-up provided the perfect opportunity for the patient to patronize Obamacare physicians of Indian descent back home in America.

Here’s what happened this time!

After a wind gust caused her to stumble on stone steps, and after nearly crashing into and killing half her team, the delicate damsel endeavored to scale the side of a large freestanding marble tub in her $1,300-a-night hotel room.  That’s when the woman who is turning into a bit of a sideshow slipped and injured the wrist she’s been using to wave to the peasants on the “What Happened” tour of India.

Collapse, contusions, concussions, and blood clots are everyday occurrences that Hillary attendants are used to handling.  That’s why, with all the marble and soapy water, if Hillary were to be knocked unconscious, Huma could handle it.  Hillary’s sidekick is so adept at medical emergencies that while texting Carlos Danger on her iPhone with her free hand, she could locate boss lady under a blanket of Mr. Bubble, drag her dead weight over the side of the tub, and administer CPR.

Hillary’s accident was eerily reminiscent of the late Whitney Houston’s untimely end.  Moreover, the bath episode is especially scary because just last week, Bollywood’s first female superstar, Sridevi Kapoor, tragically lost consciousness in the tub and accidentally drowned in a hotel room.  Luckily, America’s former first lady survived, but that injured wrist certainly put the kibosh on the plans she may have had to try out ankle bells, learn Bollywood dance moves, or guzzle Indian beer.

At first, the doctors who rushed to the palace diagnosed Queen Hillary with a sprain and wrapped the wrist in an Ace bandage.  Mrs. Clinton was advised to cancel plans to visit Mehrangarh Fort, to rest, and to follow up with a doctor in three days.

Despite the diagnosis, similar to what Americans experience whenever Hillary becomes verbally passionate about her right to tell us what to do, as the night wore on, the pain in Hillary’s wrist became unbearable.  As a result, helpers ferried Mrs. Clinton to a hospital at 5:00 A.M., where doctors took a C.T. scan and confirmed that the former first lady’s waving wrist was indeed fractured.

Either way, as of today, the public speaking leg of Hillary’s “What Happened” tour appears somewhat waylaid.

At least for a few days, Clinton will be unable to demonize President Trump publicly or blame her crushing defeat on racist, misogynist white males who coerced their docile white wives, meek mothers, subservient sisters, and compliant Caucasian co-workers into pulling the lever for Donald J. Trump.

God knows that with the way this expedition has gone thus far, the last thing Hillary needs is to strangle herself in cotton yarn on a rustic loom.  Even so, as part of the touring portion of her trip, Hillary may still do touristy things like watch carpet-weavers in bright turbans weave durry in Salawas village, “land of magic carpets.”  While she does, it appears Hillary has chosen to skip collecting signatures on the plaster cast she has hidden under a customized kurta.

Kurta or no kurta, doing damage to ancient structures, cracking marble tubs, and destroying foreign footpaths is a dreadful way for the “clumsiest woman in the world” to leave a memorable impression on India.