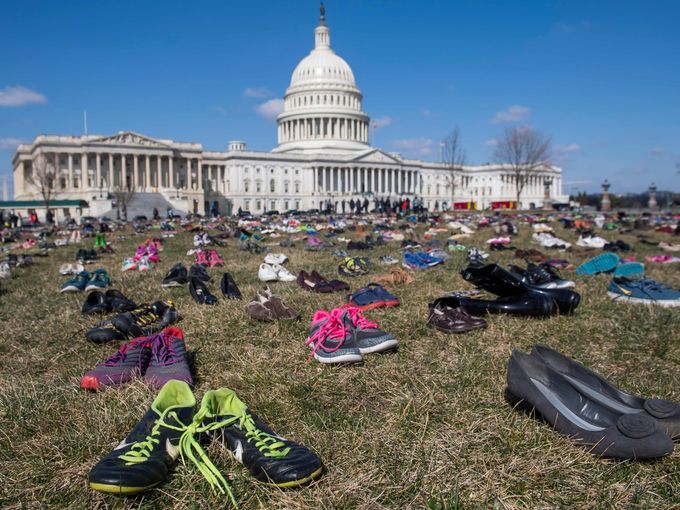 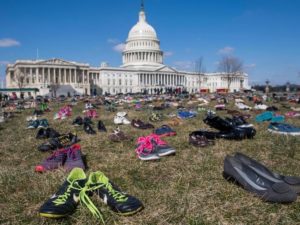 Avaaz describes itself as being “the world’s largest online activist community.” Founded in 2007 by New York-based Executive Director Ricken Patel, Avaaz sponsors worldwide politicking and does it by addressing issues leftists believe are important such as: “protecting the lungs of the planet” and “ending dog torture in Yulin.”

Of late, human rights have captured Avaaz’s attention, especially as those rights pertain to limiting the Second Amendment.  In other words, a group that prides itself on the “ethic of global interdependence” is now endeavoring to influence the future of the US Constitution.

Well aware of Saul Alinsky’s Radical Rule #5, which says “Ridicule is man’s most potent weapon,” Avaaz recently joined the gun control effort by bringing the “heartbreak of gun violence directly to Congress’ doorstep.”  Within hours of the shooting, the group somehow managed to be driving three ‘Outside Ebbing, Missouri’-style billboards around Senator Marco Rubio’s Florida office.  The billboards read, “Slaughtered in school,” “And still no gun control?” and “How come, Marco Rubio?”

Next up on the Avaaz agenda is to participate in the effort to shame lawmakers into submission via the March for Our Lives, which converges on Washington DC’s  Pennsylvania Avenue on March 24th.

In the run-up to that event,  just as they did in Paris on behalf of climate change, Avaaz has placed 7,000 pairs of empty shoes on the lawn of the US Capitol.  Avaaz says the shoes “represent the number of children who died because of gun violence.”

The problem with hauling all that footwear to the Capitol is that Time Magazine only “counted six adults and 35 children killed in [Parkland-type] school shootings” since 2013. The New York Times analysis of the Gun Violence Archive, “tallied 239 school shootings since 2014, including those on college campuses, resulting in 138 deaths.”

That’s why the Avaaz effort “memorializes the 7,000 children who have been killed by gun violence since the Sandy Hook school shooting” with roughly one shoe for every child the CDC claims died since December 2012.

If shoes without feet are the visual Avaaz feels makes the most lasting impression, there’s a more poignant message the human rights group should pursue.

Rather than the 14,000 shoes, on behalf of the 60-million unborn American babies eradicated since abortion was legalized in 1973, how about Avaaz switch from sneakers to baby booties?

Since Newtown, about 6.5 million American babies have been aborted, which means Avaaz could haul 13-million booties to Washington DC.  That’s 12,993,000 more booties than shoes.

What a powerful #NotOneMore visual statement it would make to place one set of knitted booties for each pair of tiny feet that were cruelly ripped from the womb by either a scalpel, suction hose, or saline.  Avaaz could memorialize the 3,000 lives lost per day and do it by switching focus from the Second Amendment to Roe v. Wade, from school shootings to dilation and evacuation, from AR-15s to suction catheters.

If Avaaz wants to stun the senses, why not place 120-million individual pink and blue booties in rows, each one belonging on the foot of sixty million lost children denied the right to life since 1973?

If the global community activists want to prove human rights are indeed a concern in America, rather than trolling Marco Rubio or saving fin whales from slaughter, charter activists could erect three blood-red billboards in front of the Library of Congress or the Lincoln Memorial.

What a powerful way to “close the gap between the world we have and the world most people everywhere want” than to speak for the voiceless who were: “Slaughtered in the womb.”  Or to challenge pro-choice politicians with questions like: “And still abortion on demand?” or “How long America, how long?”

And so, for every day those 7,000 pairs of empty shoes sit outside the US Capitol, inside abortion clinics all across America the silent screams of 3,000 babies cry out for someone – anyone – to memorialize their lives.