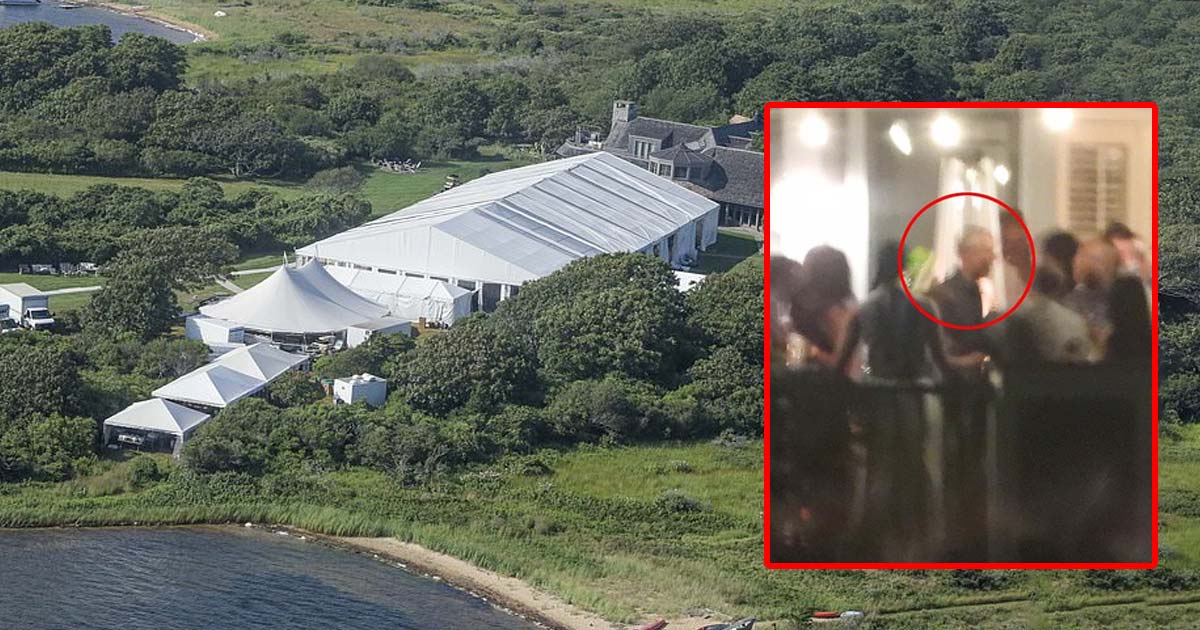 “Due to the new spread of the Delta variant over the past week, the President and Mrs. Obama have decided to significantly scale back the event to include only family and close friends,” Hannah Hankins, a spokeswoman for the former president, said in a statement Wednesday morning. “He’s appreciative of others sending their birthday wishes from afar and looks forward to seeing people soon.”

The Delta variant is not news. But the cascade of criticism the Obamas experienced is news.

As we all know, conceited, narcissist Barack Obama has never been one pass up an opportunity to be worshiped by fawning sycophants, especially if the worshipers are rich and famous.  That’s why, on August 7, the multi-millionaire/community organizer will host his own star-studded 60th birthday party.

According to a source at The Hill, “[i]t’s going to be big.”

The swanky gala will take place on the grounds of Obama’s 30-acre/$12,000,000 summer compound located on the waterfront in Edgartown.  Attending to the needs of A-list leftist race-baiters and politically correct sympathizers will be 200 ethnically diverse servants who will ensure the champagne flows and the hors d’oeuvres include racially sensitive cuisine.

Historically, aristocrats make merry while masked commoners struggle to breathe, subsist, and sustain a respectable lifestyle.  With 500 guests, 200 servers, and a hairdresser on site to style a Pearl Jam band member’s hair, Obama’s and Michelle’s haughty self-indulgence personifies the “rules for thee but not for me” mentality that is pervasive among a ruling class who parties while imposing despotic diktats on the peons.

As the unvaxxed attempt to elude needle-bearing pandemic police and children inhale CO2 through moldy Chinese-made masks, Steven Spielberg and Beyoncé look forward to enjoying a slice of a “let them eat” birthday cake topped with a fondant replica of Obama’s lifelong mentor, Saul Alinsky.

For those taking notes, it’s hard to deny that Obama hosting his own birthday bash exhibits more duplicity in the middle of a pandemic than Michelle wolfing down a 1,700-calorie meal at Shake Shack while preaching the gospel of beet juice to schoolchildren.

Brazenly defying the CDC’s guidelines by hosting 500 guests at a private party employing 200 servants while publicly endorsing COVID restrictions may even be more hypocritical than Obama golfing in Palm Springs, on a well watered California golf course, during a drought.  Or on par with Michelle, before taking another $4-million vacation, encouraging America to “give up a piece of their pie so that someone else can have more.”

Unfazed by the delta variant or media criticism, thus far, rain or shine, the Obamas have not indicated that they plan to postpone the affair.  Meanwhile, Obama spokespersons assure detractors that the former first family earned their right to party by clocking hard time in solitary confinement at their waterfront property.

Thankfully, to date, the Vineyard enclave does not qualify as an area threatening “high” or “substantial” COVID risk.  Even still, Governor Charlie Barker feels that, in light of all the breakthrough cases in Massachusetts, vaccinated people should wear masks, a practice Obama has never opposed, especially when enjoying himself at private parties.

Francis Collins, the National Institutes of Health director, warned that those who don’t want to be infected by mask off/mask on Fauci’s NIH-funded gain-of-function bioweapon should avoid large gatherings.  Collins, who recommended vaccinated parents wear face masks indoors to protect children, also said, “If you’re talking about a small party like I might have at my house for six or eight people who are all fully vaccinated, I do not believe, at this point, we need to put masks on to be next to each other.”

Collins cautioned, “If there were 100 people … how are you really going to be sure about people’s vaccination status?”

Dr. Collins has a point.  Suppose the Obama guest list is a sample of the U.S. population, where only 57% have complied with the double-jab edict.  That would mean there’s the potential for 215 partygoers to show up in Cape Cod without a government-issued Band-Aid on their arm.

With that in mind, to project damage control, a “COVID coordinator,” tasked with infiltrating George and Amal Clooney’s nasal cavities, will be on site to ensure that guests comply with virus protocol.  As for pool time, safeguards will be in place to make sure naked exhibitionists Chrissy Teigen and John Legend don’t contaminate the Obama Petri dish with questionable bacteria.

Sneezing, coughing, and swallowing dubious pool water be damned, especially when the perfect vehicle to boost one’s ego is to be among the chosen few summoned to Martha’s Vineyard to bolster Obama’s insatiable ego.  To be safe, maybe the newly minted sexagenarian should hand out brightly colored party swag stuffed with ivermectin, zinc, and hydroxychloroquine.

Meanwhile, to play down mutual ego-stroking and precarious exposure to viral pathogens, word on the street is that to deflect criticism, unlike the eight-year Obama White House grift-fest, the poorly timed shindig will be financed solely with Obama’s filthy lucre.  Then, to further cement 44’s altruistic image, Axios reported that guests were asked to forgo birthday presents and instead “consider giving to programs that work to support boys and young men of color … empower adolescent girls around the world, and equip the next generation of emerging community leaders[.]”

Did Barack “My Brother’s Keeper” Obama actually ask guests to support charities that his three-million-dollar birthday fund could singlehandedly endow with more money than disadvantaged youth could earn in a lifetime?  By requesting donations for needy children at a birthday extravaganza attended by billionaires — Obama’s 60th could easily be likened to Michelle bagging groceries at a food bank wearing $540 sneakers.

In the end, for elites eager to use Barry’s 60th birthday as an excuse to spend the day idolizing their hero, exposure to the delta variant is a small price to pay for the honor of owning a T-shirt that reads, “I survived Barack Obama’s super-spreader.”