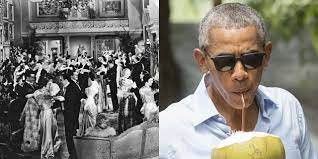 As word got out that 700+ COVID super-shedders were adjusting party hats in preparation for the “44-at-60” ass-kissing-fest on Martha’s Vineyard, to quiet critics, Obama announced he was “scaling back” the Obamapalooza to include just “close family and friends.”

For regular folks like you and me, the words “close family and friends,” usually means Grandma, the kids, and a boxed Duncan Hines birthday cake.

But not for Shelley and Barry.  As seaplanes full of victims of institutional and structural racism descended on Martha’s Vineyard, “scaled back” became the most disingenuous parsing of words since “It depends on what the meaning of the word ‘is’ is.”

In fairness to Obama, considering his ingrained tendency to fabricate, maybe to him, “scaled down” meant 499 guests, instead of 500, and 199 non-English-speaking servers in place of 200.

Based on Psaki’s explanation, it sounds as if Obama believes that vocal support of mRNA gene therapy doubles as COVID protection at large gatherings.  And, if good intentions have credibility, someone should inform Fauci the Infallible, because based on his recent PSA updates, after the sexagenarian super-shedder is over, Springsteen and Spielberg have the potential to infect all of New Jersey and the Hamptons.

From the looks of aerial photographs, apart from resembling a viral biodome, everybody who’s anybody in the Alinsky circle of government community organizers was there.  The honed down list included racially oppressed guests and Marxist/communist sympathizers that would make Lenin, Stalin, and Hitler’s upper echelon proud and may be why Obama’s Jewish neighbor, comedian Larry David, was treated like Netanyahu.

Unfortunately, the former president’s deceased “typical white grandmother,” brother Malik, COVID-spooked Oprah, and senile Uncle Joe did not show up at the gala.  As a result, party planning focused primarily on “close friends” like Tom and Rita Hanks and narcissistic bully/attention whore Chrissy Teigen.  Chrissy’s fondest Obama memory is having sex in the bathroom at a DNC “Obama thing.”  Attending the party with Chrissy are her Instagram-weary kids and whipped-into-a-cream-puff husband, John Legend.

Billionaire Jay-Z, Queen Beyoncé, and Don Cheadle, all institutional and structural racism victims, attended the “small affair.”  Como, Italy lake house–owners and taxi boat fans George and Amal Clooney jet-setted in, as did environmentalist John Kerry, who touched down in a private jet.

To accommodate the distinct tastes of such a diverse group of billionaires, in place of pansies, for this “intimate” affair, purple sweet peas, cream rhododendrons, and large circular light fixtures dazzled the Obama Tent of Meeting.  The purple sweet peas likely symbolized Obama’s love of all things androgynous and, for lack of a rainbow theme, placated the LGBTxyz guests.

Additional, well thought out details included a stage and high-tech accessories set up to ensure that if photoshopped pictures of Obama’s birth in Hawaii showed up in the lineup, the spiritual experience would be rivaled only by a retreat weekend, attending to newborns at Bohemian Grove.

According to Bloomberg News, the bash’s meat-free menu was reportedly “curated” by musician Questlove.  In homage to the former FLOTUS’s school lunch program, feeding stations offered “Spam Musubi made with plant-based faux-beef and faux-pork and Eat Just’s plant-based eggs … [and] Cheesesteak Eggrolls made with Impossible ‘beef’ and ‘cheese sauce,’ from Perfect Day Inc.”

In addition, to honor Barack Hussein Obama’s deeply revered Middle Eastern heritage, Martha’s Vineyard’s Nancy’s Restaurant catered a portion of the affair.  The restaurant Nancy is not the same as the mask-free Nancy who suggested arresting House of Representatives members for following her example.

This Nancy, famous for heavily influenced Middle Eastern cuisine, provided gyro plates, grape leaves, and falafels.  As for Valerie Jarrett and Hillary Clinton, both of whom prefer to slurp raw oysters and suck on giant squid, “oyster shuckers provide[d] the best of the cape’s fresh shellfish.”

Last but not least, in keeping with the Obama’s “do as I say, not as I do,” tradition, to safeguard gun control advocates and Second Amendment detractors, a new, red area was added to a blue zone:

extending the no-fly zone… centered over the Obama property. Drones that stray into a blue zone will be prompted and their flight limited by default. Any drone flying in a red zone — the highest level of restriction — can be commandeered and brought down over land or sea.

For “we the little people,” the words “scaled back” do not mean hundreds of unmasked billionaire superstars flashing useless vaccine passports.  Nor does it mean suppressing public criticism by paying a COVID coordinator to oversee the splattering of infectious sweat droplets on a temporary dance floor.

But Barack Obama defines things differently.  In Obama’s mind, the uninvited peons who drink from a separate economic water fountain are without a clue when recognizing the clever parsing of words.  Therefore, if condemned for hypocrisy and lying, Obama can always fall back on the time-tested excuse that “it depends on what the meaning of the words ‘scaled back’ and ‘close’ are.”  For Obama, economic and racial segregation is acceptable if it means Eddie Vedder gets to lead a well moneyed congregation in a worshipful serenade to his greatness.

As the “s— show” of SUVs left the party, once again, the pontificating charlatan managed to situate himself at the top of the heap of self-serving elite frauds who make merry with abandon while exploiting a virus that controls anyone other than those on Obama’s guest list.