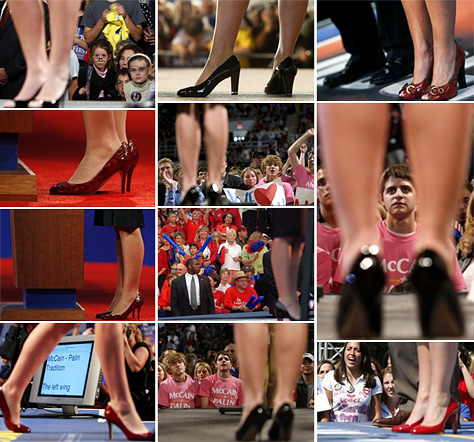 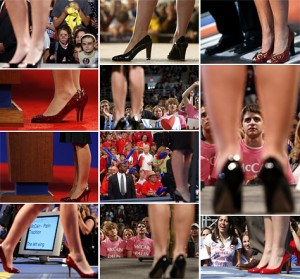 Does anyone recall the relentless, persistent flogging Sarah Palin received for a $150,000.00 wardrobe purchased for her to wear on the campaign trail by the Republican Party? Her intolerable extravagance is 0.009% the cost of Michelle and Barry’s bash next Tuesday and not a whimper of criticism from the left? Where is the New York Slimes, whose reporters were obsessively fixated on the price of Sarah’s Naughty Monkey Heels?

Life & Style image consultant Michael Sands said, “Sarah became Cinderella, and the fairy godmother was the Republican Party. If she had stayed in her own clothes…she would have had far more impact.” Conservative columnist Mona Charen made the point at that time the controversy was flaring, in National Review Online, that the Democrats weren’t exactly dressing down: Barack Obama’s suits go for $1500 and that Michele wears designer duds all the time (except when appearing on The View when she boasted of wearing an under $200 dress). Sarah who was bullied and bruised repeatedly assured the American public, “…at the end of the campaign, they’ll be donated to charity.” Who can forget Diane Sawyer’s disapproving eyebrow furrow when discussing Sarah’s Sergio Rossi, red pumps? My question is will Michelle be donating the clothes from the Inaugural to Prom Spot? When Bush had a barbecue for his Inauguration he was excoriated…why isn’t anyone questioning the sea scallops and the pheasant on the menu for next Tuesday’s post-swearing in luncheon?

What Mona and other conservative commentators obviously don’t understand is that as far as the left is concerned conservatives deserve to be dressed in penitentiary attire replete with vertical stripes eating offal and liberals deserve the best that money can buy. I am also interested to know why the money that those evil corporations are spending to have private Inaugural celebrations next Tuesday like the $40,000 donated by American Airlines to a January 19 ball sponsored by the Illinois State Society or that evil Chicago-based utility Exelon donating $80,000 to the Illinois ball and a separate gala for Pennsylvania power brokers is not being criticized in the least? To the left, this is evil corporate money well spent.

These hypocrites wouldn’t tolerate a political party investing $150,000.00, of their own money, on a wardrobe for their candidate. Moreover, they have no problem spending exorbitant amounts of cash on a one-day swanky “Aren’t I Wonderful Gala” without restraint or sensitivity to the needs of the gullible proletariat that got them elected in the first place. Those champions of fairness and even handed, unbiased journalism have no problem with a 160 million coming out party and are willing to spend any amount without limit to celebrate victory? The only problem is their victory party expense account contradicts the tenants they were elected upon. Wasn’t Barry the one who stoically instructed us that we’d all, “…have to sacrifice for the common good?” The price of his “I’ve Made History Party” gives new meaning to a word he loves so to freely toss around with wild abandon, “entitlement”.

I’m sure the designer dress Michelle will wear to the Inaugural Ball will have a price tag that will rival the amount of Sarah’s full campaign, then expediently donated to charity, wardrobe. In Michelle’s case each and every one of those dazzling sequence represent an individual campaign dollar of people who might presently be in foreclosure. Get used to it people, less money in your pay check means a closet full of Jimmy Choo’s for Michelle. Don’t have a job, can’t pay your mortgage? No problem let the caviar & Courvoisier® Cognac, flow it’s party time at the top of the socialist social structure!

Now I have to clarify here, I wouldn’t care if Obama’s Inauguration cost 500 million dollars, I’m serious. I had no problem when Ronald and Nancy had their elegant event complete with Frank Sinatra crooning while they slow danced. Spend as much as you want. My temper is riled by out and out unbridled double standards and hypocrisy run amok. This is just another example of liberals doing something, which is categorically, disproportionately worse than what they spent the last year criticizing conservatives for, and they do it with unabashed personal aplomb and receive zero criticism from the same piranhas’ who criticized George W. Bush in 2005 for hosting a picnic during a war.

Four years ago, the Associated Press and others in the press suggested it was in poor taste for Republicans to spend $40 million on President Bush’s Inauguration. AP writer Will Lester calculated the impact that kind of money would have on armoring Humvees in Iraq, helping victims of the tsunami, or paying down the deficit. Lester thought the party should be canceled: “The questions have come from Bush supporters and opponents: Do we need to spend this money on what seems so extravagant?” Fast forward to 2009. (AP Slammed Bush’s ‘Extravagant’ Inaugural in ’05, But Now It’s Spend, Baby, Spend) http://newsbusters.org/ blogs/rich-noyes/ 2009/ 01/ 14/2009.

It would serve our new President well to set an example of the “…personal sacrifice” he is purporting we as a nation adopt as our mantra for the next four to eight years. He could begin by really making history and heeding the advice of Albert Einstein when he said, “Setting an example is not the main means of influencing others; it is the only means.” Barry could accomplish that goal by returning to the Inauguration Day policies of Presidents like Warren G. Harding. In 1921 Harding requested that the Inaugural committee do away with the elaborate ball and parade as well, in hopes of setting an example of thrift and simplicity. Subsequent Inaugurations followed this trend, with charity balls becoming the fashion for the Inaugurations of Calvin Coolidge, Herbert Hoover, and Franklin D. Roosevelt now that would be a “Change” we could believe in but I trust won’t be realized.