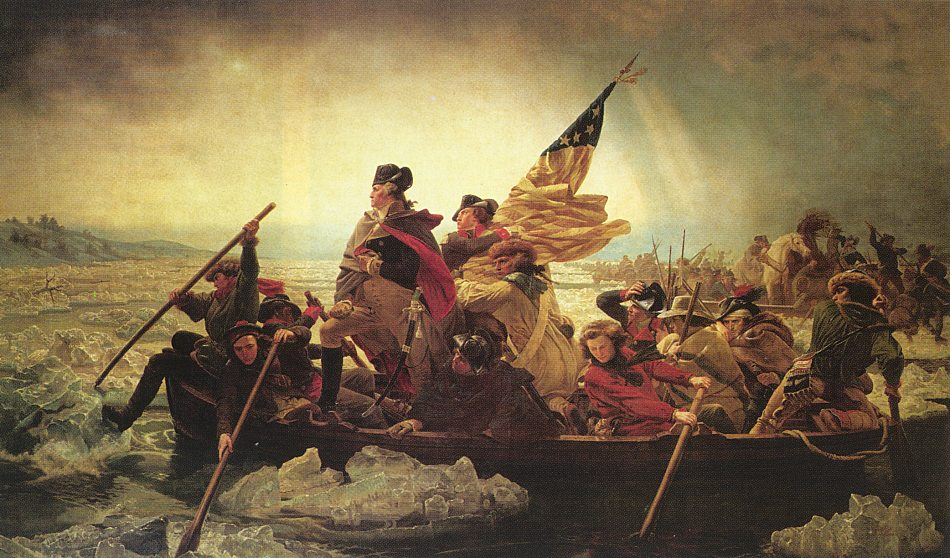 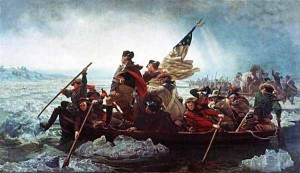 History tells us that General George Washington, the Father of our nation, was famous for leading his troops instead of issuing orders from a perch of safety. In 1776 the situation was ominous and was a calamitous time for General Washington and the American Revolution. When all seemed like it was lost, Washington made a decision to attack the British in Trenton and “… led his troops across the ice-swollen Delaware”. The weather made the situation so grim that they crossed the river under almost unimaginable conditions. However, George Washington continued to lead and remained out in front of his troops, in spite of wind, snow, sleet and rain as a result of his defense and example a large number of Washington’s men followed their leader through the snow, without shoes!

One of the basic principles of leadership is to set an example by being a role model for the people you are leading. Leadership isn’t about talking and instructing but instead about living what you say. The only way to get people to follow is to become the “Change” we want to see in them. Think of great leaders who have influenced the world. Mahatma Gandhi for one became the epitome of non-violent protest he, his life and his actions were the example of the total embodiment of a message. He said, “Happiness is when what you think, what you say and what you do are in harmony”, which is precisely the point. Would anyone have followed him if after hearing him speak they caught him throwing stones at his enemies?

How about William Wallace and his famous speech heartening the sons of Scotland to be willing to die for freedom? After inspiring them to go forth and confront a mammoth English army, led by the brutal King Edward I who raped, murdered and tortured his country and kin for years, he picked up his sword and charged into battle himself. Wallace fought to the death, always an exemplar of freedom and never compromising his message in a cheap or frivolous way.

“In the course of our history, only a handful of generations have been asked to confront challenges as serious as the ones we face right now. Our nation is at war. Our economy is in crisis.”

“But never forget that the true character of our nation is revealed not during times of comfort and ease, but by the right we do when the moment is hard.

“I ask you to help reveal that character once more, and together, we can carry forward as one nation, and one people, the legacy of our forefathers that we celebrate today.”

These are the inspiring words of Barack Obama spoken prior to a star-studded rock concert two days before his inaugural, a 170 million dollar event that was the most expensive ever held in the history of our nation, which was held, not coincidentally during what Obama himself called, “…the worst financial crisis since the Great Depression.” He also acknowledged in this same speech that he was sensitive to the fact that many Americans were, “…worried about their jobs, pensions and retirement accounts” (Reuters, Obama: U.S. in worst crisis since Depression, October 7, 2008).

On January 20th the man who exhorted Americans to new heights all through the campaign season officially moved into the White House.

Speaking of the White House, designer Michael S. Smith has been given the job of redesigning the President’s home for Barack Obama and family.

“Just because we can, doesn’t mean we should”, especially when we’re trying to lead. If what our nation is experiencing is such a serious challenge isn’t it time for Obama to advance to the bough of the boat as it cuts through the economic ice of a river of hardship? If not, than those of us he’s expecting to walk in the snow barefoot should just find a warm, dry fire to defrost beside because the inspiration to endure isn’t there.

If we are truly in a winding, windy storm, lofty speeches cannot be heard over the whistling of the howling wind. We move forward with our heads down, faces frost bitten numb, ice crystals cling to our eyelashes and our lips parched and cracked. We slog in a direction that is being supposedly forged by one who claims to know the way. When we feel like we can’t take another step, we need to look up and see someone in front of us showing us that it can be done and to persevere onward.

We presently have a new President who is asking us to, “…together…carry forward as one nation, and one people the legacy of our forefathers”, the principal word being “together”.   The definition of together is; in or into a single group, mass, or place, in association with or in relationship to one another; mutually or reciprocally, by joint or cooperative effort, regarded collectively.  Isn’t Obama the one who preaches in favor of collectivism and against individualism?  “In America,” Obama says, “we have this strong bias toward individual action. You know, we idolize the John Wayne hero who comes in to correct things with both guns blazing. But individual actions, individual dreams, are not sufficient. We must unite in collective action, build collective institutions and organizations.”   The President mocks individualism and then separates himself from the pack living by an individual set of rules quite different from what he espouses to the masses, enthroning himself as a political elite.

When Chief executives from General Motors Corp, Ford Motor Co, and Chrysler LLC asked for $25 billion in federal assistance to bail out their indebtedness to suppliers, workers and to cover other expenses, it was not prudent for them to fly to Washington DC in private jets. Skeptical, “…lawmakers blasted them for flying private jets to Washington and failing to make personal sacrifices in exchange for federal assistance” (Reuters, Auto execs’ private flights to Washington draw ire, Wutkowski, 11/19/08). Congressman Gary Ackerman a Democrat from New York shared an analogy that these executives, arriving in private jets was like “…a guy showing up at a soup kitchen in a high hat and tuxedo” (Reuters, Wutkowski).

Gary Ackerman should have a chat with the President about soup kitchens and top hats. Obama is the one that scolded us saying, “We can’t drive our SUVs and eat as much as we want and keep our homes on 72 degrees…” Then like that soup kitchen attendee in a top-hat, he flew on Air Force One to a Valentine’s date, feasted on decadent southern fare such as pan-seared catfish, low-country shrimp with stone-ground grits and buttermilk fried chicken followed by red velvet cake at tony, up-scale restaurant Table 52. In addition, “It’s perpetual summer in the Oval Office… after he called on Americans to protect the environment and turn down their thermostats” Like George Washington’s soldiers “… the rest of the country has been trudging through a tough winter. Ice storms have cut power to millions in the Midwest and South” and instead of being in the row boat goading us on by example, our “leader” keeps his office warm enough to grow orchids! (Fox News, Obama Getting Heat for Turning Up the Oval Office Thermostat, Feb 3/2009).

First Lady, Michelle Obama has also come out with some startling edicts that don’t seem to align with her own personal life choices. “The truth is, in order to get things like universal health care and a revamped education system, then someone is going to have to give up a piece of their pie so that someone else can have more.” This is the same person who passed on the pie and went straight for the “Love Straight from the Oven” at Table-52, which serves the Smith Family Twelve-Layer Chocolate Cake. I hope Mrs. Obama isn’t giving the little people the message, “Qu ‘ils mangent de la brioche” while she eagerly savors Art Smith, Oprah’s ex-chef’s, Hummingbird Cake.

Elisha Bostwick was a soldier in the Continental Army, who trudged through the snow following General George Washington who led encouraging all the soldiers to “keep by their officers” — when Elisha looked up from his solid, icy, numb feet “his Excellency” went before him. When the American people look up from our ice-covered steps to find a leader, he just isn’t there. Where is he? Why–he’s taken the weekend off to jet home to Chicago on Valentine’s Day weekend, in Air Force One. “Arriving at O’Hare airport Obama, his aides and press corps get into Marine helicopters and clip through downtown Chicago and land at a park on Lake Michigan…” (Huffington Post, Love and hoops topped the agenda for President Barack Obama this weekend, 2/13//09).

As a leader, part of the job is to inspire people, not with props like Greek columns, not with reverb and fog machines, not with supercilious speeches that exalt you above the common folk in style and image. To inspire people you must show them the way by going before them, making a way, cutting the way through the brush, by doing it yourself. You can’t tell people what to drive, fly, and eat and how to heat and then do the opposite from what you’ve suggested to those you’re supposed to be leading.

You can’t criticize past Presidential administrations for running up the deficit and then pass the biggest deficit buster in the history of our nation, “The “stimulus” bill alone will create more debt (approximately $1 trillion including interest costs), than Bush’s first three years of budget deficits combined ($948 billion). And adding the “stimulus” bill to a realistic budget baseline yields a projected 2010-2017 cumulative budget deficit of $8.4 trillion– 2.5 times the size of President Bush’s deficits over the same 8-year time period” (Heritage Foundation, President Obama Set to Exceed President Bush’s Deficits,   Feb. 11, 2009).

You can’t compare yourself to Abraham Lincoln any chance you get. You shouldn’t ride into Washington on the Lincoln express, swear the Presidential oath on Honest Abe’s worn out Bible and then enslave a whole nation and the generations that follow with a tax burden so heavy that the government, which should be protecting our individual freedoms has now become our corporate task master.

You can’t promote green jobs and energy efficiency while, “…the sanctum sanctorum of executive power, Obama has kept it steamy – literally. The entire White House complex is heated by steam radiators, part of an old energy system…Critics say it’s time for the president to put his coat—or his cardigan – back on” (Fox News, Obama Getting Heat for Turning Up the Oval Office Thermostat, Feb 3/2009).

You can’t expect the underlings to walk barefoot through the snow like the faithful foot soldiers that followed the Father of our Nation across an icy river, while you’re cozily fitted with a pair of moose hide Mukluks, 100% silk/wool blend  socks and ride in a leather interior, heavily armored, Cadillac luxury limousine.