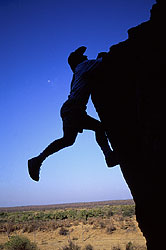 What actually happened with AIG?  In layman’s terms here it is.  AIG was hanging over a cliff with their bloody, ragged fingernails ripping into shifting rock and gravel.  Obama cleverly disguised as Geitner, a.k.a. Geit-n-bama , knelt down, leaned over the precipice and sinisterly whispered to AIG that he alone could save them from splattering on the rocks.  AIG reached out and Timothy G. Obama grabbed their sweaty hand.  By benevolently hoisting them from danger he was officially branding them one of his bond servants. Feet on terra-firma AIG brushed off the dust and glanced back over the ledge at the long fall they’d been spared.  Getting their bearings and catching their breath, they failed to recognize that Barry was undercover.

Obama hoped to set-up a susceptible AIG by exasperating their inherent flaws and misconduct.  The plan being, bank political capital and policy advancement on the back of AIG’s infamous “greed.” AIG was a perfect contender for government approved entrapment.  Masquerading as Geitner, Geit-n-bama beckoned AIG Executives into an economic bailout treaty by offering them an opportunity to save themselves from total destruction.  Shaking hands over the deal with one hand, incognito Treasury Secretary Obama slipped “bonus contraband” into AIG’s pocket with the other hand.  And then, with a wink and a nod, proceeded to call the FBI and report them.  AIG should have had the wherewithal to check their pockets before signing the contract.

The government threw AIG a lifeline, reeled them in and then soothed them into submission with bailouts and bonus addendums, while lying in wait for the kill.   The ultimate goal being to demonize, control and socialize “by any means necessary.” Who better than a susceptible financial institution like AIG to throw to the wolves and to then stand back while they were devoured in order to portray the prey as the wolf and then have public permission to shoot the prey?

The people patrol was summoned by the media to the scene in hopes of fully exposing the offender.   Finding out that AIG was getting a bailout, which included left pocket “bonus contraband”, the equality squad proceeded to capture, detain and prepare to finish AIG off in the village square. Obama, cloaked as Geitner, stood by and did nothing, knowing full well that he was the perpetrator who placed the “bonus contraband” into their possession in the first place.   His silence and lack of intervention incited executives to be sprayed with mace, gagged and dragged by their hair through the streets.  By ensnaring AIG, Timmy O sowed seeds of ruin hoping that a thorny harvest could enmesh other financial institutions in a web of regulation and control.  His grand scheme to federalize all aspects of the private sector and socialize an envious, naïve nation had been successfully initiated by a bailout-bonus-bait ruse.

Geit-n-bama seized on an opportunity to rent a big, yellow bus and cram it with malcontents.  He spent months indoctrinating them in ACORN style class warfare, espousing, “Spreading the wealth,” the evils of capitalism and the injustice and inequity of some having more than others.  All with cult-like repetition and rhetoric.  He circulated newly minted $100 dollar bills and let his student-passengers get an intoxicating whiff, repeatedly calling attention to the failed AIG greed monger’s stacks of cash.  He targeted AIG as the culprit that was responsible for all personal hardships and portrayed bonus recipients as equivalent to child-molesters.

He then dismissed the nabobs of envy to mete out justice on an already handicapped AIG in any way they saw fit.  In response to this perfect plan, played out by the ultimate political pirate, the crowd continued their haranguing tirade against AIG. Waiting for the effect to be fully implemented, Geit-n-bama waited in the bus eating PBJ sandwiches, filing his fingernails and chewing bubble gum, while tapping his feet and humming along to a shuffled playlist on his IPOD Nano.

White flags in hand the criminals, slowly emptied their pockets of bonus money, which was indelibly marked with the ink of entrapment.  AIG bonus recipients capitulated; distributing the currency they were hoodwinked into believing was theirs.   The incensed crowd hungrily scooped and stashed the booty into their pockets.  Sitting somewhere counting the spoils they seized from AIG this deceived assemblage of plebes falsely convinced themselves that they would get to keep the profits someone else had earned, forgetting that the ill-gotten gain could still be ineradicably tracked by embedded socialist sonar.

With the backdrop of overwhelming grassroots support behind him the next stop is Capitol Hill where Geit-n-bama plans to use his trusty urgency megaphone to stress how staggering, chaotic; and unjust incidents take place at most financial institutions.  His intent is to underscore AIG’s mishandling of bailout funds as a symptom of a more pervasive problem that must be swiftly addressed.  He plans to advise Congress as to why AIG is proof that he deserves expanded power to seize banks.

Timothy Geit-n-bama plans  to warn legislators that our whole private sector, starting with financial institutions, are dangling off an overhang ready to hit the rocks just as AIG was when he “saved” them.   His intent is to entreat the nation, convincing citizens and law makers alike, that he alone can prevent the impending  economic avalanche through a governmental cliff-hanging power-grab…redeeming  us all in the process.

Geit-n-bama has provided an excellent opportunity for American citizens to recognize and reject his green-with-envy-lucre power-play.  There is still time to do what AIG failed to do, which is to scrutinize our own pockets.  History, coupled with adept socialist slight-of-hand should be our tip off.  The Geit-n-bama would not have neglected to tuck away an illegal decoy on all the passengers disembarking his populist bus tour, investing much needed leverage for when it’s our turn to pay up!