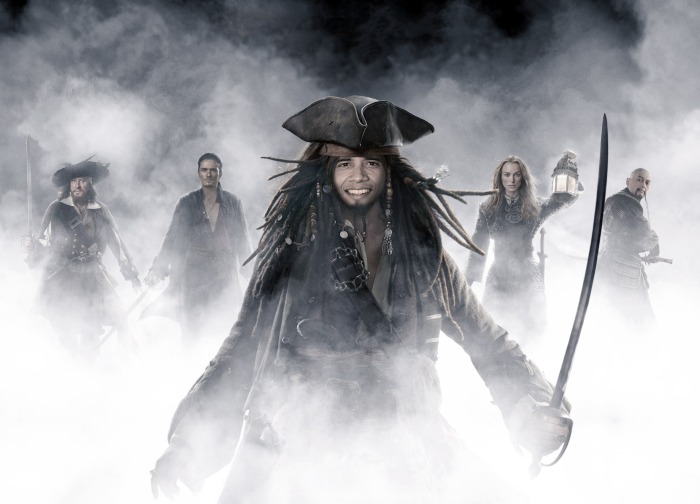 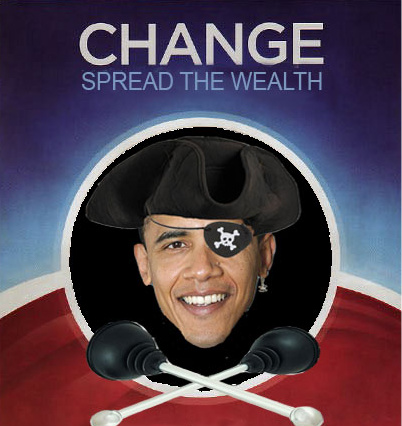 On Inauguration Day, the crowd jamming the National Mall, to witness the historic institution of Barack Obama as the 44th, President of the United States, was referred to in the press as “…a sea of humanity, almost too many to count, too many to see, stretched out from the Capitol beyond the Washington Monument.” An old Greek proverb says, “Where there is a sea there are pirates.”

With all the talk of Somalian piracy and the taking of an American vessel off the Horn of Africa pirates are a current topic of interest. While many people are focused on the boarding of an American tanker by a group of Muslim, Somali terrorists with AK-47’s, gold teeth, immense chutzpah and exorbitant ransom demands what should also be a focus is the band of political pirates that are ransacking the political landscape of this nation.

Just as pirates are boarding tankers and commercial ships with grappling hooks, so too has the grappling hook of rhetoric and the weapon of bamboozling manipulation being used to convince Americans to hand over their treasure chests and their booty. The American public wondered why the President’s only statement on the subject of terrorist piracy antics was a, “Arrrrrrrrrgh” followed up by a, “Guys, we`re talkin’ housin’ starboard now.“ Could his hesitancy to address the mercenary issue be because pirates are his political soul mates?

Somalian pirates are the type of group Barry shows all his compassion and understanding for. The poverty that countries like Somalia are experiencing have got to be explained by a politician of Obama’s ilk as the result of a renegade “free market” the culprit of global woes. Pirates can’t be blamed, they are innocent victims of an anarchist situation induced by evil greed and lack of government control.

A swashbuckling pirate of fairness has been long overdue and here he is! Obama is of the persuasion that has a moral obligation to “spread the wealth around” taking from those who have more, and giving to those who have less. He is sort of a pirate himself. A hero of equality, someone whose conscience is clear because the evil rich deserve to be plundered, having robbed everyone for way too long.

On Election Day, our nation may not have realized it but willingly walked the gang-plank, ignorantly electing our very own brigand to the White House. This blagueur may not have a patch over his eye, a hook for a hand or a peg leg but he sure knows how to maneuver over the rough seas of humanity. He and his drunken group of coxswains are out there trawling the policy oceans threatening our treasure chest of capitalism, freedom and free market trade.

One-by-one, the Pirate-in-Chief , has been pursuing and sopping up what he perceives to be the burdened vessels of banking, housing and the auto industry. On even keel with the horizon this want to be Captain Hook sees big health care and pharmaceutical crafts as the next addition to his treasure trove of power. Tooting away in the waters Captain O is busy loading political AK-47’s, putting together his motley crew of picaroons and instructing the helmsman where to take the ship, boxhauling over any opposition along the way.

The open seas have always had ships laden with various types of goods. Just as a real pirate would sneak up alongside of the vessel, trolling for booty, so too has Captain Obama. He stands in the crows-nest peering through his spy-glass out over the political seascape scoping out what direction he needs to go to repossess property and hard earned treasure. Snorting and spitting his message to the citizens of a free nation that he is the one to bring change saying things like, “The country nay as ’tis but as ‘t ortin’ ta be.” He tosses gold dubloons, in the form of faux-tax breaks to the crowd to buy their affection while he schemes his next act of political piracy.

Business, banking, industry and pretty soon pharmaceuticals and health care are the tankers Captain Obama has either partially taken over, is planning to sink or has his eye on for the future. These vessels manned by Gentleman of Fortune have vulnerable crews napping on the watch. In the political high seas where Obama and his swashbuckling red beards hang out, the vessels that represent our freedoms are just waiting to be plucked from the waters and routed for goods.

The one who makes the decision about the target vessel and the treasure to take is none other than Captain Obama Master of the high seas. This outlaw is brazenly and haughtily attacking the foundation of America and all the things he despises, enterprises he feels ultimately should be owned and controlled by him. His grommets gleefully desire to administer the devil’s jig to our democratic republic. Has anyone noticed…no own is stopping them?

Operating without opposition, this Captain is crafty. He distributed to the land lubbers before shoving off to sea, large doses of lubbers wort in the form of promises and smooth rhetoric. Laziness and stupidity have taken root in the people. Instead of fighting the piracy the sedated are standing on the land, cheering him on. Our citizenry has become much like a horde of Somali women who seek to marry the hero pirates.

America is now an enamored population married to policies they don’t understand because they believe that it will monetarily or economically benefit them. Americans are being hornswoggled by the master of deception and forgetting that the treasure on the ship’s being raided is their own property. Instead of fighting for what is rightfully theirs Americans are freely giving it over to a band of thugs. When America has lost full control of prosperity, freedom, rights and the work of their hands the pirate ship may be so far from sight that their fortune may be forever gone.

Since January 20th a nation has willingly let a political pirate usher it below deck, put us it in chains, and force its people row to the next conquest of his choice.

It is time that the routing stops and the privateers put together a Letter of Marque where private business, ventures and citizens decide to “…rig and outfit our vessel as we see fit for the purpose of waging punitive acts against our freedoms and future.” Are we going to have a bilge rat like Rahm Emmanuel have the Captain’s ear and instruct him how to dictate his piracy tactics? Maybe it’s time to rise up as a crew against the aggression of a wily pirate. It’s time to batten down the hatches and decide whether we’re going to be governed by bandits or remain a nation whose people are free.

This nation is being held for ransom by the piracy of our very own Black Barry(Bart) Roberts and the federal government. Americans are the ones that need to address the problem of political piracy by recognizing it for what it is and deciding it’s time for it to end in much the same way as the Navy put an end to the Somalian pirate standoff. Maybe we need to fire up our democratic chase-guns and slow down the progress of King Barry’s Revenge ship with his blatant Jolly “Anti-American” Rogers, flapping in the wind.

There is presently a following breeze in the nation whose wind can help to push us our galleon toward a good landfall if we decide to go with it. If we continue to sleep below deck we’re headed for a very bad landfall that we may never be able to recover from. Americans must not be spooked by the banking and auto industry hanging in the governmental gibbet. If they do everything that made this nation great will be ravaged by dictatorial political pirates whose pillage we will never be free from…time for a lawful mutiny. Let’s dump some tea overboard, take a stand and place Obama and his crew in the quarantine quarters of the lazaretto.