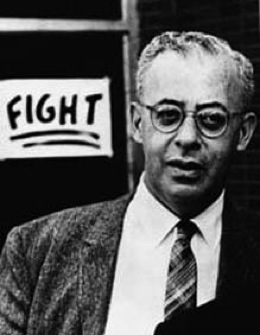 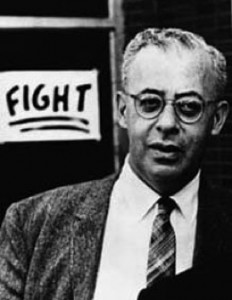 The dragging manacles scrapping along the halls of power belong to the ghost of Saul Alinsky. He is the phantom influencing the tenor of the politics insuring that left-wing policies are implemented, unobstructed by dissension. Alinsky taught his mentee well and now Barry is able to apply the principles of Rules for Radicals to every person or group who disagrees with him in any venue of governance.

The President is a textbook narcissist. He presents himself as being secure and having high self-esteem but instead has crossed the “border of healthy confidence into thinking so highly of himself that he has put himself on a pedestal.” Obama’s deluded impression of himself causes an inability to handle criticism or disagreement. Narcissists demand constant praise and admiration, expect others to concur with their ideas and plans and are easily hurt and rejected.

Alinsky’s tactics work to Obama’s advantage. He repeatedly utilizes the tenets of Rules for Radicals attacking and targeting those, be they individuals or groups, who do not agree with or approve of his political policy initiatives. Obama appears most content orating between two Greek columns, at an elevated podium, in a stadium full of weeping, cheering devotees, smoke machines puffing away while soaring violins play Handel’s Messiah at his entrance.

Since Election Day, Obama has been acting the part of a narcissistic, alpha-male, marking territory like a dog racing around a hydrant claiming it as his own. If anyone tries to impede him, he shifts into bullying, aptly applying Alinsky Ghost of Radicals Past methods, insuring those perceived as a threat are aware he alone is the leader of the pack.

Alinsky scholar, Barack H. Obama, doesn’t take well to other dogs coming around his telephone pole barking and baring their drooling fangs demanding he back off.  It appears Obama has decided, in true Alinsky style to“… target, freeze, personalize and polarize” his political opposition.

One shocking example of this is the Department of Homeland Security’s (DHS), presently identified as The Department of Haughty Socialists, “Intelligence” Analysis Report. Unclassified and widely distributed entitled, Rightwing Extremism: Current Economic and Political Climate Fueling Resurgence in Radicalization and Recruitment. This 10-page atrocity is devoid of facts and based solely on discriminatory, political profiling-type supposition whose presentation illustrates typical Saul Alinsky technique.

The anti-capitalist spirit of Alinsky is goading Obama to take a sword to the reputation of rightwing conservatives, instructing him to target them, freeze negative public perception, personalize the attack and polarize all people on the right without distinction. “The Radical may resort to the sword … He hates these individuals not as persons but as symbols representing ideas or interests which he believes to be inimical to the welfare of the people. In this case, this method is being used as patent intimidation and chastisement, resulting from the Rights lack of support for Obama’s narcissistic plans to radicalize and socialize our entire nation.

The Intelligence and Analysis Assessment warned law enforcement officials of the threat of rightwing extremists. After its worldwide release, the information specified that the supposed impending terrorization is “largely rhetorical”and there are no “…indicated plans to carry out violent acts.” Translation: the report is based on pure speculation and has no specific information to back up accusations. Nonetheless, symbolism, although errantly applied, does give substance to the impressions and thoughts of the uninformed masses, which is precisely its purpose.

The groups, under attack, include anyone who disagrees with big government, those who favor federalism, anyone who opposes illegal immigration, second-amendment rights advocates, pro-lifers, service men and women returning from war in Afghanistan and Iraq. Whether they are individuals or groups like the military, NRA or Birthright, all are now considered a potential terrorism concern to the Obamalinsky administration. It seems as if the specter of Saul Alinsky is whispering to his apprentice reminding him that “Ridicule is man’s most potent weapon.”

This administration wants to steer the public away from what they call the “politics of fear” by rejecting the terrorism moniker as fear based, renaming terrorists, man-caused disaster-ists. They then assign the name “terrorist” to Americans in hopes of cultivating an environment of trepidation among the citizens of this nation one-toward-another. Alinsky has taught Obama well that the “…morality of a means depends upon whether the means is being employed at a time of imminent defeat or imminent victory.” Through the misrepresentation of many upstanding Americans this administration has targeted as a threat to the nation innocent private citizens.  Even referring to conservative political banter, on the Internet, as “chatter,” which is the language used to describe intercepted terrorist communication.

Shamelessly, the Intelligence Based on Ignorance Report amassed returning veterans together with, ex-military man turned, Oklahoma City bomber Timothy McVeigh and a pro-gun, Philadelphia shooter who killed three police officers. What better way to cultivate the soil for a paramilitary group than to wear away the nation’s trust and foundational confidence in the United States military? An Obama paramilitary organization can be counted on to abide by any command from their leader, made-up of illegal immigrants and scores of people made dependent for survival upon his policies. A band of yahoos who are willing to apply the Alinsky principal that, “In war, the end justifies almost any means.”

The extremist report repeatedly mentions this, “historical election” as recruitment tool for the Right. It clarifies that “most statements by rightwing extremists have been rhetorical, expressing concerns about the election of the first African American president, but stopping short of calls for violent action.” One problem is that the assessment fails to give examples. It is replete with conspiracy theory, accusations and long-shot associations but extremely deficient in facts, examples or references. Even going so far as to say that “…in the run up to the election, extremists appeared to be in the early planning stages of some threatening activity targeting the democratic nominee,” once again no citation or proof, failing to identify the extremists.

Obama, under Alinsky’s tutelage, managed to stir up a good dose of racial suspicion and division, accomplished through personal pit-bull, Homeland Security Secretary, Janet Napolitano. Napolitano implicated individuals with policy beliefs adhering to less government, faithfulness to the Constitution, right-to-life, respect for law and opposition to illegal immigration. She did this through nuances implying these values are somehow connected to racial bigotry.

This suspect examination of rightwing extremists naturally brought up the illegal immigration issue, highlighting “prominent,” unnamed civil rights organizations having “observed” an increase in anti-Hispanic crime. Unfortunately, neither was the Hispanic civil rights groups identified, nor was there any statistical data offered to back up the statement. The opportunity to bring balance was curiously overlooked by failing to mention that Hispanic crime is on the rise in our country, or the obvious terrorist aspect of marauding Latino street gangs.

The assessment analysis doesn’t waste an opportunity to intimate that Christianity may play a role in extremism by mentioning “end times” prophecy in the same breath as racist, anti-Semitic, conspiratorial, violent Christian Identity groups. The goal here has an obvious justifiable agenda.  Liberal author Mary Beth Rogers said there are, “Only two kinds of people who can afford the luxury of acting on principle, those with absolute power and those with none and no desire to get any…everyone else who wants to be effective in politics has to learn to be ‘unprincipled’ enough to compromise in order to see their principles succeed.”

This report is an effort to convince the public that DHS is concerned with protecting the general public from the danger of potential home-grown terrorist organizations and then morphs into a terrorist extremist itself. The definition of terrorism is the threatened use of force by a person or organized group against people with the intention of intimidating or coercing societies or governments often for ideological or political reasons. The rightwing of this nation is the group being terrorized by the President’s administration. Conservatives are being threatened by the force of words with the intention of menacing and coercing us into surrendering to a left-wing, liberal narcissists ideology and political persuasion.

Saul‘s protégé knows that “The threat is usually more terrifying than the thing itself.” The danger of being viewed as a terrorist, extremist, being grouped together with militia men who threatened to kill illegal immigrants, domestic terrorists, Ku-Klux Klansmen and White supremacists, is being used as an Alinsky inspired means of control to daunt and smother political opposition.

Barry Soetero, ACORN community organizer, sees us as his own large scale neighborhood and he is applying Alinsky organizing techniques on us to pressure us into submitting to his socialistic plans for this nation. The Narcissist-in-Chief is lifting his leg on a group of people who refuse to allow him to mark us as his own or transform us into the prescription he needs to address his self-absorbed issues by defining us as terrorist extremists instead of the patriotic Americans we are!

Obama’s desire to target, freeze, personalize and polarize fifty-percent of the population and make conservatives or rightwing political adherents a bigger threat to the safety of this nation than true Islamic extremists that desire to see us destroyed. His view of those who disagree with him has been exposed in this report, as well as his pathetic clutching at obscure, pitiable, rare examples in an effort to isolate and shut down opposing political dissent.