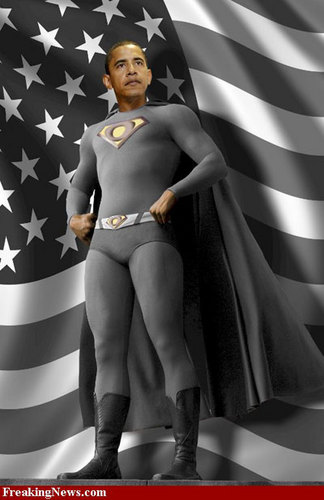 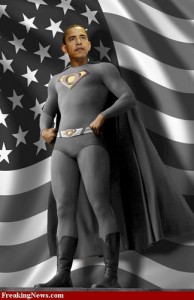 Religious belief can manifest itself in faithful devotion to an acknowledged reality and does not always include the worship of a deity. Political piety can involve scrupulous and conscientious faithfulness to a person, idea or movement, which is the type of devotion evident in politics down through history as well as today.

Karl Marx, demeaned belief in God saying, “Man, has found only the reflection of himself in the fantastic reality of heaven, where he sought a superman.” What Marx failed to recognize is that without god men continually delude themselves into thinking superman resides outside of heaven and within human kind. In a world that equates religious belief with lack of intellect the trend has been to make supermen of political figures.

History is replete with leaders who espouse deprecating ideologies, despots who never fail to install themselves as objects of veneration. Swept up in passion for their cause politicians are elevated to superhuman status by followers who are buoyed by enthusiasm, propaganda and longing to be part of Utopian change. Add to the mix powerful charismatic rhetoric, class, race or religious warfare together with lofty promises of provision and you can modify the location and era but the result is always blind religious devotion to autocratic dogma.

Historically, Jew haters and secularists grapple for the opportunity to worship political ideologues. They tend to pursue leaders who are ushered into power on populist sentiment, economic calamity and class warfare. On the promise of change political disciples eagerly elevate mere flesh to godhood with tearful reverence. The oppressed, heartless and spiritless flock fail to distinguish radical adulation of an elected official as the fulfillment of what Marx described when he said, “Religion is the sigh of the oppressed creature, the heart of the heartless world…the spirit of a spiritless situation. It is the opium of the people. The demand to give up the illusion about its condition is the demand to give up a condition which needs illusions.”

Conditions based on illusions are how for decades Hitler managed to persuade and control Germany. He was a charismatic, dynamic speaker capable of mobilizing impressionable German youth. Swallowed up in the revelry of crowd dynamic it would be hard for those without strong moral conviction to resist the fervor. Hitler convinced millions of their Aryan superiority justifying extermination of more than six-million innocent people, all while earning the title of Time Magazine’s Man of the Year.

Initiated by religious devotion to a self-aggrandizing superman “Heil Hitler” became the Sign of the Cross for Germans and was the mantra identifying the faithful haters of International Jewry. In 1936 Joseph Goebbels, Hitler’s chief propagandist, said that “Germany has been transformed into a great house of the Lord where the Fuhrer as our mediator stands before the throne of God,” a depraved premise never once repudiated by Hitler as being something the Deutschland should reject.

The rousing speeches eventually ceased, the crowds dispersed and neither Hitler, nor his pious cult endured the test of time. The end of the war and the suicide of mere mortal Hitler compelled the Nazi church and their false god to, “give up the illusion [and] give up a condition which needs illusions.”

Nazi German-like throngs are not outdated. False religion in the form of political zeal is not exclusive to the Nazi regime, it endures today. The rock concert atmosphere and the “…fever of a religious gathering” has become the new measure of political clout, not only in the US, but also in Iran. Iranian dictator Mahmoud Ahmadinejad has elevated himself to the position of harbinger of the Mahdi, the Muslim “Restorer of religion and justice who will rule before the end of the world.”

Ironically, chastising, eradicating and “wiping Israel off the map,” is somehow always woven into the rhetoric of political magnetism. Similar to Nazi German’s swastika, the flag of Hezbollah can be seen waving in the wind at Ahmadinejad’s campaign rallies indicating though the Nazi regime no longer exists, desire to rid the world of Zionism lives on in the hearts of those who make gods of men.

Hitler believed he was on a mission from God preaching, “What we have to fight for is the security for the existence…of our race and people…the maintenance of our racial stock unmixed…so that our people may be enabled to fulfill the mission assigned to it by the Creator.” Mahmoud Ahmadinejad heartily agrees and is determined to finalize Hitler’s unfinished objective by once and for all stamping out the Hebrew race. Ahmadinejad, messenger of Allah, confirmed his divine charge by recollecting that at a 2005 UN speech someone saw an aura around him, attesting to his sacred calling.

At political rallies, “when it comes to showmanship, Iran’s leader is a hard act to beat.” Mahmoud is presently only rivaled by one politician who stirs unrivaled religious zealotry and whose name is Barack Hussein Obama. Obama chooses to address massive crowds on the world-wide stage every chance he gets. He accepted the presidential nomination at Invesco Field to the delight of 80,000 adoring partying parishioners who were caught up in the throes of religious-type bliss. Exhibiting insolence and skill in intrigue Obama flagrantly straddled a stage adorned as a Greek temple, which could only house a god of Zeus’ stature who “Being the supreme ruler upheld law, justice and morals, and [was] the spiritual leader of both gods and men.” What could be more apropos for the pinnacle of power Obama aspires to?

Obama’s Cairo speech demeaned America, praised and cajoled Israel’s enemies, stretched moral equivalencies between the Holocaust and Palestinian refugee camps. He equated burqa wearing, beheaded, stoned to death treatment of Muslim women with American feminist progress. His dialogue contained all the usual ingredients included in the speeches of those who inspire political religiosity. Yet, Obama’s hypnotized faithful praised his oratory as, “grand…positive and hopeful.” His rhetoric was so convincing that followers have gleaned humility from brazenness, caring from control and cited within the content of his speech, “complete humility.” The only heady question his admirers want answered is if the “President they elected and spoke for them so grandly…can carry out the great vision he gave them and the world?”

Following in the footsteps of other Time Magazine Men of the Year Obama is a radical ideologue who has a specific vision for socialistic change for America. Though not as diabolical in nature as Hitler’s Germany or as hatefully driven as Iran’s, Obama’s agenda is still imposing. He is neither a Nazi, nor a Islamic-style despot, but is equally disconcerting in his ability to enrapture and enlist large crowds with enigmatic speech-making.

Obama appears to welcome the title of god, “Obama’s standing above the country, above – above the world, he’s sort of God.” Godliness is a designation Amadinejad has yet to discourage as he ushers in the twelfth Imam and Obama, much like Hitler, has yet to denounce this title as being blasphemously inappropriate. Obama promotes himself as the superman we seek. His desire is to transform America into a reflection of himself. His vision is the heaven on earth, those who worship collectivism and reject God, still believe is possible.

Curiously, it is those who reject a deity who rush to the fore requesting Obama designed government hands be laid on them. Their faith healing vested in an Obama cure-all, much like Germany saw Hitler as the answer to their national tribulations, or the Middle East sees Iran’s nuclear program as the answer to a nagging Israel problem. Obama’s followers imbibe deeply of the opiate of false hope and negative change never questioning the Nazi-like smell coming from the crematorium that is incinerating what is left of Lady Liberty. Obama cohorts condone the stoning to death of the Constitution in the same manner Iran stones moral offenders.

Ushered in on the wings of economic crisis Karl Marx apprentice Barack Obama is transforming himself in the minds of the masses into what Marx warned was an illusionary superman. Amidst “Yes We Can” hymns sung in a stadium filled with weeping, Obama-opiate addicted supporters the president cultivates devout delusion and draws personal power from a proletariat state he insists on systematically fostering.

Though not comparative on levels of negative influence, leaders like Adolf Hitler, Mahmoud Ahmadinejad and Barack Obama similarly all feed like parasites off distress. They become a pseudo-religion promising Utopian solace. Their earthly paradise is replete with whatever they have convinced followers only they can provide, be it racial purity, the ushering in of mahdaviyat or, in Obama’s case, a socialistic state of equality and nationally imposed fairness. History has proven the need to relinquish the conditions and reject the illusion these leaders represent and for “Man, to find the reflection of himself in the fantastic reality of heaven, where the only true Superman dwells.”