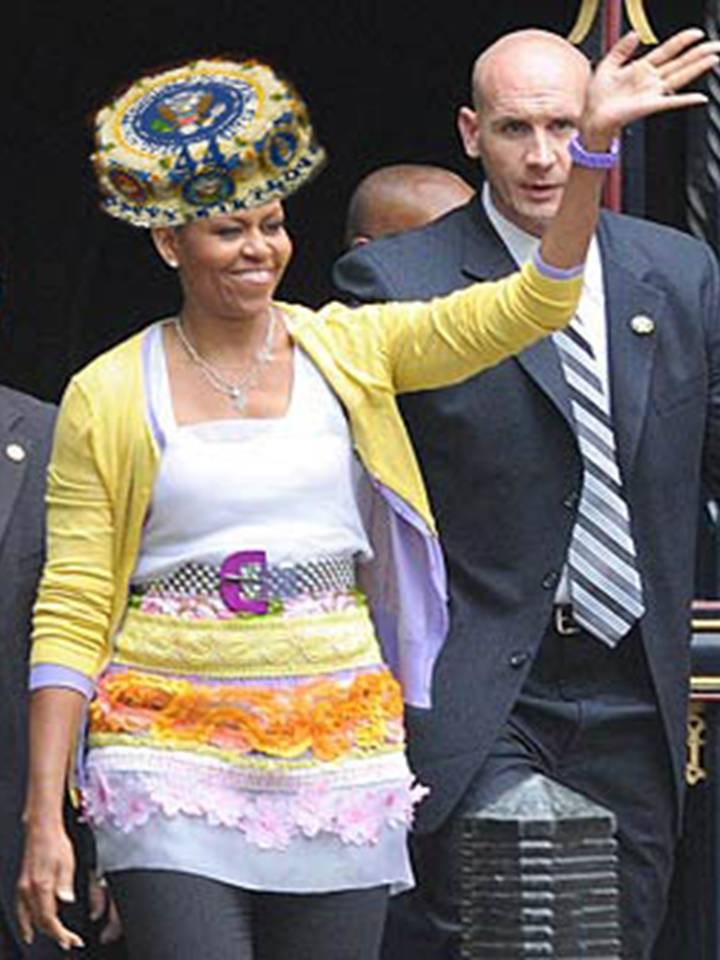 The always fashion forward Michelle Obama not only wears cutting edge clothing, but is also an inspiration to designers worldwide.  The mere sight of her conjures up creativity and excitement in the fashion community.  The First Lady of the United States has become a creative muse inspiring all sorts of head to toe fashion statements. Michelle Obama’s iconic beauty has even inspired milliners to creation heights in bonnets, fedoras and sun-hats bringing back the lost art of hats.

On a recent trip to London’s Westminster Abbey Michelle’s exciting outfit became an inspiration for a sensational hat that is sure to become all the rage.  The First Lady took the fashion world by storm after tying a headdress around her waist borrowed from one of the performers in the Lion King.  World famous designer Narciso Rodriquez has said of the First Lady: “Michelle’s innovative style and ability to recognize trends is astounding.”

Long, lean and lithe who better than Michelle Obama to carry off the pastel layered apron tied around her waist? Much to the delight of the British press, Michelle refused to be out of step with funky designer Anna Sui just because she was visiting old-fashioned Westminster Abbey.

Irreverence aside, the First Lady exercised boldness when she dressed like an Easter basket in June adorned with pastel strips of crepe paper, which was quite a contemporary choice of clothing to wear when touring the site of coronations and century’s old grave sites of English monarchs.

Nonetheless, the majesty of Gothic monasteries paled in comparison to Michelle’s ability to cast aside traditional formalities. Agreed, the get up was a somewhat iconoclastic choice for a field trip to Westminster Abby.  However, in descending upon the Collegiate Church of St. Peter dressed in that outfit, the Queen of American style brought long overdue, “Yes We Can” adjustment to priggish, stodgy Englishmen.

In light of the history surrounding the Abbey, conservative British types viewed Michelle’s choice of attire a tad discourteous.  Toned and tough Michelle was not intimidated she set her British hosts straight from the get go.  Standing atop a sarcophagus containing the remains of Bloody Mary Queen of Scots, Michelle shared that Barack sent her to England, dressed as a wreath to represent his historic presidency and to outshine the graves of oppressive Anglo-Saxon luminaries buried beneath the celebrated cathedral.

The fracas surrounding Michelle’s colorful outfit must have caused her confusion about who was actually buried in the Abbey. Our Princeton grad First Lady, mentioned that she was disappointed that there weren’t any African Americans buried at Westminster and hoped in the future the English would consider being less discriminatory and more diverse in their burying policy.

Excusing herself before a dumbfounded group who appeared awestruck, Michelle expressed relief when she realized she overlooked the grave of Martin Luther King Jr. who was buried right beside Charles Darwin.  Michelle stated that she thought it was a nice gesture, and long overdue, for the English to entomb a great American Black leader at Westminster Abbey amongst the rest of the “Kings.”

Michelle’s tactful tour guide quietly interrupted to inform her that the Martin Luther buried in the church was the theologian of the Reformation and the Martin Luther King Jr. she was referring to was interred across the pond in Atlanta, Georgia.

Regardless, as usual, the trip to Britain was a fashion tour de force with Michelle’s valiant fashion sense on full display.  In fact, the Westminster frock, as it has come to be known, has inspired an accessory line with pieces being added daily to accompany Michelle’s intrepid style.

The first addition to the line was a hat designed to go with the frilly ensemble.  For President Obama’s 48th birthday, Betsy Johnson designed Michelle a coordinating hat to celebrate the President’s first birthday in the White House.

Fashioned with the same playful style the First Lady displays everywhere she goes, Betsy’s design screams “birthday cake” all over it. Betsy adorned the piece with the same pastel colors and jaunty style as the Westminster frock.  The one of a kind fashion statement accessorizes the outfit Michelle debuted in England to a tee. The creation for the First Lady’s head was considered an additional birthday surprise for a President who supports his wife’s outstanding choice in wardrobe and applauds her sensational élan.

The hat was unveiled for the first time on the night of Barack’s birthday party. After an appropriate drum roll, the edible birthday cake was announced and rolled into the dining room accompanied by the Isaac Hayes theme song “Shaft” and at the same time Betsy Johnson crashed into the dessert table while doing cartwheels for David Axelrod.

Michelle closely followed the Epicurean masterpiece adorned in the matching hat aglow with 48 candles signifying the President’s 48 years  of bringing “hope and change” to a lost and dying world.   Both the hat and the cake were a spectacular coupling of panache and ganache.

Fashion was on display all around that evening, from Michelle’s one of a kind hat to Barack’s very special guest Beyoncé Knowles who was on hand to sing, “Happy Birthday Mr. President” poured into a replica of Marilyn Monroe’s Blackwell-designed nude dress.

The First Lady took the occasion to promise she would continue to unleash prosperity in her own closet and travel round the world inciting even more creativity.  She expressed excitement that the Lion King/Westminster Abbey clothing line had inspired the beautiful creation she had atop her head.  After viewing the crown jewels in England, Michelle intimated that her hat could be the first addition to the Barack Obama Presidential Library.

Michelle expressed that as a citizen of the world she looks forward to her next trip to France where she hoped international designers would be inspired to create for he a sartorial dauphin-style cap to go with some of her newer outfits.  The First Lady shared with Betsy Johnson, who will be directly involved in the Parisian line,  an in-depth history lesson  informing her that the:

Most shocking thing about Queen Marie Antoinette was her extravagance, well documented in the yearly records of her clothing expenses, in dressmakers’ accounts, and in memoirs saying that the queen wore nothing twice… still considered her chief crime, but the queen had no sense of its effect.

Michelle went on to share that in light of past history she has decided to skip having a white, pleated cap added to her wardrobe and hopes to be wearing a Barack Birthday Bonnet for many years following the coming revolution.

Wanting a piece of birthday cake, guests waiting all evening for a slice of the sumptuous creation impatiently teased, “Off with that hat,” which signaled to the milliners muse it was time to say, “Alright, alright let them eat cake!”