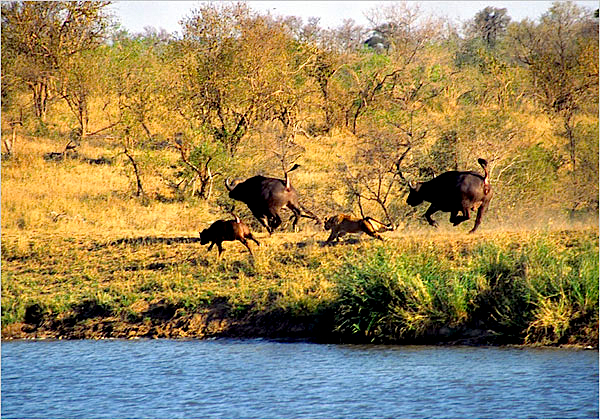 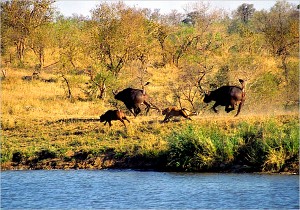 The Battle at Kruger is a video depiction of lions and crocodiles attacking a Cape Buffalo calf at a watering hole at Kruger National Park in South Africa.  The youngest and weakest in the herd is ambushed, dragged into the water where a fight ensues as two crocodiles attempt to snatch the prey from the lion’s jaws.

Eventually the lions wrest the buffalo from the reptile clutch and prepare to devour the prize.  In an uncharacteristic turn of events the scattered herd regroups charging and tossing one lion into the air — freeing the little calf.  A vitalized buffalo family chases away the remaining strays and surrounds the unsteady baby within the safety of the herd.

A lesson can be gleaned from the Battle at Kruger about liberal propensity to isolate children from parents and the elderly from loved ones. The left’s culture of death eagerly guides, counsels and assists the weak and vulnerable if the effort assures empty cradles and prematurely occupied graves. With that in mind, it would be best for young and old alike to remain alert and avoid liberal watering holes if not encircled by a drove.

Hiding in the tall grass, the left cloaks eugenics in compassion, promoting death under the pretense of caring. Like all thriving hunters liberals are aware that isolation insures a successful kill.  In response, they plant seeds of alienation to sway the defenseless into believing government proxies are better equipped than family to decide whether to dispose of the unborn or decline nutrition or hydration

Take for example, Linda Douglass, communications director for the White House Office of Health Reform, separating prey from the pack by parroting pro-choice rhetoric targeting elderly Americans.  When referring to end of life counseling outlined in HR3200, Douglass plants lack of confidence in the minds of vulnerable seniors by saying, “these are such hard conversations for people to have inside their families.” The assertion in her remark is that professionals, not family members, better assist in making life and death decisions.  This type of rhetoric has herd thinning potential by granting the government unrestricted opportunity to convince the elderly to reject end of life care.

Large sections of the health care proposal sets apart “useless eaters,” from the national herd with words beckoning America’s elderly toward the government maw for guidance. When queried by MSNBC’s Dr. Nancy Snyderman about public discomfort with death panel rhetoric in HR 3200, Douglass used the same anti-family, liberal language used against those who support parental notification.  The Officer of Health Reform’s argument eerily paralleled radical pro-choice talking points saying, “While young women are encouraged to talk to their families, there are some circumstances in which daughters can’t discuss certain sensitive issues with their parents.”

This type of language underscores bureaucratic death merchant’s relentless desire to cut off the pregnant and aged from the influence of those who would otherwise convince them to choose life.  Every self-respecting liberal is keenly aware that morals, personal conviction and family input muddies the waters, especially when convincing children to submit to dilation and curettage.  Likewise, government provided monetary incentives are best realized if unhindered by sentiment especially when guiding quivering hands to sign “Do not resuscitate” orders.

The left is notorious for exploiting family dynamics to justify loading up shuttle buses with underage girls for excursions to abortion clinics without notifying parents. Dividing children from parents is a pretext that has proven so successful for pro-choice advocates that similar reasoning now targets the nation’s elderly.  The hope is weak calves will stray into the clutches of government appointed counselors who can then circumvent kindly kin to gain sole authorization to disconnect ventilators.

Douglass’s political correspondent skills contribute to her proficiency at hiding the end goal of biohazard bags containing one less drain on the government dole. Regardless of denials, HR 3200 requires abortion and elimination of the elderly in order to subsidize lower health care costs and bottom lines. Careful examination of the proposed health care bill exposes its true intent to steer elderly Americans toward decisions benefiting budgets and not the sanctity of life.

The Battle at Kruger is a reminder for Americans that a pride of government lions and a swarm of bureaucratic crocodiles lay in wait to pounce upon weakness in both the womb, as well as the wheelchair.  Like a group of emboldened buffalo those committed to life must politically charge aggressors and free victims from the murderous clutches of policies like abortion on demand and euthanasia.

Americans cannot allow liberal rhetoric to woo the fragile from the herd into dangerous and deadly ambushes with statements like, “these are such hard conversations for people to have inside their families.” Americans are compelled to honor and defend the weakest among us.  Commitment to life and fierce Cape Buffalo-style loyalty toward the aged and unborn restricts bureaucratic liberal lions access to the vulnerable and assures Americans safety from an ever-encroaching pride of Obama predators.