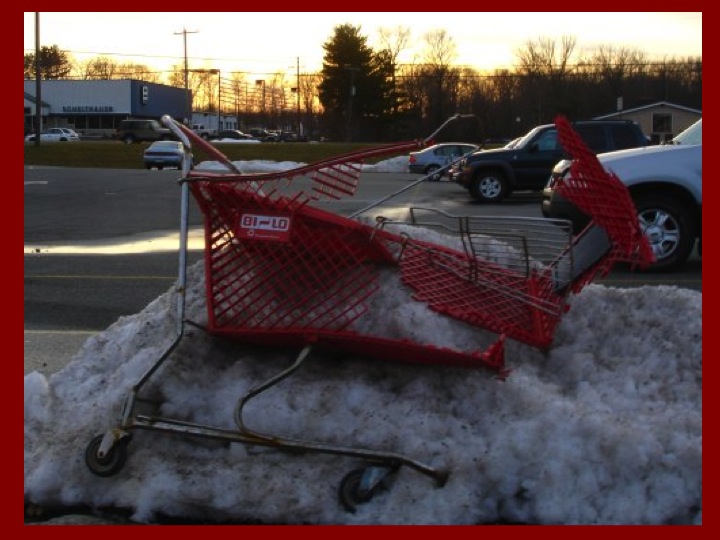 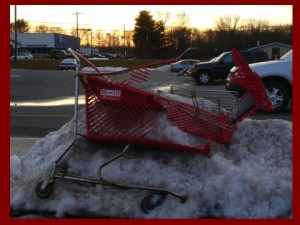 Anyone who has ever gone to a grocery store understands what its like to get an uncooperative shopping cart.  You arrive at the store.  The place is packed.  You look around the parking lot and find one, lone shopping cart.   You grab it and start to push realizing that the wheel is bent or doesn’t turn properly. You have to make it work because there are no other carts in the lot or in the store …you’re stuck with it.

You have specific shopping goals.  Your plan is to shop around the outside of the grocery store, vegetables, fruit, dairy and healthy food.  The shopping cart has other ideas.  You push right, it pulls you left – in order to get it to go in the direction you want it to go is an exercise in frustration, strength, determination and commitment.

That is exactly the position this country finds itself in right now.  We have a President in the White House who can be likened to a shopping cart with a bum wheel. Thanks to the crowd that took to the store on November 4th, Obama is the cart we’ve been dealt and the direction he wants to take us in is left, left and hard left.  His wheels are so gummed up with radical, left wing liberal junk that they have a mind and destination of their own.

Obama is attempting to pilot us down the aisle to buy radical products whose purchase will deny freedom, liberty and identity as a nation.  He is determined, no matter how many times the polls, Town Hall meetings or public opinion attempt to straighten the bum wheel…he bends left and promptly returns the wheels on his cart to the position he’s most comfortable with LEFT.

Barack wants us to not only purchase and adopt his choices, but his goal is to steer our cart out into the parking lot and compel us to take home and ingest the garbage food of  substandard policies.  His hope is that after being forced fed, our nation will be transformed from  a healthy, democracy into a pathetic, mediocre country politically resembling Renee Williams – obese, but malnourished on the fat of government control, intrusion and socialistic style programs.

We’re pushing — but Obama is one unrelentent shopping cart…dead set on maneuvering us where he wants us to go rather than where our citizens want and should go. We say check-out, he moves toward the frozen food aisle. America, a  high quality nation, is being subjected to substandard president who is desirous of guiding us in the direction of policies that are like spray cheese, Cocoa Puffs and stomach lining eroding Coca-cola.  Obama, the shopping cart with the bum wheel, is dictating America away from the grapes and avocados and insisting we move toward the Doritos.

Just like a persistent shopper who won’t be dictated to by an uncooperative shopping cart, America has decided she will put some muscle behind the pushcart and force it to go in the direction she wants it to go.  Americans are resourceful; in order to get the job done we’ll lift the front of the cart and roll it on three wheels if need be.    Based on the wave of Democratic fervor, patriotism, outrage and ire, which seems to have taken hold — Obama’s fatty sparerib obsessed shopping cart will be heading toward the low fat Greek yogurt, like it or not.

Barack Obama isn’t complying easily and is stubbornly pointing down the aisle with the rat poison, cheap dog food and flammable oven cleaner – but Americans aren’t buying.  Maybe the Dictator-in-Chief needs to be reminded by those with the Constitutional shopping list, we are the ones in charge. In case you’re unaware Mr. President, the cart doesn’t decree the direction – the cart serves at our disposal and works for us.

So, Barack Obama can keep pushing his radical agenda by trying to steer us in the wrong direction.  He can also enjoy the power while it lasts, because according to his swift decline in public opinion it looks as if in 2012 it is highly likely Obama may find himself and his rusty wheels retired from the grocery store and upside down in the political bum cart dumpster!