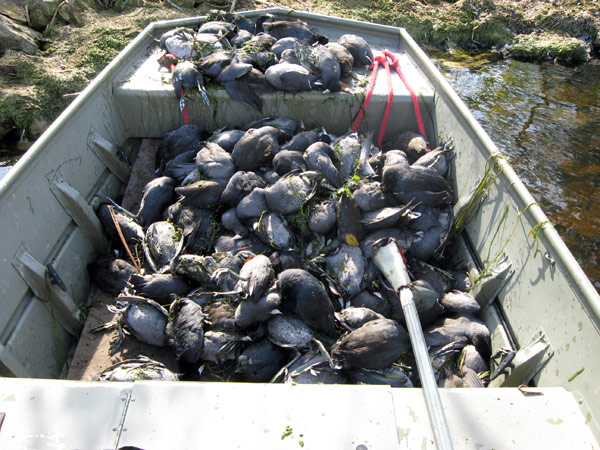 A stale loaf of Wonder Bread

at a duck pond can help you understand politics in a new and insightful way. No matter how scattered the ducks are or how far out in the water …throw out some crumbs and they come running, waddling and quacking to get the free goodies.

Barack Obama views America’s seniors like a duck pond full of slow floating, waddlers that can be bought with a handful of fusty semolina.  Originally, Obama came to the pond empty handed. Standing around with his hands in his pockets expecting worship regardless of predator policies.  Void of sustenance for seniors — Obama’s health care proposal not only doesn’t benefit the sitting ducks…it threatens their lives.

Obama’s socialized health care plan puts the senior voting block in jeopardy. Cuts in Medicare and Medicare Advantage, inevitable rationing, inaccessibility, forced end of life counseling has ducks staying as far out in the water as possible in hopes of saving their own lives from Obama who, for all intents and purposes, is a giant-sized predator.

Realizing that as of late ducks aren’t gathering at Obama’s feet and rushing toward him, Obama has realized that its time to drag out a loaf of Wonder Bread.  Obama is smart enough to know duck behavior indicates ducks naturally seek out easy food sources such as human handouts.  So with $250.00 dollars worth of cheap bread Obama intends to woo ducks back to his side of the pond by tossing out some dried croutons.

“It is so hard to resist ducks begging for attention, and it would seem that providing food for ducks would make them healthy and happy, but it doesn’t.” Most seasoned duck feeders are well aware that bread isn’t good for wildlife, but do it for their own altruistic benefit and could care less about the long-term well being of the gluttonous flock of dead ducks with bloated bellies…which is the case with the Duck-feeder-in-Chief.

When ducks eat stale bread it tastes real good for a while but the end result is ducks losing their ability to fly and unable to escape predators.  They suffer malnutrition, pollution, bacterial diseases like avian botulism and aspergillosis, a fatal lung disease from moldy bread.  Bread attracts pests, fosters aggression, interrupts natural instincts and, all in all, is deadly. Yet, Obama is stepping forward with a Costco sized satchel of white bread and using it to manipulate seniors who he hopes are on their way out anyway.

Although it means borrowing $13 billion and increasing the federal budget to throw out the stale bread to seniors, Obama remains unworried.  When ducks are fed bread or crackers, they become “engorged and fatty, which can cause them to suffer from heart disease, liver problems and other health complications.” The end result of gorging on bread works out Obama’s long-term problem where collecting large portions of estate taxes from all the dead ducks denied health care can pay off the debt.

Obama claims that the $0.70 cents a day is being issued because he is concerned that there will be, “…no cost of living increase next year,” because of negative inflation.  If Obama is really concerned about helping seniors, someone should tell him that a can of high quality cat food costs about $0.85 cents a can and that the stimulus check should be $310.25 insuring seniors get at least one nutritious meal a day!

Obama, the duck feeder, is convinced that seventy cents is what is needed to make everything duckier for his political ambitions.  His idea of supporting avian wildlife is to toss out a handful of feed consisting of a diet of government stale bread, which he is well aware not only harms ducks, but also eventually kills them.

As seniors waddle and quack wildly clamoring toward Obama to collect the $.70 cents a day he is handing out to sure up his sagging poll numbers, hopefully someone will pull on a pair of political hip boots and trudge down to the mucky pond to shoo seniors away from the fatal Obama stimulus scam.

What the senior ducks need is a political duck rescuer willing to inform them that, for a paltry handful of stale bread–supporting Obamacare, in the end, will cut swathe through their life at the hands of his Wonder Bread brand of socialized medicine.  Better to forage for aquatic life and bugs on their own and stay as far away as possible from the duck feeder loaded with poison pellets disguised by the government as duck food.