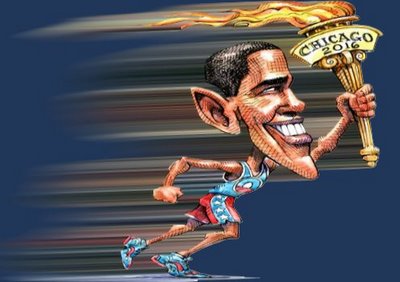 Inspired by his own celebrity, and regardless of the rival, it appears Obama believes exercising oratory muscle can bring opposition to its knees and “one voice” can wrest victory from the jaws of defeat. Always at the ready when liberal ventures are in peril of hitting the skids, Obama can be counted on to fly in and save the day by orating every obstacle into submission.  So secure is he in his rhetorical proficiency Barack Obama enthusiastically inserts himself into the midst of international competitions and high profile political campaigns.

One can’t really blame the guy for his personal view of himself. Barack Obama’s speaking skills are so superior that with no experience, and after eight unimpressive years in the Illinois State Senate, carefully placed words on a teleprompter, exquisitely timed pregnant pauses and cheesy slogans catapulted him directly into the Oval Office.

The reason for this type of stratospheric rise to power can only be explained by the principle that “Exceptionally articulate politicians begin with a great electoral advantage because the opinion-forming class is in love with words.”

However, like a bad actor with a brilliant script Obama is, “…discovering the truth about the power of oratory; it can only get you so far.”   Travelling to Denmark to vouch for the Olympics coming to Chicago and spending weeks campaigning for a horrendous blue state Governor, Obama’s empty rhetoric is disclosing to a formerly enamored world an amateur costumed in impressive attire, but void of substance.

Obviously, Obama learned nothing when pressing Presidential responsibilities took a back seat to spending 10 million dollars jetting to Copenhagen to dazzle the IOC and make short work of securing the 2016 Summer Olympics for Chicago.   In Obama’s mind, after months of deliberation, all that was necessary to seal the deal was a last minute visit from a luminary such as himself.  His purpose was to convince the International Olympic Commission that whatever had been decided, prior to his appearance, would pale in comparison to the power of his presence and words.

Obama nonchalantly arrived in Denmark fully convinced of his ability to sway the Olympic committee to place a duly deserved crown of olive leaves upon his egotistical head. He didn’t, and they didn’t, which “…raised serious questions about his perceived international star power.”

Obama flying to Copenhagen was questioned internationally after the U.S. was eliminated in the first round.  What many failed to comprehend was that the Olympics being hosted by Chicago was undecided for everyone except Obama.  His unwavering trust in his own charisma and public speaking skill has delivered the impossible for him every time.  Yet, this time when Obama flew in…America lost!

Addressing the embarrassing situation diplomatic Fox political analyst Tucker Carlson remarked that, “It’s good for us to fail in a high profile way every once in a while because it reminds us that we’re not God and there limits in our ability to sway other people.”  Earth to Tucker, earth to Tucker…while that may be true for some people, your hypothesis is nonapplicable when it comes to Barack Obama.

Based on what he said while campaigning in New Jersey and for Creigh Deeds in Virginia, a totally clueless Obama didn’t seem to understand the “growing disenchantment” with his incessant action-deficient talk. “Faced with real crisis and insecurity,” people sick of rhetoric are, “…demand[ing] substance and want to know precisely what mechanisms you are proposing to install to bring about that glorious and beautifully evoked future that you advocate with such forceful sincerity.”

Yet, Obama flew to New Jersey five times and spent the time talking mainly about, you guessed it, Barack Obama. “Listen, I want you to remember, when I ran for – when I ran for election, I did not say— (applause) –wait, wait, wait – wait, when I ran for election, I did not say this was going to come overnight.” Self-absorbed comments indicated that Obama perceived voters’ pulling the lever for John Corzine, as recommitment to none other than Obama. The President’s appeal to New Jersey voters was not for Governor John Corzine but rather an obvious appeal for reaffirmation of Yes We Can policy, which have proven to be a flawed, faltering failure.

Barry traveled to New Jersey in a similar spirit with which he sojourned to Copenhagen.  Once again, deluded that persona and rhetoric would insure victory for a Governor whose liberal guiding principle of taxing and spending have wreaked statewide havoc in the same way Obama’s liberal policies have negatively affected America. In the face of defeat, the President venturing to the Garden State the weekend prior to the election indicated he believed the power of his personality so strong; it could stem the tide against disaster even at the eleventh hour.  Regardless of the effort, Barack Obama’s unshakable belief in himself was proven wrong on Election Day when a pattern that started in Denmark began to emerge.  Obama flew in and a loss for both Creigh and Corzine followed.

The question now is whether Barack Obama is self-aware enough to recognize his waning political influence after being humiliated internationally in Copenhagen and after witnessing the party he stumped for get its proverbial clock cleaned?  New studies indicate that the density of dopamine receptors in the brain determine whether we learn from our mistakes or not, which could explain a large majority of what our nation has experienced over the better part of a year, “dope-a-me-me-me-me-n.”

So, as the nation sat riveted to election results, instead of monitoring the success of the gubernatorial campaigns he stumped for, Obama had something more compelling piquing his interest–a HBO documentary, starring none other than himself. Barack Obama remains captivated, convinced and concerned with the always influential and ever enthralling Barack Obama, as well as oblivious to the fact that lately, in spite of what he says, when he flies in, crushing loss follows closely behind.