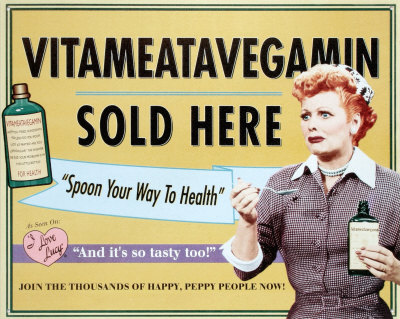 Congressional Democrats are committed to overhauling the healthcare system and while doing so obviously do not intend to let the public know what the legislation contains for fear Americans will reject the QVC sales pitch.  Instead they are embarking on a successful method employed during the 2008 election of false advertising and selling a bag of goods without revealing the ingredients or the affect.

In a hurried effort to pass a bogus health care bill it is imperative that the merchandise’s contents be hidden from those it’s being sold to.  Instead, Democrats have dragged out a conceptual Vitameatavegamin health care bill for public consumption void of legislative language and whose obscure costs and implications no one bothers to consider.

Anyone over the age of forty remembers Lucille Ball playing the part of a woman auditioning for a Vitameatavegamin commercial where a tonic is presented as the, “…answer to all your problems.” In the episode, the director of the Lucy’s foray into commercials is unaware that the “healthful” concoction of “…vitamins, meat, vegetables and minerals,” also has listed in the fine print a 23% alcohol content.  The Democrats might as well be holding up a bottle of Vitameatavegamin every time they speak on behalf of the health care proposal.  However, unlike Lucy’s director, Democrats are well aware of sinister particulars residing in the legislative proposals, but continue to resist posting ingredients online in an attempt to present a benign product that ultimately delivers a punch.

For all intents and purposes, Speaker of the House Nancy Pelosi is our very own Lucy convincing America to sign onto a product she knows nothing about.  Smiling a forced, phony grin Nancy continually auditions to retain her seat of power. The only thing missing from the Speaker’s head is a lovely, little retro-lace Lucy-style bonnet.  Nancy, like Lucy, assures America that the Vitameatavegamin health care bill is a panacea that will be the ultimate, “…answer to all our problems,” especially if it includes a high-potency vitamin packed public option she guarantees it will include.

In the episode clip, Lucy auditions for the part of Vitameatavegamin girl beaming widely into the camera.   The director tells her to recite the script.  After citing the ingredients, the director tells Lucy to take a big mouthful, smile and wink saying what Speaker Pelosi alleges today about health care, “…it’s so tasty too…just like candy!”  However, after Lucy lifts the swill to her mouth the look on her face tells the whole story.  Yuck!  Her lips invert, the two muscles in her neck pop as she attempts to down the ghastly medicine. A similar situation could pose a problem for Pelosi’s sales pitch as personal commitment to a product ultimately clinches the sale.

After Lucy’s adverse reaction to the liquid remedy her director tells her, “No, no, no…you’re supposed to like the stuff. You’ve got to smile and be happy,” which was even difficult for someone determined to win the title of Vitameatavegamin girl.  The content of what Lucy was forced to swig was not fit for human consumption, which is precisely why, unlike a compliant Miss MaGillicutty, Democrats repudiate for their own consumption a product they are pushing on us.

Barack Obama disregards the vomitacious nature of the proposal and perseveres repeating, “OK, take it from…It’s so tasty too!” And, despite national rejection of the proposed fix, the Director-in-Chief personally holds our nation’s nose while dictatorially insisting we say “Ah.” According to studies, ninety-three percent of the American population feel a remedy is unnecessary for a condition that doesn’t exist.  Yet, the Vitameatavegamin health care sales team continues to drone on asking the wary, “Why don’t you join the thousands of happy, peppy people?”

In the fifty-year-old episode, Lucy slowly becomes desensitized to the questionable ingredients in the bottle as her ability to focus diminishes.  Her reaction to the product presents a potential ruse that Democrats could employ in their quixotic quest to control life and death. Bleary eyed and inebriated Lucy smacks her lips and says, “This stuff tastes pretty good…after you get used to it!”  Thus, if Democrats have their way, they will continue to force a tonic of half-truths and obfuscations on the public.  With any luck the effort will result in an America, so disorientated by lies that without question, the majority will guzzle down a Vitameatavegamin health care bill—consigning even the sober to endure its influence.

Speaking on behalf of the Director-in-Chief, our very own little Vitameatavegamin girl, Nancy Pelosi, has gotten to the point where she is encouraging, “Everybody to get a bottle of this stuff!”  What began as a coherent attempt to convince America to sign onto sane cost and competition directed health care reform has now been reduced to statements about public options that are on par with Lucy asking, “Do you pop out at parties…are you unpoopular?”

Nancy, Harry and Barry – are modern day snake oil salesmen.  Their medicine show consists of constant hawking to step right up and join the millions of Americans who have yet to read the ingredients, have no idea what it tastes like, or how it will affect them–but look to government to provide them with a healing elixir.

Yet, the Democratic sales pitch appears to be breaking down with every slam of the clapboard. As Pelosi, Reid and Obama work together to preserve their bottle of bureaucratic belladonna it becomes apparent they are the ones intoxicated with power. Presently, what we are witnessing is a desperate coalition of Democrats reduced into a desperate band of marketing mavens attempting to convince dubious consumers to invest in Handy Brushes.

In the famous Lucille Ball Vitameatavegamin episode the more she persisted in promoting her product the clearer it became what it actually was.  Hope endures that just as Lucy buckled under the influence of a shoddy product, the American public will recognize that like  a bottle of Vitameatavegamin, the bill the Democrats in Washington DC swear will surely be as easy as “spooning our way to health,” has neither our health, nor our well being in mind.