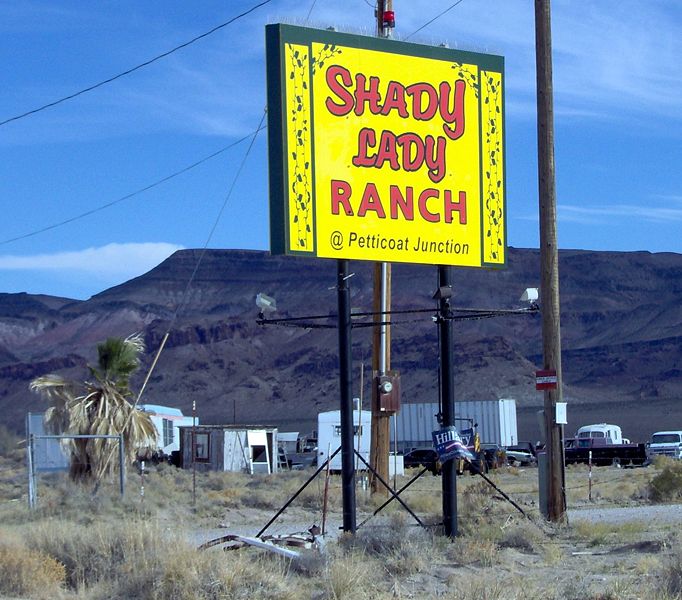 Nevada is on fire with opportunity.  Prostitution has been legal in rural Nevada since the early seventies and now owner of the Shady Lady Ranch, Bobbi Davis hopes to hire Nevada’s first legal male prostitutes.  The female owner of the brothel claims now that Nevada state health officials have approved a method to test men for infectious diseases, male prostitutes could be hired within the month.

Politics and prostitution are similar, just ask Ben Nelson of (D-Neb) who believes “Change is never easy, but change is what’s necessary in America.” If Bobbi Davis manages to usher in change by making a dent in the male prostitution market, Senate Majority Leader Harry Reid can direct the Nevadan Madame toward a large pool of accessible applicants.  In fact, Reid may even be able to recommend specific gentlemen experienced in the field that, as a result of an impending election, may be available for work.

Attempting to pass health care reform has brought morally unrestrained political libertines out of the woodwork en masse in Washington DC. While, politicians do not typically engage in ‘sex’ acts for money per se, accepting capital to agree to do things one would normally morally oppose can only be defined as prostitution. Thus, prostitution runs rampant on Capitol Hill because money has become the primary incentive for garnering votes.

Unfortunately for America, unbridled prostitution taking place on Capitol Hill and senators voting for health care reform presents a greater menace to national well being than HIV to streetwalkers.

Take for example, Ben Nelson of Nebraska who proudly identifies himself as one of four pro-life Democrats in the Senate.  Nelson held the moneybag for months threatening obstruction of health care reform based on the bill’s legislative language on the key issue of federal funding for abortion.  Nelson’s staunch stand against subsidizing abortion with tax dollars situated the Senator in the unique position to be offered and accept 30 pieces of silver in the form of federal aid for Nebraska. According to Senator John McCain, R-Arizona, “Nelson’s victory came at the expense of 49 states.” In other words, Nelson’s payoff betrayed American taxpayers and turned the nation over to be crucified.

Ben Nelson’s priority concerning the slaughtering of the unborn vanished when Nebraska secured permanent exemption from funding federal Medicaid expansion.  When presented with the choice to either obstruct abortion funding, or host a second Nebraskan Black Hills Gold Rush in the form of $45 million to state coffers– for Ben Nelson, a flush state treasury trumped saving babies. “Nebraska’s Republican Sen. Mike Johanns said he was “stunned and incredibly disappointed,” and called the compromise’s abortion language a “watered-down accounting gimmick that leads to Nebraska taxpayers subsidizing abortions in other states.”

Ben Nelson’s ‘cornhusker kickback/Nebraska windfall” makes the Senator a potential staff member at Bobbi’s sex ranch.  If the Madame is looking for male prostitutes Nelson  ‘kissing Jesus’ and then selling himself for a price makes the Senator a prime contender to secure one of the two plum positions for men at the brothel after the first of the year.

Davis said, “she wants to add two men to the three women she currently has living” at the bordello.  Who better to help the Madame identify candidates for the job than Senate Majority Leader Harry Reid who, like Bonni Davis, can recognize a penny-candy hustler a mile away?

Like a pimp, Monsieur Senator Reid employs, “psychological intimidation, manipulation and force” to coerce resistant Senators into signing onto the health care reform.  Harry Reid has successfully overseen a federal escort service where Senators receive sordid gain providing services, in the form of votes, to liberal political Johns on Capitol Hill whose intent is to ravage the nation’s freedom, security and economic stability.

Luckily for Bonni Davis, Reid has more than a few candidates who meet the cathouse criteria for employment. Wooly Mammoth Ben Nelson would be attractive to a small, but specific group of clientele, while the Bernie Sanders type might be alluring to those who typically prefer Ben and Jerry to Ben Nelson. The Senator from Nebraska providing a more conservative addition to Davis’ stable of male workers than the liberal Bernie Sanders, I-Vermont who proudly professes, “Yeah, I wouldn’t deny it. Not for one second. I’m a democratic socialist.”

Senator Bernie Sanders supports a single-payer system and a Medicare buy-in provision. Contrary, to Ben Nelson’s complaint, the Vermont Senator considers the legislation too conservative, or not liberal enough. Sanders said, “I’m struggling with this…as of this point, I’m not voting for the bill… my vote is not secure at this point.”

Mandatory requirements for liberal support have always been Medicare expansion and the public option. Harry Reid slashed both, while working the senate strip-attracting centrist votes from moderate senators like Louisianan fille de joie, Landrieu and the rent-boy from the Nutmeg State, Joe Lieberman. Bernie Sanders being “undecided” about the health care vote did not present a predicament for Monsieur Reid who is adept at initiating hesitant values virgins into prostituting principles with piggy payoffs.

Harry Reid wooed Democrat holdout, Bernie Sanders, by flashing a gold tooth and a fat money clip.  The Senate Majority Leader ushered a “…clearly more enthusiastic” Sanders toward a ‘sweetheart deal’ in the form of “$10 billion in new funding for community health centers.” Bernie Sanders, who vehemently opposed the bill a day prior, was gently initiated into a 60-vote quorum.  A tossle-headed Bernie emerged from negotiations breathless and disheveled unabashedly transitioning from a cabin of personal conviction in Vermont into Harry’s Washington DC house of joy.

Proprietor of the Shady Lady Ranch, Bonnie Davis, remains hopeful that men can start working at her brothel at the beginning of the New Year. Ms. Davis contends, the state of Nevada, like the Democrat run Senate has, “…worked hard for years to make the traditional brothel business…socially acceptable and something we can be proud of.”

Currently, Davis has five bedrooms to fill with male and female strumpets. $100 million dollar courtesan Mary Landrieu was recommended by Reid last month for one of the openings and is currently in the process of negotiating salary and seriously considering, if need be, accepting an offer to shift from a Senate seat into a niche in the iniquitous desert den. Clearly, bawdy harlots like Ben Nelson and Bernie Sanders would gladly join Mary and submit to selling services to anyone willing to pay the price.

Right now, Madame Bonnie Davis is in a unique position of being the recipient of Nevada State Senator Harry Reid, overseer of a senatorial House of Ill Repute providing his state’s Brothel Owners Association with two highly experienced male gigolos Ben Nelson and Bernie Sanders. Davis, anxious to bring both guys onboard, has just one last quandary to surmount regarding, “…how to structure the men’s pricing?” Bonni can count on Reid to help out in that area too, because if anybody knows how much to pay male prostitutes, Harry sure does.